Harvey Weinstein With One of His Accusers | Law & Crime 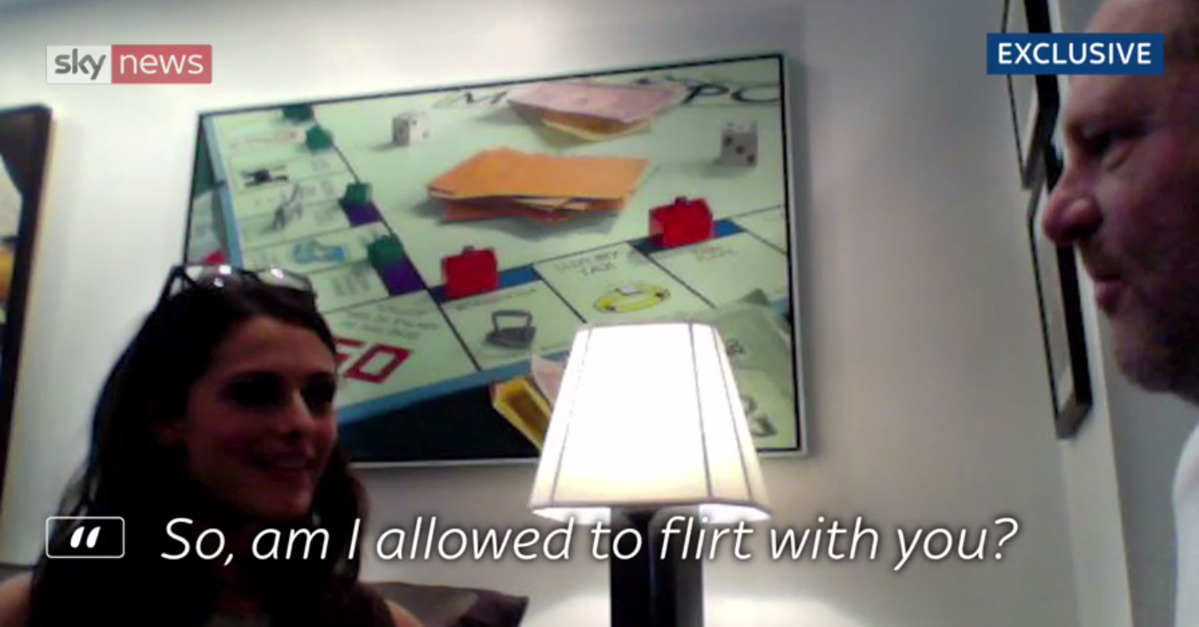 Footage obtained by London-based Sky News shows Harvey Weinstein “behaving inappropriately” with a young woman apparently under the pretenses of a business meeting.

In the 8-and-a-half-minute-long video, Weinstein appears to hug, touch and make sexually suggestive comments to 28-year-old Melissa Thompson. You can watch a snippet of the video below.

Thompson had arranged the meeting with the Weinstein Company in order to pitch her start-up’s new video platform and analytics service. She recorded the meeting as part of the demonstration. But whereas Thompson had been scheduled to meet with the production company’s entire marketing team, instead, Harvey Weinstein arrived alone.

Thompson agreed to meet with him anyway–and the camera kept rolling, apparently without Weinstein’s knowledge. Hours later at a nearby hotel, Thompson says, she was raped.

Things quickly devolve from there. As Thompson offers a handshake, the disgraced Hollywood mogul bats her outstretched palm away and leans in for a hug. Weinstein then precedes to run both hands down Thompson’s back. While doing so, Weinstein mutters, “That’s nice. Let’s keep it up.”

At another point in the video, Weinstein asks, “So am I allowed to flirt with you?”  Thompson pauses for a few beats before replying, “Umm…we’ll see…a little bit.” Weinstein then dials it back, saying, “A little bit, not much, right? Okay then, alright, I won’t. So what do you want anyway?”

At another point, Weinstein appears to touching Thompson somewhere off camera as the two discuss the possibility of using Thompson’s service for a film about Marilyn Monroe. During this apparent groping episode, Weinstein says, “It’s fun when we do this,” as he leans forward in a motion that suggests he’s running his hands along Thompson’s leg.

Now I see he’s trying, in any way he can do, to move me into that zone of comfortable then uncomfortable and confused, and vulnerable, and recognizing that he’s powerful and I’m not, and that I need this deal from him, and he has the power to give it to me.

At another point in the video, after Thompson playfully shoves the ex-mogul’s shoulder and mentions how “data is so hot,” Weinstein says, “Let me have a little bit of you. Give it to me. It’s okay, would you like to do it some more?”

When asked if she believed she had encouraged him, Thompson said, “I don’t think I purposely encouraged him. I think there was a combination of confidence and naivety that led me to this dynamic that we see now, watching back.”