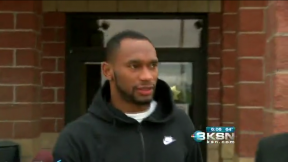 NFL running back Joseph Randle was arrested in Kansas Sunday morning for the fifth time in 17 months. Wichita’s KAKE News reports that three individuals told police that Randle, 24, struck them with his car, and then chased after them as they ran into their home. He was charged with aggravated battery, criminal damage to property, and drug possession.

The Dallas Cowboys released Randle in November, and this is his third arrest since then. According to CBS Sports, he was picked up on an open warrant for a speeding charge earlier this month when he showed up uninvited at an ex-girlfriend’s apartment, and was arrested in November, soon after being let go by the Cowboys, after an altercation at a Kansas casino.