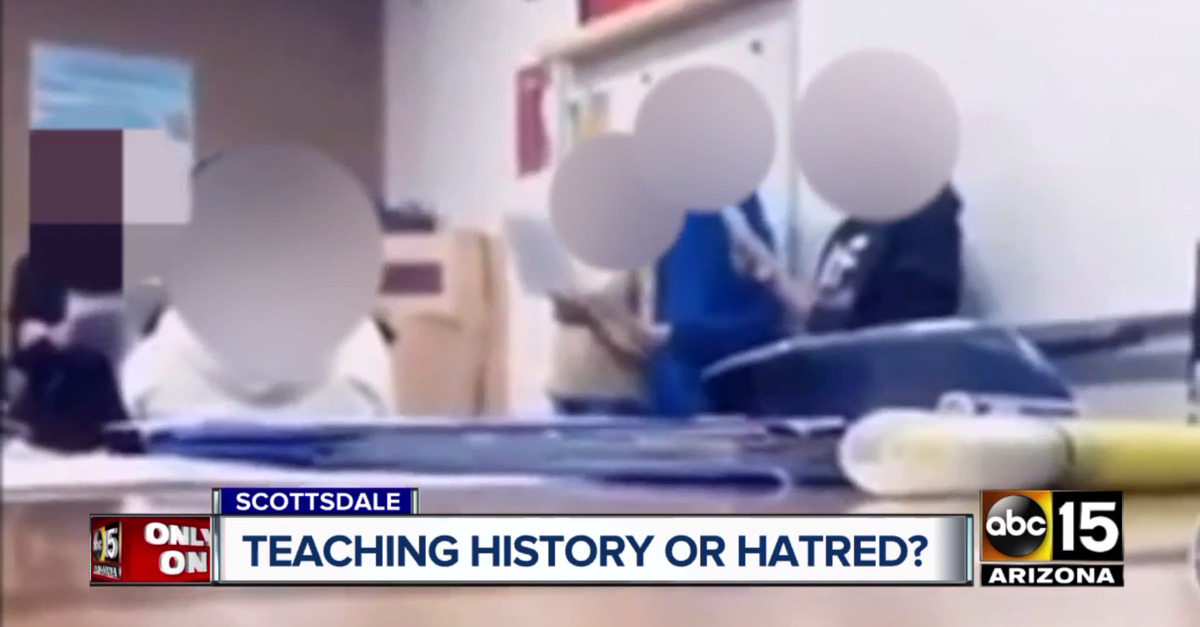 An Arizona middle school is apologizing after forcing white students to use the n-word during a lesson on the Civil Rights movement.

According to local ABC affiliate KNXV, Mountainside Middle School Principal Terri Kellen penned an apology letter to parents two days after the controversial lesson occurred. Many parents had already raised concerns with the administration after a video of the incident achieved a fair amount of local notoriety.

In the video, several white students repeatedly say the n-word. Many of them giggle while doing so.

The apology letter was obtained by the outlet and reads, in part:

Mrs. Miller supplemented a lesson with multiple perspectives on an incident that took place in 1957 at a school involving an African American and white child. These perspectives included quotes directly from the primary sources and some of the quotes used the ‘n’ word. This lesson was taken straight from Stanford Education with excerpts from the PBS documentary ‘Eyes on the Prize.’ Part of the intent of the lesson was to teach history of why and how this word is racist and offensive. The teacher spent a great deal of time setting up this lesson so students were prepared for the actual quotes used in this incident. We recognize the use of the factual quotes was not the way to teach this lesson. The quotes with the ‘n’ word made a lot of our students feel uncomfortable and offended. We apologize for putting students in the position of using these factual quotes with the ‘n’ word. We will change this lesson and still uphold the purpose of this lesson to teach our students how racist and offensive the ‘n word is. Mrs. Miller, Mrs. Kaiser and I spoke briefly to each class today apologizing and recognizing using these quotes was a mistake. Please know and believe Mountainside does not condone any racist and offensive language on campus.

The apology from the administration notwithstanding, the incident and the video have created a decidedly uncomfortable atmosphere for the school’s African-American student body.

Eighth grader Essence Williams wasn’t in the class that was being taught the lesson, but says she saw the video and heard the giggles of white students as the insensitive footage played.

“Everybody saw it,” Williams told KNXV. “One of my friends was like, ‘why are you making such a big deal out of this?’ I was like, ‘How do you not understand that this is a problem?'”

“They took it for a joke,” she told the outlet. “They thought it was okay for them to say it, like the one opportunity that they had. And all around my school, I hear people throwing out the word like it is okay and it’s not.”

“Did they really effectively learn the lesson, or did they just make a mockery of something,” Eshekiah Herron, Williams’ mother, asked out loud. “This is a place of learning, not a place where kids should feel humiliated or hurt after a lesson has been taught.”

The school says they will now work with parents to develop a new curriculum around Civil Rights history–and the lesson plan involving the n-word won’t be used in the future.