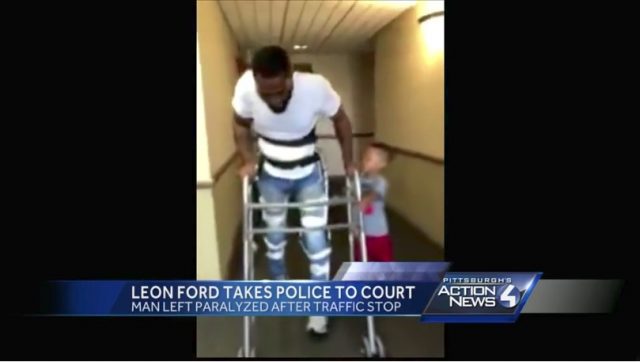 PITTSBURGH (AP) — A black man shot by one of three white police officers involved in a November 2012 traffic stop was wrongly “terrorized” and “ultimately paralyzed,” his attorney said Tuesday in closing arguments of his civil-rights trial against two of the officers.

Only Officers David Derbish and Anthony Miller face potential liability for the injuries suffered by Leon Ford. The third officer, Michael Kosko, was dismissed by the judge before trial because he wasn’t involved in the struggle that led Derbish to shoot Ford and was absolved of wrongful-arrest claims because Ford wound up being convicted of minor traffic violations.

Still, Ford’s attorney Fred Rabner told the jury on Tuesday the officers were “pals” who covered up wrongly detaining Ford because they thought he was a gang member with a similar appearance, age and name — Lamont Ford Jr.

“Leon Ford was the victim of three rogue cops,” Rabner told the jury, which has no black members. “Despite Leon doing everything right, they intimidated him, they threatened him, they terrorized him and, ultimately, they paralyzed him.”

Ford, who’s 24, is a paraplegic and must use a catheter six times a day, interrupting his sleep; must manually clear his bowels; has no sexual function; and faces a life expectancy of about 62 years, or about 16 years less than average, Rabner told the jury.

The officers’ attorney Paul Krepps defended their actions, saying the traffic stop was 15 minutes and Derbish shot Ford during a frantic seven-second interval when Ford’s car drove forward as the officer struggled to pull Ford from the vehicle.

Krepps reminded the jurors that, under the law, they must judge the officers’ actions “from the perspective of a reasonable officer on the scene.”

Miller is accused of assault and battery for trying to drag Ford from the car, while Derbish is accused of using excessive force in shooting Ford five times during the ill-fated stop.

Rabner contends Ford was wrongly pulled over because Kosko and Miller, who were out patrolling, had been unable to catch anything while they were “hunting and fishing” near the end of their shift.

Kosko mistook Leon Ford for the gang member, who has since died, and Miller couldn’t be sure of his identity. Rabner ridiculed that, noting Miller had interacted with Lamont Ford — as had Derbish, who Miller called to the scene to clarify matters after Leon Ford produced a valid driver’s license, registration and insurance card.

Rabner noted the gang member’s skin was “caramel-colored” compared with his client’s dark brown complexion and the men’s heads and ears were shaped differently despite police testimony the men looked “strikingly similar.”

Eventually, Miller and Derbish tried to pull Ford from the car so they could frisk him after they claimed to notice in his sweat pants a “bulge” they believed could be a gun. Ford testified he was afraid to leave the car because the officers refused to believe who he was despite the legal identification he politely gave them.

As Miller tugged on Ford from the driver’s side, Derbish climbed in the passenger’s side and shot Ford when the car suddenly sped forward. Rabner contends the car was inadvertently knocked into gear during the struggle, though Krepps and the officers contend Ford tried to escape.