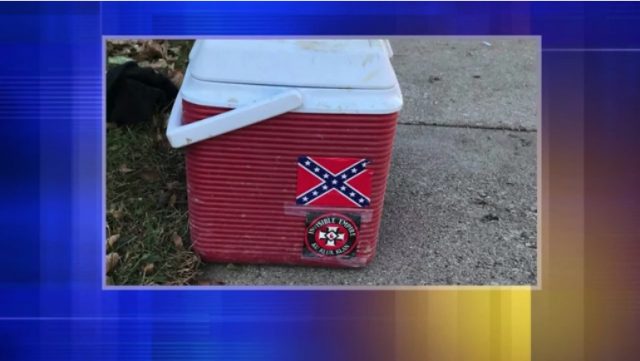 A contractor employed by the City of Milkwaukee was fired after bringing an ice chest adorned with Confederate flag and Ku Klux Klan stickers to a work site.

The name of the worker has not yet been released, but his employer, American Sewer Services, said he was “immediately terminated” in a statement provided to the local Fox affiliate. An additional statement from the company reads:

I share the outrage expressed by city leaders over this disturbing display of hate speech. It in no way represents the feelings of American Sewer Services nor our diverse group of employees. The offending employee was immediately dismissed because of his inappropriate actions.

This afternoon, the City of Milwaukee became aware of this photograph posted on social media. The stickers are offensive to the Administration and DPW. If, in fact, the cooler with the stickers belongs to an individual working on a City contract, it would be best if the individual works someplace other than the City of Milwaukee. DPW continues to investigate this matter.

Another statement, released by Alderman Tony Zielinski, called for a review of public works projects that have been outsourced to private contractors. He said, “I am very concerned that the workers working on projects in the city no longer reflect the population of the community they are serving.”

In the aftermath of the firing, and a separate incident involving workers with a gun on a work site, American Sewer Services has been called to appear before a special Steering & Rules Committee meeting today.

As trade unionists, we don’t usually like to see a union brother get fired. But if you’re a Klansman and you’re a threat to our fellow workers…you’re not our union brother. That sticker represents 150 years of Klan terror.We wanted to send a strong message that Nazis, fascists, Klansmen supporters are not welcome in the labor movement.