Trumps Says It Would Have Been a ‘Beautiful, Beautiful Sight’ If Club Attendee Shot Orlando Shooter in Face 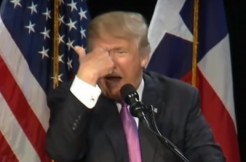 At a rally on Friday night, Donald Trump said it “would have been a beautiful, beautiful sight” if an attendee at the Pulse nightclub shot the mass killer Omar Mateen in the face last Sunday. Fantasy aside, though, he followed up by saying he’d “preserve” the Second Amendment as president.

He told a crowd at Woodlands, Texas the following:

You can see a clip below from Right Side Broadcasting:

The reference to magazine sizes is interesting. According to the Law Center to Prevent Gun Violence, eight states and the District of Columbia generally ban high-capacity magazines, with certain exceptions. Depending on the jurisdiction, “high capacity” might mean anything with more than 10 or 15 rounds.

Mateen killed 49 and wounded 53 people at a gay nightclub in Orlando, Florida. In a 911 call, he voiced his support for the terrorist organization ISIS. It’s the deadliest mass shooting in U.S. history.