This Little Clause Might Save Sen. Bob Menendez from Corruption Charges 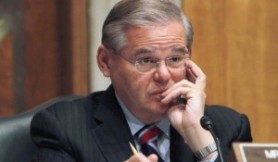 U.S. Senator Bob Menendez‘s lawyers go to a federal appeals court Monday. Three judges will look at how far how his legislative work can shield him from prosecution. He faces a dozen charges, including bribery, conspiracy, and honest services fraud.

The ironic thing is what his attorneys will use to protect him: the speech or debate clause of the U.S. Constitution.

Look at it, from Article I, Section 6: Senators and House Representatives “shall in all cases, except treason, felony and breach of the peace, be privileged from arrest during their attendance at the session of their respective Houses, and in going to and returning from the same; and for any speech or debate in either House, they shall not be questioned in any other place.”

Most important for this case, it can keep acts done for the legislature from being included as evidence in a trial. It’s an anti-corruption text, actually intended to protect legislators from crooked adversaries who want them behind bars.

“Every act the indictment alleges Appellant and his 13 staffers took was designed and intended to influence the Executive Branch in Melgen’s favor,” prosecutors wrote. “The Speech or Debate Clause cannot save Appellant from its charges.”

Kindly remind yourselves that Sebelius and Tavenner would have been acting under the president’s umbrella here, not Congress’, so the speech or debate clause might not work as a defense. Of course, Menendez’ attorney say his hands are clean, and have managed to postpone a trial scheduled for 2015. Hence, why the appellate judges are looking at this case now.

“The challenge [for the prosecution] is going to be showing that Menendez was doing something different or out of the ordinary for this particular constituent as opposed to what a senator or congressman does generally,” said Lee Vartan, a former U.S. Attorney, to the Associated Press. Menendez’s case might be stronger than the Justice Department insists. “I think he has a shot, given the fact there’s not a lot of case law. It’s uncharted territory to some degree.”

The Senator’s office have always claimed he was innocent. “As we have said before, we believe all the senator’s actions have been appropriate and lawful and the facts will ultimately confirm that,” wrote Tricia Enright, his communications director, right before the criminal charges were filed in March, 2015.