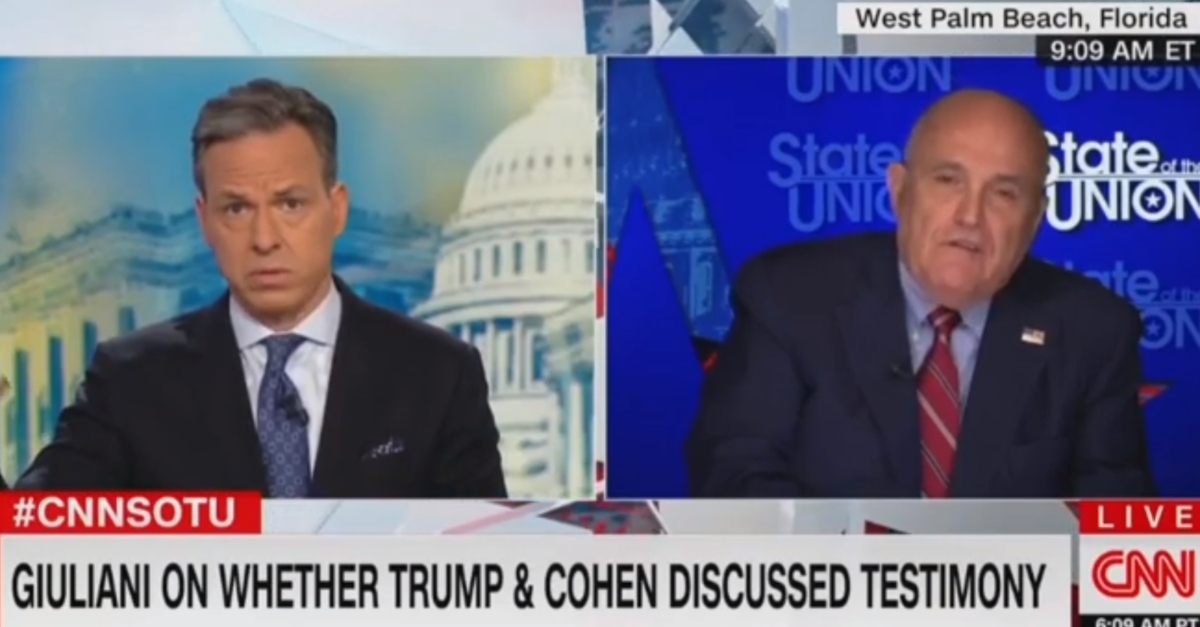 Conservative attorney George Conway, husband of high-ranking Trump adviser Kellyanne Conway, voiced shock at a new claim by the president’s personal lawyer Rudy Giuliani. Giuliani suggested that it would have been “perfectly normal” had the POTUS discussed congressional testimony with Michael Cohen.

“Perfectly normal?” It’s perfectly insane for witnesses in or subjects of a criminal investigation to be discussing testimony. https://t.co/FlNP2GC2TZ

Cohen, a former personal attorney to the president, pleaded guilty in November to lying to congressional investigators about the real end date of discussions over a possible Trump Tower deal in Moscow. He said January 2016. It was actually June of that year, prosecutors said. In a new BuzzFeed report, two law enforcement sources claimed that the office of Special Counsel Robert Mueller learned from evidence that Trump ordered Cohen to lie to Congress about the Russia project. Witnesses, internal Trump organization emails, texts, and other documents presented the basis of this allegation, sources said. Cohen reportedly confirmed it with prosecutors.

Pundits and Trump critics leaped on the report as evidence the president did something patently impeachable, but Mueller’s office pushed back on it.

“BuzzFeed’s description of specific statements to the Special Counsel’s Office, and characterization of documents and testimony obtained by this office, regarding Michael Cohen’s Congressional testimony are not accurate,” spokesman Peter Carr told Law&Crime in a statement. That push back is a very rare move for a spox who usually declines to comment on Mueller stories. He reverted his default when we asked for clarification on how the BuzzFeed reporting is inaccurate, and Carr said he didn’t have any addition information beyond that statement.

With that in mind, Giuliani appeared Sunday on State of the Union for a roller coaster of an interview. The lawyer denied the president directed Cohen to lie, and that if they did talk, it would have been “about the version of the events that Michael Cohen gave them which they all believe was true.”

“You just acknowledged that it’s possible that president Trump talked to Michael Cohen about his testimony,” host Jake Tapper said.

“Which would be perfectly normal,” Giuliani said. “Which the president believed was true.”

“If you and another person are under criminal investigation and you discuss his testimony with him, you should expect prosecutors to investigate that conversation to determine if you obstructed justice,” he wrote in a post retweeted by Conway.

Conway followed up a reference to Giuliani’s past as a federal prosecutor and mob-buster.

“I’m trying to imagine what the reaction of the United States Attorney for the Southern District of New York in 1988 would have been to this ‘perfectly normal’ assertion—and just can’t,” he wrote.

Mueller’s office is investigating Russian interference in the 2016 presidential election, and that includes whether the Trump campaign colluded in efforts. The president and his spokespeople call the probe a “witch hunt” by Democrats, and categorically attacks news outlets that carry negative coverage. Meanwhile, Trump and Cohen are on the other side of a public falling out, in which the lawyer implicated the president in campaign finance violations. BuzzFeed has double-downed on their reporting.

Leave it to Rudy to destroy the momentary respite that BuzzFeed had given his client.