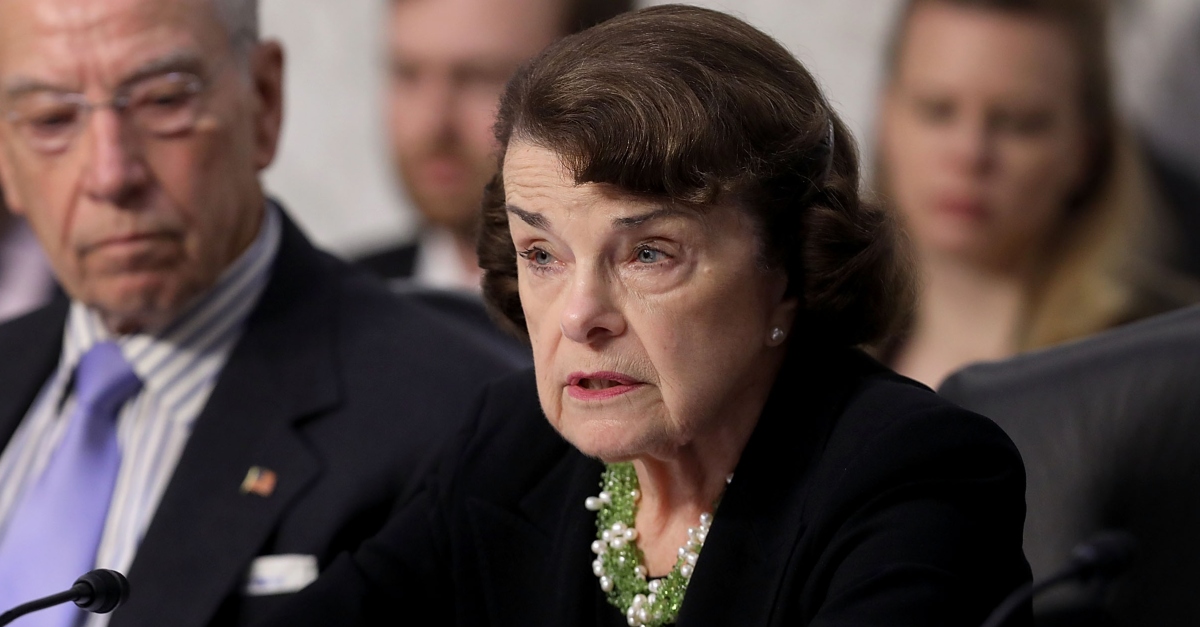 Sen. Dianne Feinstein, the ranking member of the Judiciary Committee, said Sunday afternoon that the FBI should investigate the sexual assault allegation against Supreme Court nominee Brett Kavanaugh before the Senate can move forward on his nomination.

INBOX: @SenFeinstein on the decision of Brett Kavanaugh’s accuser to speak out. pic.twitter.com/klw5SAnp3b

Feinstein wants FBI to review allegation as part of his background check investigation — not criminal, which the FBI is not doing anyway. https://t.co/O0YV2IYatx

This comes after Kavanaugh’s reported accuser stepped forward, and was identified in a Washington Post interview as Professor Christine Blasey Ford. According to the outlet, she contacted them through a tip line back in early July, reached out to her U.S. Rep. Anna Eshoo (D-California 18th District), and sent a letter to Sen. Feinstein. But in her letter, she wanted the allegation kept quiet. She said she decided by August not to publicly step forward because of the effect it might have on her and her family, she said.

But that didn’t stop reporters from finding out about Ford’s letter. Debra Katz, her attorney, said she believes that Feinstein honored the request to keep it a secret, but suggested that “others did not.”

Ford decided, amid heightened scrutiny, to finally talk on the record.

She said that Kavanaugh pinned her to a bed and tried to remove her clothes while his friend Mark Judge watched. Ford said this happened at a party, and though she doesn’t quite remember some of the specifics because of the passage of it, said it likely happened in 1982.

Both men flatout denied the allegation before Ford went public.

So, what now? Republicans command a slight majority in the Senate. Any partyline vote would tilt against Kavanaugh if even two GOPers choose not to support him.

“To railroad a vote now would be an insult to the women of America and the integrity of the Supreme Court,” he says in statement.

Judiciary Republicans, on the other hands, say they are ready to move forward, and voiced disbelief at Ford’s story.

To repeat: What now?

So Ford’s story can play out now in three venues: TV morning shows, SJC hearing or fake hearing set up by Dems with empty chairs for GOP. Which is it going to be? Maybe GOP decides on the hearing, maybe Kavanaugh bows out. But the jam-through at this point is gonna be noisy/rough

Note: We added clarification that Feinstein wants the FBI to look into the sexual assault allegation as a background check, not a criminal matter.