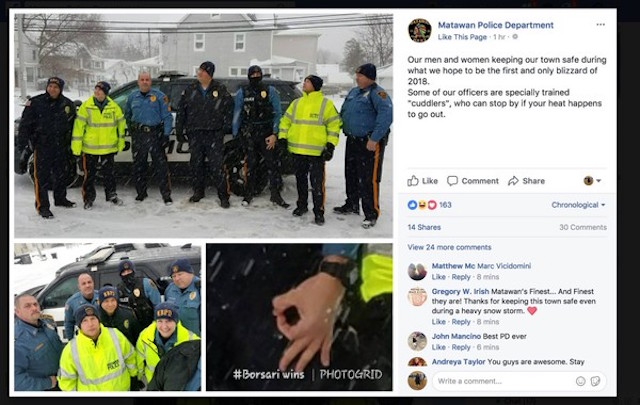 A police department in New Jersey took down a Facebook post yesterday afternoon which contained a hand gesture seen as racially offensive due to its association with white nationalist movements.

The Matawan Police Department (“MPD”) posted a jovial picture of multiple officers posing amidst the blizzard caused by Winter Storm Grayson on Thursday. The caption referred to the officers as “specially trained ‘cuddlers'” who citizens could call on to assist with warmth in the event of a home losing heat.

But seemingly lurking beneath the playful atmosphere of the post on the MPD’s typically tongue-in-cheek Facebook page was a hand gesture that’s been identified as code for supporters of the white nationalist movement–an upside “OK” symbol.

Internet users were aghast–if not entirely shocked–at the police department’s apparent sanction of white nationalism. And so the complaints poured in. In response to those complaints, Monmouth County Police Chief Jason D. Gallo had the post removed.

Aside from the hand gesture’s relatively newfound significance as a symbol for white power supporters to identify one another, the upside-down “OK” symbol has a much longer history as the focal point of the circle game.  Similar to other children’s games like slug bug, the circle game involves punching people who happen to run afoul of the game’s rules.

In slug bug, you get hit whenever someone identifies a Volkswagen Beetle and then verbally notes the sighting before anyone else. With the circle game, an upside down “OK” symbol is made below a player’s waist. If anyone catches sight of that upside-down “OK” gesture, they get hit.

The circle game, Gallo claims, is what the officer in question was trying to convey in the photo. He said:

The circle game, that kids play in school. Someone tried to say it was something racial. It’s just ridiculous. Unfortunately something nice turned into us being in the news. That’s why a lot of departments are not on social media.