Trump May Not Be Totally Wrong About Prosecuting Comey 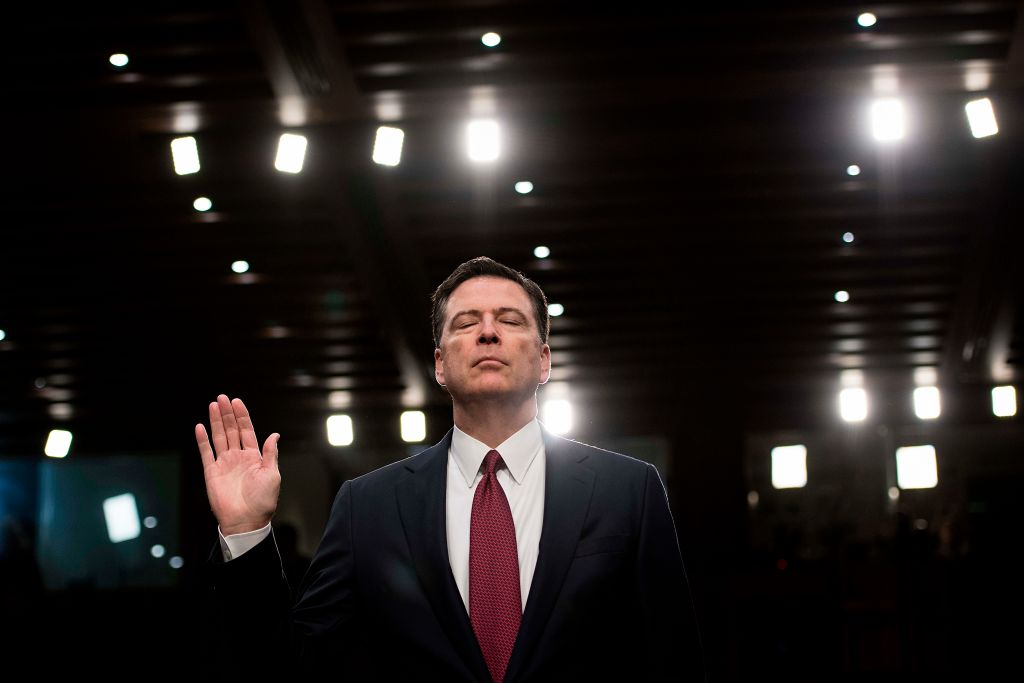 When a sitting president of the United States cavalierly calls for the criminal prosecution of a former FBI-head via Twitter, it’s easy to discount those demands, even when they are in all-caps. There’s no question that Trump’s behavior is unhinged, unprofessional, and undignified, or that actual criminal prosecutions warrant more care than an early-morning social media post; but this is the world we live in now.

….untruthful slime ball who was, as time has proven, a terrible Director of the FBI. His handling of the Crooked Hillary Clinton case, and the events surrounding it, will go down as one of the worst “botch jobs” of history. It was my great honor to fire James Comey!

The infantile nature of Donald Trump’s behavior aside, the truth is that criminal prosecution of James Comey isn’t a definite no-go. Back when news of the Comey Memos broke, it was reported that the former director authored seven memos recording his personal recollections of is conversations with President Trump.  It has been widely reported that at least four of those memos had markings making clear they contained information classified at the “secret” or “confidential” level.

The problem there is that Comey testified under oath that the memos were unclassified personal documents. Here was the exchange on Capitol Hill:

WARNER: And I — I found it very interesting that, in the memo that you wrote after this February 14th pull-aside, you made clear that you wrote that memo in a way that was unclassified.

If you affirmatively made the decision to write a memo that was unclassified, was that because you felt, at some point, the facts of that meeting would have to come clean and come clear and actually be able to be cleared in a way that could be shared with the American people?

COMEY: Well, I remember thinking, this is a very disturbing development, really important to our work. I need to document it and preserve it in a way — and — and this committee gets this, but sometimes when things are classified, it tangles them up. It’s hard…

Here’s the problem: lack of clarity is fertile soil for accusations of perjury.

Comey clearly took an oath. The Senate Select Committee on Intelligence is clearly a competent tribunal authorized to administer an oath. Comey gave both written and oral testimony. The only things up for discussion are: 1) whether Comey stated anything that he does not believe to be true; and 2) whether, if so, those things count as “any material matter.”

I think we can all agree that Comey’s testimony, which centered around about private meetings between himself and Donald Trump, and about the Hillary Clinton email investigation definitely constitutes “any material matter.” Demands or pledges for loyalty, directions or acquiescence to back off an ongoing investigation, or the non-existence of such interactions is about as material as it gets. For a perjury charge, it all comes down to whether James Comey stated anything he does not believe to be true.

Comey’s enemies will likely complain that his testimony was untruthful and he will be left to square his sworn statements (that the memos were unclassified) with what those reviewing his memos have found (that they in fact are classified). None of this means that Comey has broken the law, because it seems clear that that Comey prepared both classified and unclassified documents. The former director said, “my view was that the content of those unclassified, memorialization of those conversations was my recollection recorded.”  Most likely, a finding of wrongdoing would depend on context, and to which information from which memos Comey had been been referring during his testimony.  If it becomes clear that Comey’s statements about the memos differs substantially from the U.S. government’s official take on those memos, that’s kind of a big deal.

Then there’s the “leaking” that has so infuriated Trump. Comey called his friend, the Columbia professor, for the purpose of communicating the existence of the memos to the press. This has potential to be a bigger problem for Comey. When Comey testified, he explained that his decision to pass information to the news media through his professor friend was motivated by the desire to move along the process of having a special prosecutor appointed.

There is also, as my Law & Crime colleague Colin Kalmbacher has pointed out, serious potential that the differences between James Comey’s and Andrew McCabe‘s account of media leaks will add up to trouble for Comey.  Standard FBI procedure dictates that all records created during official duties are government property, not to be disclosed without specific authorization. If Comey’s late-night phone call prompted his friend to divulge classified information, or information properly held with official FBI documents, there may be consequences to face. Comey is now a private citizen, so violating FBI procedure isn’t quite the same thing as breaking a law, but it’s still not good. Mishandling classified information can also be a crime. The Espionage Act, codified at 18 U.S.C. § 793(d), prohibits:

“Whoever, lawfully having possession of, access to, control over, or being entrusted with any document, writing, code book, signal book, sketch, photograph, photographic negative, blueprint, plan, map, model, instrument, appliance, or note relating to the national defense, or information relating to the national defense which information the possessor has reason to believe could be used to the injury of the United States or to the advantage of any foreign nation, willfully communicates, delivers, transmits or causes to be communicated, delivered, or transmitted … to any person not entitled to receive it, or willfully retains the same and fails to deliver it on demand to the officer or employee of the United States entitled to receive it …”

If (and at this point, it’s certainly a big “if,” given that we don’t know which information was classified or whether that was the precise information that was shared) Comey publicized information he shouldn’t have, there is at least the potential that he could (and perhaps should) be criminally prosecuted for doing so.

In the end, the word most glaringly wrong in Trump’s tweet this morning isn’t “slimeball” –but rather, “proven.”  Whatever possible exposure may be looming for James Comey, absolutely nothing has been proven.  Donald Trump’s inability or unwillingness to distinguish between those things that could be and those things that are, without concern for due process or the integrity of fact-finding is a danger in itself.