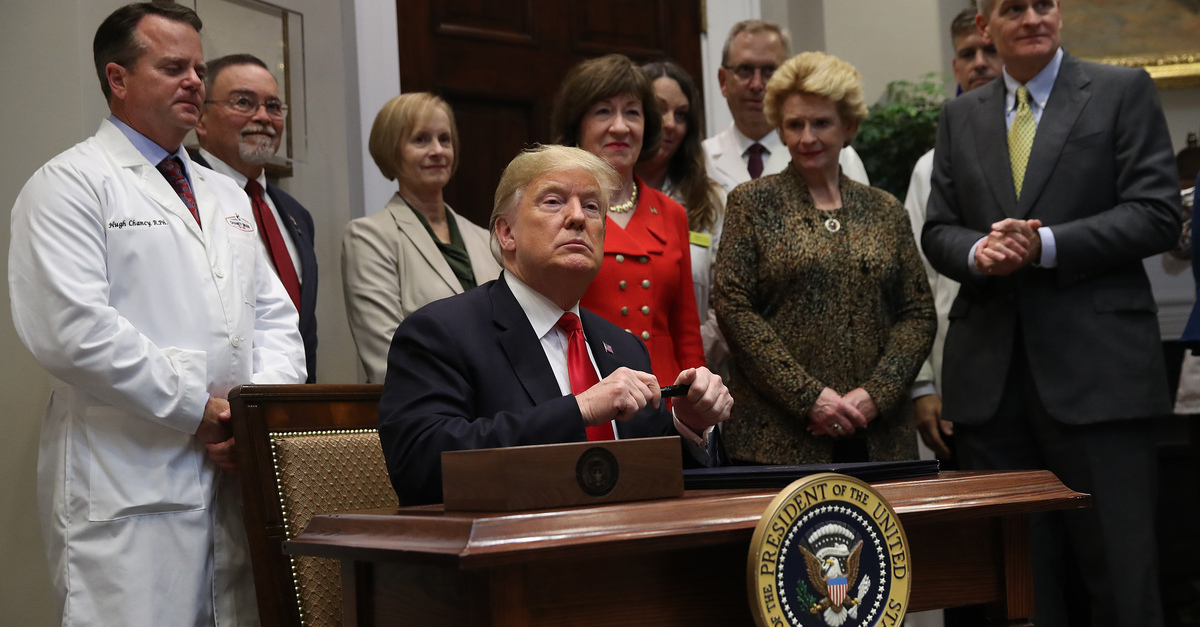 Don’t look now, but the Trump Administration is ready to do its part to improve healthcare. And by “improve healthcare,” I mean, “create rules that sound helpful, but are actually dangerous to people’s health.” The Department of Health and Human Services (DHHS) has drafted a rule that’s now at the final stages of review. That rule, originally introduced by Sen. Chuck Grassley (R-Iowa), will require pharmaceutical companies to include list prices of drugs in advertisements.

Unlike many of the Administration’s agency regulations, this one sounds good on the surface. Theoretically, the requirement would improve transparency, provide more information to consumers, and stimulate healthy competition in an industry that could use some incentive to lower exorbitant pricing.

However, there’s a lot to lose. And for an administration continually lamenting the spread of “fake news,” adopting this DHHS rule is proof that it is still quite happy living in the land of “alternative facts.”

Drug consumers don’t shop for and purchase drugs the way they do laundry detergent or shampoo; “list prices” are not real prices. Actual drug costs borne by consumers depend on a multitude of factors, including insurance coverage, coupon programs, and purchasing agreements. Different consumers are likely to pay different prices for the same drug. And there is very real danger in publicizing inaccurate price information for medications: ad-induced sticker shock will deter those in need of medical care from seeking it in the first place.

In an interview with The Hill, Dan Jaffe of the Association of National Advertisers cautioned a potential consequence of spreading this kind of misinformation:

The numbers that would be providing to the public would be very misleading and might even be detrimental in the fact that if the price was very high, but they wouldn’t have to pay that high price, they might not even go to their doctor and try to get treatment.

Jaffe’s point isn’t one that requires industry expertise to understand.

@POTUS @realDonaldTrump Maybe drug companies could lower their prices if they stopped spending so much on unnecessary advertising to prospective patients on TV. Doctors are the only ones who need info about what drugs might be able to do for us. #MAGA

In addition to the dangerous practical results likely to be caused by DHHS’ rule, several groups have argued that it also raises First Amendment concerns in that it is improperly tailored so as to target television commercials, but not internet or print ads. The groups have a point; mandatory disclosures like the ones contemplated would require a showing not only of an important governmental interest, but also one that the regulations are appropriately tailored to achieving that interest.

In a challenge to these regulations, it would be difficult to imagine a convincing argument that television viewers need pricing information, but that website readers do not.  Such a glaring inconsistency would threaten the legality of such a rule at even the lowest levels of legal scrutiny.

Advertising regulations aren’t the only questionable government actions affecting the pharmaceutical industry this week. House Republicans are also siding with big pharma over their Democratic committee members. On April 5, Republicans on the House Oversight Committee warned drug companies that Committee Chairman Elijah Cummings (D-Maryland) is after them.

In a letter sent to a dozen big pharma CEOs, House Freedom Caucus leaders Jim Jordan and Mark Meadows told the CEOs that they felt “obliged” to reveal that when Chairman Cummings began investigating pharmaceutical pricing, he had done so without asking permission from the GOP; the result, according to Jordan and Meadows, is that Cummings’ requests could harm pharmaceutical profits:

As we understand the Chairman’s request to you, he is seeking a wide range of highly sensitive business-proprietary information that would likely harm the competitiveness of your business if disclosed publicly.

So that definitely seems weird.

I can’t remember this ever happening before. Republicans in Congress are encouraging pharmaceutical companies not to cooperate with an investigation into drug prices.

Once again, they’re siding with Big Pharma at the expense of the American people. https://t.co/ZE1psCT8G6

Cummings commented on the Jordan-Meadows letter to BuzzFeed News, writing, “Rep. Jordan is on the absolute wrong side here. He would rather protect drug company ‘stock prices’ than the interests of the American people.”