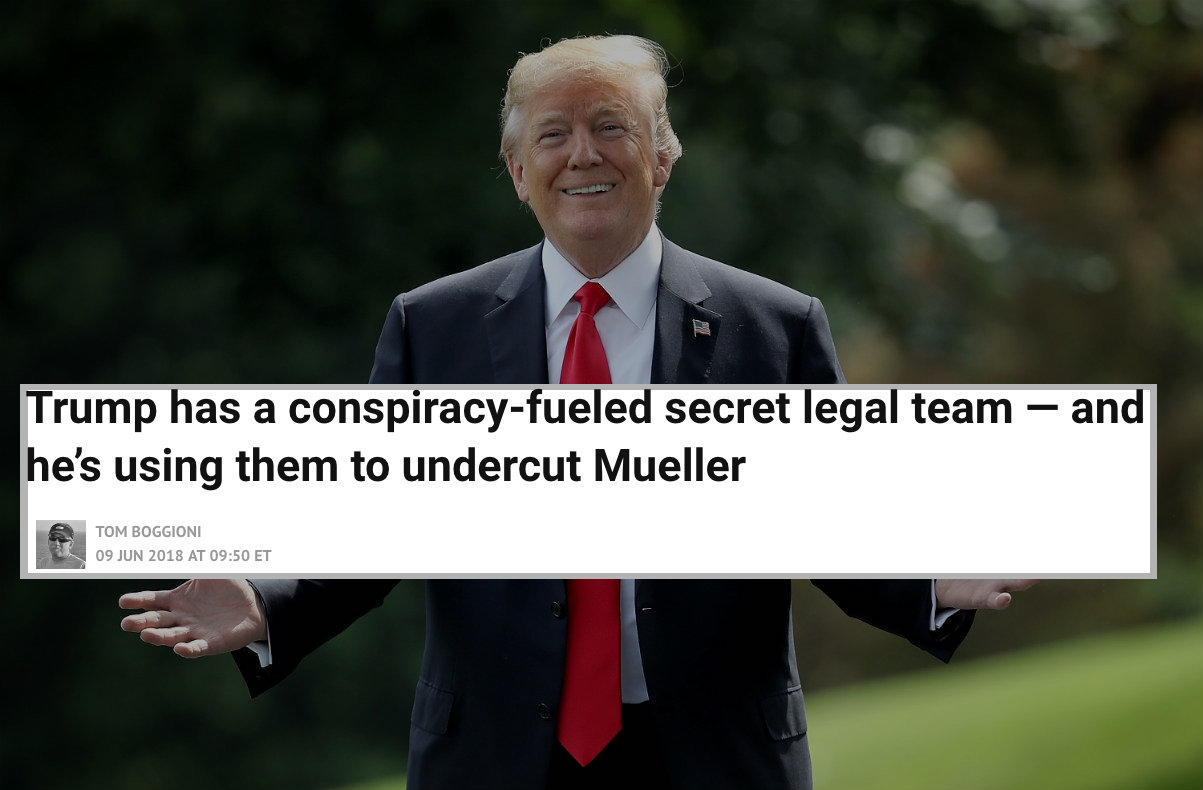 Online news organization The Raw Story ran an article this morning with the headline, “Trump has a conspiracy-fueled secret legal team — and he’s using them to undercut Mueller.” That’s a shocking charge and it’s just not true.

The Raw Story’s accusation is sourced from an earlier Politico article released Saturday morning. That first article is titled, “Forget Rudy: Here are Trump’s fiercest defenders.” Politico’s piece is a relatively brief profile of husband-and-wife attorneys Joseph diGenova and Victoria Toensing, both of whom frequently defend President Donald Trump on TV by verbally attacking his real and perceived detractors.

That original story, by journalist Darren Samuelsohn, contains one reference to the alleged conspiratorial proclivities of diGenova and Toensing. While remarking on President Trump’s decision not to hire diGenova as part of his official legal team (after Trump attorney Jay Sekulow announced such a hire was imminent), Samuelsohn notes:

Trump lawyers argued against their selection, citing their fondness for conspiracy theories. Philip LaCovara, a former counsel for the Watergate prosecution team and a former law partner of Toensing who has known the couple for 30 years, said that diGenova in particular “used to be more mainstream, but the ensuing decades [has shown] a bizarre tendency to spot demonic conspirators lurking behind every bush.”

That paragraph more than accounts for The Raw Story’s claim that diGenova and Toensing are “conspiracy-fueled.” (The Raw Story also cites a recent CNN appearance where Toensing disparages James Comey and former special counsel Patrick Fitzgerald as “two of the most despicable, despised, unethical prosecutors to ever come down,” which, while not particularly evidence of conspiracy-minded thinking, is certainly at odds with most public perceptions of Patrick Fitzgerald.)

As for the claim that both attorneys comprise a “secret legal team?” That idea appears nowhere in the Politico article–nor does any permutation or synonym of the word “secret.” In fact, the word “secret” only appears once in The Raw Story’s own article: in the headline.

In The Raw Story’s piece, author Tom Boggioni refers to diGenova and Toensing as Trump’s “shadow lawyers” and claims they “aren’t on the Trump payroll, but do his bidding nonetheless.” DiGenova appears to have invited such a characterization by once stating he and Toensing were “playing the role of lawyers on television and in real life.”

DiGenova and Toensing’s role as lawyers “in real life” is a bit limited. According to Politico, Trump’s lead attorney, Rudy Giuliani, described the Trump-diGenova-Toensing relationship like this, “He’ll call four or five people like Joe and say, ‘What do you think? So and so says this. Who’s right?’” Giuliani also added that diGenova and Toensing have sent him legal advice on how to deal with Mueller and that they have consulted with Sekulow in the past.

Aside from appearing on TV to defend Trump, diGenova and Toensing’s role as alleged “shadow” or “secret” lawyers is therefore limited to one spouse occasionally taking a Trump phone call, both sending Giuliani advice and consulting with a lawyer they were previously in contact with for hiring purposes. To be sure, some of the above sounds an awful lot like legal help, though it appears to be somewhat minimal in scope and perhaps unsolicited.

What severely undercuts this entire storyline, however, is the fact that none of it looks to be very secretive at all.

For one, the advocacy of diGenova and Toensing is mostly–and loudly–done on TV. Both attorneys appear on most of the major cable news channels with the express intent of their advocacy being known and reaching people’s ears. That’s very close to the opposite of secretive. Second, diGenova’s admission that he and his wife perform “real life” work for Trump was made publicly on WBAL Newsradio 1090 in Baltimore on April 2–over two months ago. That’s a long time to keep something secret from the media.

Furthermore, diGenova’s relationships with Trump and Giuliani have been known, acknowledged and commented on for quite some time before this latest controversy in miniature. To wit, in February 2018, poet Seth Abramson penned a viral Twitter thread floating a conspiracy theory that suggests diGenova and Giuliani were somehow behind Comey’s election eve letter to Congress regarding the reopening of the investigation Hillary Clinton‘s email server. This conspiracy theory was later regurgitated into a popular thread on leading liberal blog Daily Kos.

The Raw Story report also claims diGenova and Toensing are “working” for Trump, which is a word that typically signifies an employment relationship or at least something a bit more formal than what’s been described. Ultimately, Boggioni’s article ends with an admission of its own: most of diGenova’s efforts–and especially his effective efforts–occur on national television. In other words, the “secret” legal “work” performed by the celebrity legal couple hasn’t been particularly helpful.

Perhaps diGenova and Toensing are engaged in some sort of untoward behavior. Maybe there is a group of lawyers who could plausibly be called “secret” or who might qualify as the “shadow” bench for Trump’s legal team–though this is unlikely because of the way lawyers who work on client’s cases must conduct themselves under the ethical rules. But maybe Trump’s lawyers are the sort to whoosh past the ethical rules? Those are probably questions worth asking at this point–and if they’re not, they’ll be asked anyway. But as it stands, diGenova and Toensing are not those lawyers.

Making baseless claims about President Trump’s “secret legal team” does no one any good–except for Trump.

When liberal journalists oversell mildly scandalous–or entirely scandal-free–behavior as the cabal-like workings of shady operators with their whole hands on the scale, the annoying claims of “fake news” are easier for the MAGA-set to muster and the accurate journalism gets aside by both the yellow-tinged clickbait and resulting disinterest and disdain for the media generally.