Sen Blumenthal Suing Trump Over Emoluments, Appears to Be in ‘Violation’ Himself | Law & Crime
Opinion

Sen Blumenthal Suing Trump Over Emoluments, Appears to Be in ‘Violation’ Himself 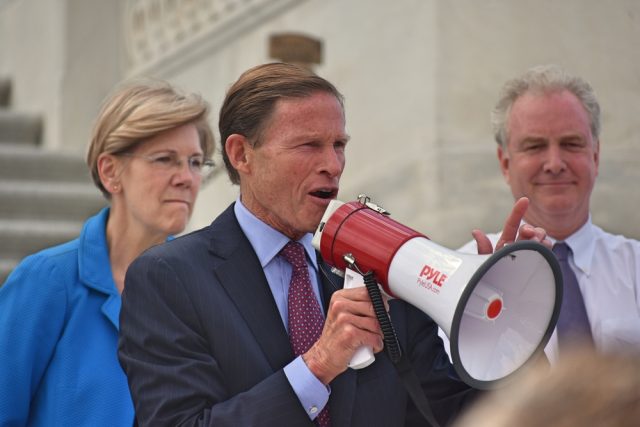 Senator Richard Blumenthal is one of the wealthiest members of Congress, with his net worth being pegged at a minimum of $67 million according to a Roll Call analysis of his financial disclosure statements. (Because financial disclosures report within broad ranges, they do not permit an exact calculation; this article says the senator’s actual net worth is more like $104 million.)

In addition to being really rich, Blumenthal is the lead plaintiff in Blumenthal v. Trump, a lawsuit brought by members of Congress against President Trump in the U.S. District Court for the District of Columbia. The lawsuit alleges that Trump is in violation of the Foreign Emoluments Clause because he “has a financial interest in vast business holdings around the world that engage in dealings with foreign governments and receive benefits from those governments.”  Because of this financial interest, plaintiffs allege, Trump “has accepted, or necessarily will accept, ‘Emolument[s]’ from ‘foreign State[s]’” within the meaning of the FEC.

The Blumenthal plaintiffs therefore assert a simple legal proposition: If a federal officeholder (a) has a financial interest in a business and (b) that business derives revenue from foreign governments, then the officeholder receives prohibited emoluments within the meaning of the FEC. Thus, for example, because (a) Trump has a financial interest in Trump Tower in New York and (b) Trump Tower has at least two tenants owned by foreign states (a Chinese bank and the UAE’s Abu Dhabi Tourism & Culture Authority), Trump “has accepted, or necessarily will accept” prohibited emoluments when those tenants make their lease payments.

This raises an obvious question. If it is that easy to receive an “emolument,” how is it that this issue has never come up before? After all, the FEC doesn’t just apply to the president or a few senior officials. The Office of Legal Counsel views the clause as applying to all federal officers and employees, meaning that millions of individuals are subject to its prohibitions at any one time. See Application of Emoluments Clause to Part-Time Consultant for the Nuclear Regulatory Commission, 10 Op. O.L.C. 96, 99 (June 3, 1986) (see also this DOD white paper on the subject).

Although not stated in the Blumenthal complaint, perhaps a limiting principle can be derived from the OLC opinions it cites. OLC has indicated “that when an employment relationship formally exists between a domestic employer and a Federal office holder, the question whether the latter may be paid from foreign governmental funds that the employer receives turns on whether the employer is acting as a mere conduit for those funds.”

It is unclear how this reasoning would apply to an owner/investor in a property or business. Let’s take the most garden-variety situation first. I am a federal employee and I own common stock in a publicly traded corporation that does business with foreign governments. One could argue that, like a partner in a law firm, I own a portion of the company and have a right to share in its profits, including profits earned from transactions with foreign governments. Presumably, however, OLC would distinguish this situation from the law partnership, perhaps on the grounds that a shareholder does not share directly in the profits and losses of a corporation and/or does not participate in the operation and management of the business. I say “presumably” less because the OLC memos compel this reasoning and more because it is unthinkable OLC would declare hundreds of thousands, if not millions, of federal employees to be in violation of the FEC merely because their portfolios or retirement plans contain equity positions in corporations that do business with foreign governments.

Although OLC provides no direct answers to these questions, it appears prior to the Trump era no one thought that mere passive investments, at least, implicated the FEC. For example, both the House and Senate ethics manuals warn members and staff that the FEC prohibits them from receiving emoluments from foreign governments. They explain that an emolument has been defined as “any profit, gain, or compensation received for services rendered” and thus members and staff “may not receive any payment for services rendered to official foreign interests,” such as making a speech or participating in a panel discussion or media event. Nowhere, however, do the ethics manuals suggest that the FEC imposes any limitation on the receipt of investment or unearned income.

The importance of this distinction is illustrated by Senator Blumenthal’s 2014 financial disclosure (the most recent I could find online). If you look at Part IIIB (Non-Publicly Traded Assets and Unearned Income Sources), pages 3-17, lines 1-450, you will see listings of numerous real estate partnerships and related investments, almost all of which fall under the umbrella of “Malkin Holdings LLC- New York, NY.” Malkin is the family name of Blumenthal’s wife, who is the daughter of New York real estate magnate, Peter L. Malkin. The Malkin family owns and controls Malkin Holdings and the extensive real estate portfolio within it.

I have neither the time nor expertise to analyze the Malkin/Blumenthal real estate empire, but let’s take a look at one important part of these holdings, an entity called Empire State Realty OP, LLP, which is referenced repeatedly in the Blumenthal financial disclosure (see lines 166, 285, 302, 378 and 430). The financial disclosure notes that this entity consists of “18 Commercial Buildings (Retail & Office) located in New York, Westchester, and Connecticut, as well as 3 real estate management companies, and a company which performs Interior Building Construction.” As best I can make out, this entity is the vehicle through which the Malkin family maintains control of the publicly traded company into which this real estate portfolio was placed (see footnotes 4, 13, 14 and 24 of the financial disclosure, indicating that the Blumenthal family received millions of units in Empire State Realty OP on July 15, 2014).

Because Blumenthal therefore has a financial interest in these 18 commercial buildings, it would appear, according to the theory advanced in the Blumenthal complaint, that each building should have a sign saying “sorry, no foreign governments or instrumentalities allowed.” I haven’t made a personal inspection, but I am guessing there are no such signs. I say this because the most prominent of these buildings, the Empire State Building, has at least one major foreign government tenant, namely China’s People’s Daily newspaper, the official newspaper of the Chinese Communist Party. (Perhaps not coincidentally, the Empire State Building has been criticized for being overly friendly to the Chinese government and its interests).

On the broad reading of the FEC advanced in the Blumenthal complaint, it would appear the senator is currently in violation of that constitutional provision. He has a financial interest in at least one business (the Empire State Building) which receives revenue from at least one foreign instrumentality (the People’s Daily). By Blumenthal’s own theory, therefore, he is receiving a prohibited emolument.

One might argue that Trump’s role in actually operating and managing Trump Tower means that he is receiving compensation for services, not merely passive or unearned income. (Of course, if he were compensated for his services through a salary from the entity that actually owns Trump Tower, the OLC analysis suggests it would not be an emolument). But this argument is harder to make since he has turned over all management responsibilities to his children. And if the fact that Trump’s children are managing Trump Tower counts against him for purposes of the FEC, wouldn’t the fact that Blumenthal’s father-in-law and other extended family members manage the Empire State Building likewise be a problem for him?

It’s going to take some constitutional fancy footwork for Blumenthal to avoid getting caught in his own web.

A version of this article first appeared in Michael Stern’s personal blog Point of Order. Stern is a former congressional attorney and legal expert. He served as Senior Counsel to the U.S. House of Representatives from 1996 to 2004.