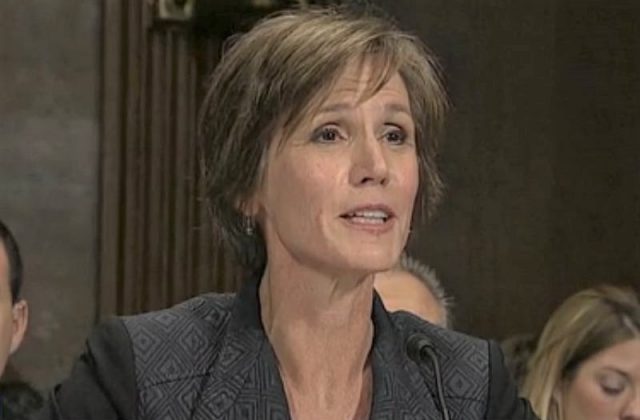 As an attorney with prior professional experience dealing with Sally Yates, I can imagine no one better who needs to be put under investigation herself. Now, information leaks that Sally Yates knew about surveillance being conducted against potential members of the Trump administration, and disclosed that information to others. Even Richard Nixon didn’t use the government agencies themselves to do his black bag surveillance operations. Sally Yates involvement with this surveillance on American political opponents, and possibly the leaking related thereto, smacks of a return to Hoover-style tactics. As writers at Bloomberg and The Week both noted, it wreaks of “police-state” style tactics. But knowing dear Sally as I do, it comes as no surprise.

According to published reports, someone was eavesdropping, and recording, the conversations of Michael Flynn, while Sally Yates was at the Department of Justice. Sally Yates knew about this eavesdropping, listened in herself (Pellicano-style for those who remember the infamous LA cases), and reported what she heard to others. For Yates to have such access means she herself must have been involved in authorizing its disclosure to political appointees, since she herself is such a political appointee. What justification was there for an Obama appointee to be spying on the conversations of a future Trump appointee?

Consider this little tidbit in The Washington Post. The paper, which once broke Watergate is now propagating the benefits of Watergate-style surveillance in ways that do make Watergate look like a third-rate effort, references the FBI “routinely” monitoring conversations of Americans if those conversations happen to be with foreign diplomats, and then notes there were “subsequent intercepts” of Flynn’s calls. The paper additionally noted Yates listened to “the intercepted call,” even though Yates knew there was “little chance” of any credible case being made for prosecution under a law “that has never been used in a prosecution.” Indeed, the paper details an apparent effort by Yates to misuse her office to launch a full-scale secret investigation of her political opponents, including “intercepting calls” of her political adversaries.

Did Yates obtain a warrant for this activity? Did she disclose to the White House she was working for (as a temporary hold-over) that she was using her office to intercept their calls whenever she could? Did she then leak intercepted calls to the press, as it is apparent she is leaking part of the story now? These are facts that call for investigation, and Yates should be a prime target of that investigation.

This concern with abuse of surveillance dominated much of the jurisprudence of Justices like Justice William Douglas. (This was the era of cinematic tours de force like The Conversation, which captured the cultural concern with so much surveillance in the new technological age). Justice Douglas’ jurisprudence, in part, led to laws like section 2511 of Title 18 of the codified United States law.This law prohibits any unauthorized interception or disclosure of communication made over the phones, in person or by electronic means. Most critically here, subsection (e) makes it a crime for anyone to “intentionally disclose, or endeavor to disclose, to any other person the contents of any wire, oral or electronic communication” even if the intercept, itself, was authorized. This is the law Yates may have violated, and certainly warrants further investigation.

This is the same Sally Yates that volunteered to stay on as a holdover to “help” the Trump transition, then refused to defend the President’s executive orders in court, ordered others to disobey his instruction to defend it, and then grandstanded in the country for personal fame for not doing her job. Now, she’s neck-deep in the Flynn scandal, and there needs to be a further investigation.  She may be deserving of her own turn as a lead character in Orange is the New Black.
Robert Barnes is a California -based trial attorney whose practice focuses on tax defense, civil rights and First Amendment law. You can follow him at @Barnes_Law