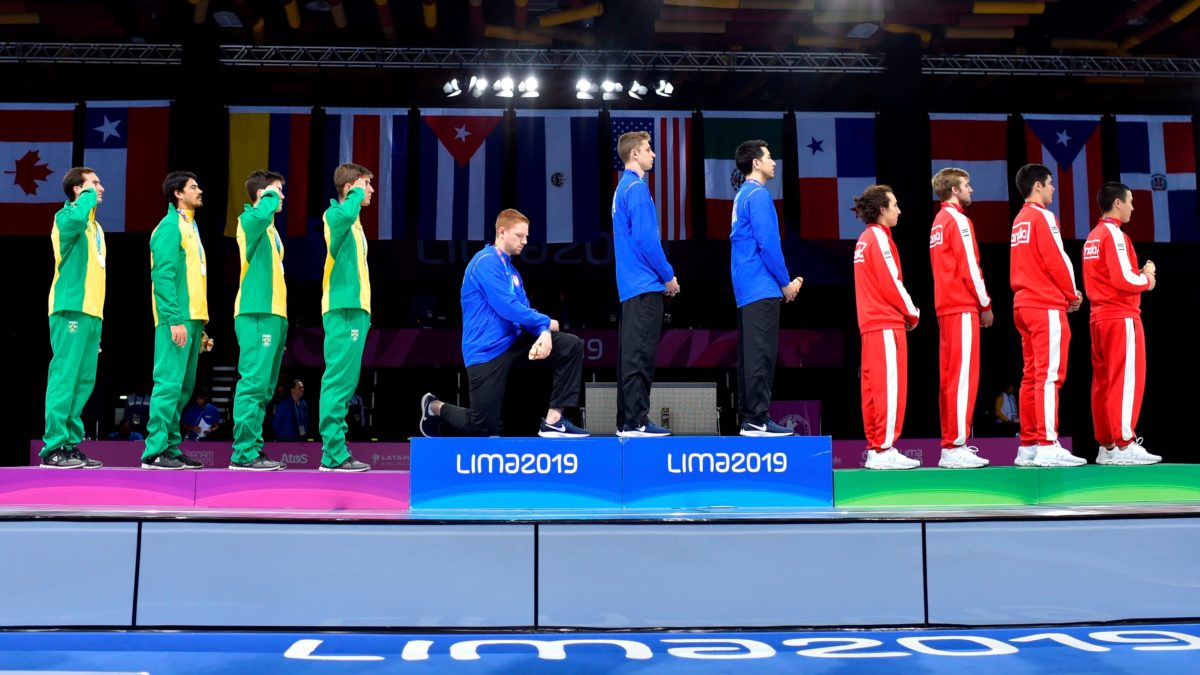 The act of kneeling for the national anthem is not a new phenomenon among athletes. However, many people still consider it disrespectful to the country, the flag, and those who risked their lives to defend it. Recently, at the Pan American Games in Lima, Peru, American gold medalist fencer Race Imboden knelt as the national anthem played in order to protest racism, gun control, mistreatment of immigrants, and President Donald Trump. Fortunately, in this case, Imboden could face disciplinary action in light of an agreement that was in place at the time.

Imboden is not the first athlete to kneel during the anthem. Initially, the practice started with Colin Kaepernick, who refused to stand for the national anthem during a football game. Other NFL players followed suit. Most recently, during the World Cup tournament, Megan Rapinoe, a team captain for the United States women’s soccer team, refused to recite the national anthem (or put her hand on her heart) before each game in protest of the president’s alleged policies. (Rapinoe no longer went on one knee because of a rule implemented by U.S. soccer). In doing so, Rapinoe also repeatedly and publicly disparaged the president. While Kaepernick and Rapinoe faced backlash for their actions, they did not face any real consequences for their conduct. Imboden’s case could be different.

According to U.S. Olympic and Paralympic Committee spokesman Mark Jones, “every athlete competing at the 2019 Pan American Games commits to terms of eligibility, including to refrain from demonstrations that are political in nature.” Here, Imboden clearly violated the terms of his agreement by kneeling during the anthem. In a Tweet, Imboden — in essence — made a case against himself by explaining his conduct:

We must call for change. This week I am honored to represent Team USA at the Pan Am Games, taking home Gold and Bronze. My pride however has been cut short by the multiple shortcomings of the country I hold so dear to my heart. Racism, Gun Control, mistreatment of immigrants, and a president who spreads hate are at the top of a long list. I chose to sacrifie [sic] my moment today at the top of the podium to call attention to issues that I believe need to be addressed. I encourage others to please use your platforms for empowerment and change.

While many could consider Imboden’s conduct offensive and unpatriotic, the reasons behind his conduct could be less relevant if his conduct is deemed to violate the terms of the agreement that he, and every athlete competing in the Pan American Games, agreed to. As
Jones stated, “In these cases, the athletes didn’t adhere to the commitment they made to the organizing committee and the USOPC.” Jones further stated, “We respect their rights to express their viewpoints, but we are disappointed that they chose not to honor their commitment. Our leadership are reviewing what consequences may result.”

By prohibiting such conduct by creating “eligibility requirements,” the Committee has made it much easier to deal with violators. Assuming that a provision of this nature is not deemed to be improper/illegal and/or does not violate a player’s freedom of expression (or viewpoint), violators will face disciplinary action/consequences if, and when, they violate a term of their agreement!

Such provisions will also put players on the same “playing field.” In other words, if a player violates the agreement by way of engaging in prohibited conduct (i.e. a political “demonstration”), the player will be disciplined. Of course, the nature of the discipline and how it is determined will have to be clearly laid out given the different scenarios and violations that could occur.

Many of those who “kneel” claim that they are doing so in solidarity to protest inequality and injustice around the country. While their message is important, they should not use the Games, the field, or the pitch as a platform for their protests. Rather, the players and those who choose to kneel have other options. They can hold a rally at a venue of their choosing that is not on game day. They can lead a peaceful march. They can also use their status to meet with the president and other political leaders to discuss their concerns.

A swift and appropriate punishment for such violations is sorely needed. By kneeling or failing to put their hands on their hearts during the anthem, these athletes are disrespecting the very country that affords them the opportunity to make a very good living and/or excel at their respective sport at the highest level(s). They are also disrespecting the flag and those who have served (and continue to serve) our country in order to protect Americans each and every day.

The agreement between the Games and the participating athletes somewhat levels the playing field.