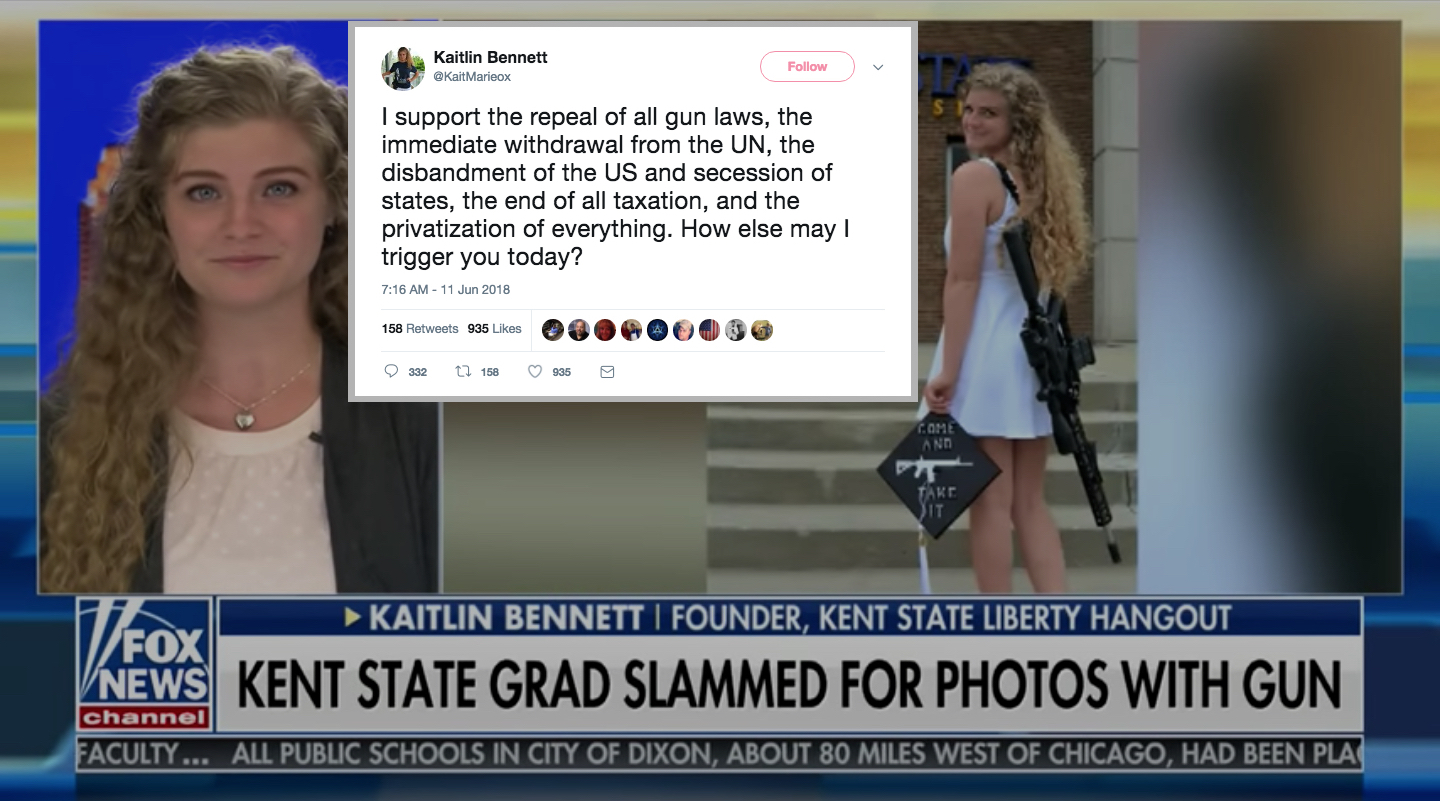 Kaitlin Bennett loves the Second Amendment to the U.S. Constitution. But if a recent tweet is any indication, she doesn’t seem to like the United States of America very much. On Monday, Bennett appeared to out herself as an anti-American secessionist.

In a tweet posted at 7:16 a.m., Bennett noted the somewhat extreme nature of her political worldview. She wrote:

I support the repeal of all gun laws, the immediate withdrawal from the UN, the disbandment of the US and secession of states, the end of all taxation, and the privatization of everything. How else may I trigger you today?

Bennett’s advocacy here is not atypical of her Twitter persona.

Aside from the snarky language employed, the radical theme of repealing all gun laws is all but constant throughout Bennett’s tweets. On June 6 she wrote, “If the left is going to be unapologetic and outspoken on their support for radical gun control, then we should have no shame in supporting the 2nd amendment to its fullest extent and having no apologies. EVERY SINGLE gun law is an infringement and should be repealed.”

If the left is going to be unapologetic and outspoken on their support for radical gun control, then we should have no shame in supporting the 2nd amendment to its fullest extent and having no apologies. EVERY SINGLE gun law is an infringement and should be repealed. #2A

The tweet Bennett sent immediately prior to the pro-secession tweet laid out a manifesto of sorts. Bennett wrote, “Today’s ‘conservative’ leaders have failed us, selling out on our principles to compromise with those that want to trample upon our rights. We need a new brand of conservatism that is unapologetic and uncompromising on principles that are true to liberty.”

On Sunday, Bennett tweeted criticism at Second Amendment supporters who endorse concealed carry permits. She accusatorially noted, “A lot of 2A supporters aren’t willing to admit it, but conceal carry permits are a form of gun control. You shouldn’t need the government’s permission to exercise your right to self-defense. Rights don’t come with permits! #CampusCarryNow.”

So, Bennett’s rhetoric in the pro-secession tweet is of a piece with her prior, repeatedly expressed viewpoints. Law&Crime reached out to Bennett for clarification on the language–and directly asked her if she was serious–but no response was forthcoming at the time of publication.

While Bennett’s anti-U.S. and pro-secession language would not qualify as treason under either the Constitutional or statutory definitions. That doesn’t mean her opinions are likely to be treated as anything other than an expression of anti-American hatred. And, in legal terms, Bennett has described a Constitutional impossibility.

Even the conservative movement’s own foremost legal voice and vessel Antonin Scalia once noted:

I cannot imagine that such a question could ever reach the Supreme Court. To begin with, the answer is clear. If there was any constitutional issue resolved by the Civil War, it is that there is no right to secede.

Aside from expressing wildly implausible legal outcomes, Bennett is mostly known for graduating from Kent State University while posing with an AR-10 in her graduation photos. Her Twitter bio currently identifies her as the “grassroots director” for right wing group Liberty Hangout. Bennett was also the Kent State President of Pro-Trump student group Turning Point USA during the organization’s ill-fated and widely-mocked diaper protest. During this protest, conservative college students decked themselves out in diapers and other infant accoutrements in an effort to mock liberals. After that protest, Bennett angrily resigned.