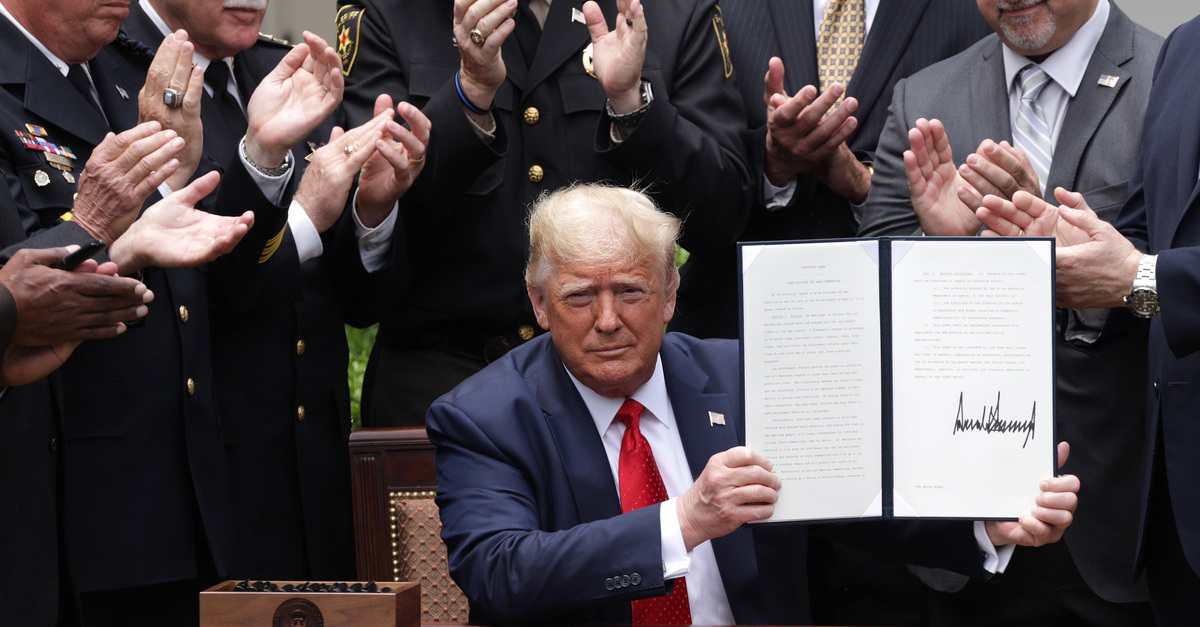 President Donald Trump signed an executive order geared toward police reform on Tuesday that was billed as the 45th president’s answer to weeks of national unrest following the Minneapolis Police Department’s killing of George Floyd in late May.

Based around an incentive structure rather than mandates, anti-policing movement activists and police organizations alike can rest certain: Trump’s order executive does nothing to limit police power.

The order has four major prongs: (1) a certification and credentialing section that aims for best practices and more transparency from police departments; (2) an information sharing section based on the creation of a national excessive force database administered by the U.S. Attorney General’s Office; (3) a mental health, homelessness and addiction section that would train law enforcement officers and pair them with social workers and mental health professionals; and (4) a promised legislative effort that envisions increasing the availability of grant funding to execute those other goals.

Those measures were quickly seen by reform advocates as both “piecemeal” and inadequate.

“Donald Trump and his administration have taken every opportunity to dismantle federal police reform efforts, undercut accountability, and threaten the public with a militarized law enforcement response,” said President and CEO of The Leadership Conference on Civil and Human Rights Vanita Gupta in a statement to Law&Crime. “This executive order is a woeful attempt to shift focus from the dangerous rhetoric and policies he has previously promoted. Piecemeal reform effort will not achieve the transformative change needed to heal our country and usher in a new era of public safety in which all communities thrive.”

Kristen Clarke, president and executive director of the Lawyers’ Committee for Civil Rights Under Law, had a similarly dismissive take.

“President Trump’s executive order is woefully anemic and fails to address critical issues such as racial profiling, qualified immunity for officers and the need for national standards concerning use-of-force,” Clarke said in a statement. “The order sugarcoats the grave national crisis of police violence and fails to acknowledge that racism and systemic discrimination have led to the deaths of unarmed Black people at alarming rates. The order bears the imprint of police unions as reflected by the absence of any procedures for promoting accountability.”

“We have reviewed the language of President Trump’s Executive Order and support its goals and methodology,” Fraternal Order of Police (FOP) President Patrick Yoes said in a statement on their website. “It strikes a great balance between the vital need for public and officer safety, and the equally vital need for lasting, meaningful, and enforceable police reform.”

Such an endorsement by the targets of reform efforts is unlikely to endear the 45th president’s plan to nonprofits who are proposing larger changes. The order is also certain to be a nonstarter for hundreds of thousands of Black Lives Matter protesters who have taken to the streets under the banner and demand of drastically defunding police departments and reallocating their budgets into social services, community programs and novel justice programs.

“The executive order that President Trump signed today takes reform ideas currently under consideration by the House of Representatives and waters them down to make them virtually meaningless,” said the Center for American Progress’s Vice President for Criminal Justice Reform Ed Chung in a statement provided to Law&Crime. “Police departments already have access to local, state, and federal funds to improve their policies and reform their culture, but those incentives have not resulted in meaningful change.”

Even those efforts, however, have been decried by on-the-ground activists and longstanding reform advocates who caution that Democrats simply are not going far enough.

Notably, the imprimatur of police unions is visible on legislative reforms as well. Yoes also said the FOP has reviewed the House’s proposed legislation and “provided feedback.”

Additionally, the law enforcement labor organization has “had substantial input” on GOP legislation currently being drafted by Sen. Tim Scott (R-S.C.) and they “expect this engagement to continue.”

Scott’s bill, slated for a Wednesday release, appears to function more or less the same as Trump’s executive order–basing a similar suite of reforms on access to grant funding instead of actual prohibitions. The House Democratic bill also proposes additional police funding.

And, while much was made of Trump’s proposal to end chokeholds unless an officer’s life is threatened–even that section of his executive order is absent any genuine limits on the often-deadly practice due to the lack of an enforcement mechanism. Instead, much like the House bill, the order envisions economic incentives to force police departments into eliminating the practice.

“While the order takes some steps forward, it is an inadequate response to a nation demanding sweeping, bold action,” Gupta said. “If Trump is truly committed to ending police violence, he must support real, comprehensive accountability measures that would fundamentally change policing culture and invest in Black communities and others hardest hit by overcriminalization.”