‘He Might Be a Little Scratched, But He’ll Survive’: Police Body Cam Video of George Floyd’s Arrest Revealed 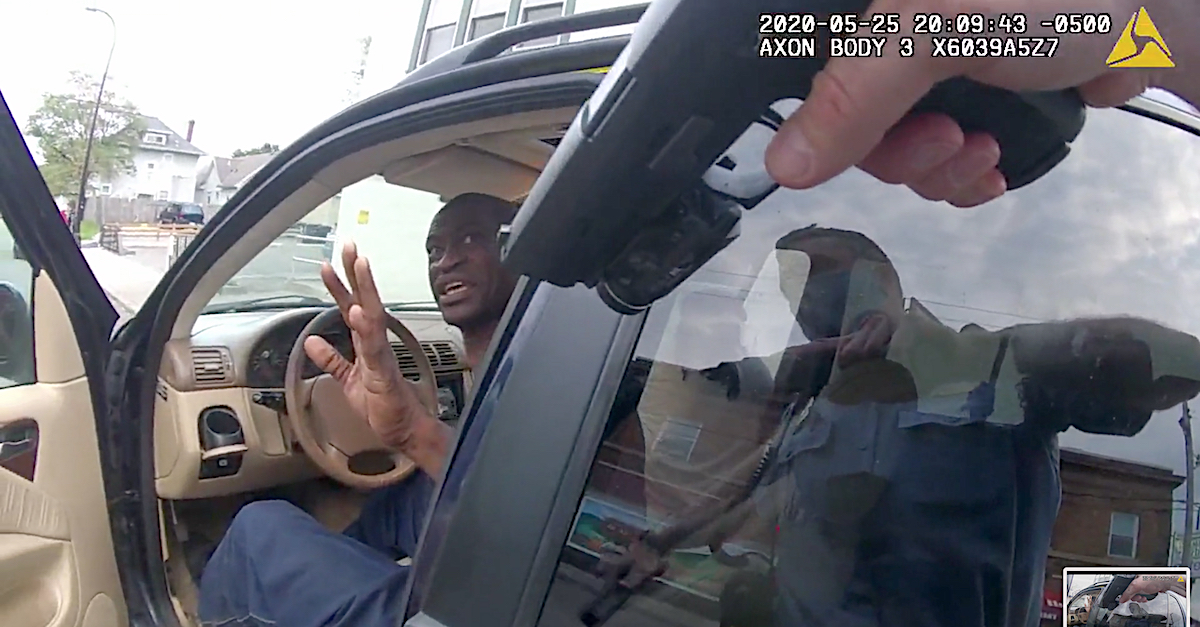 The Minnesota judge overseeing the trials of four former police officers accused of murdering or playing a role in the murder of George Floyd has authorized the release of some of the police body camera video of the events which led to nationwide protests.

You can watch the videos in the players below. WARNING: the videos are graphic.

The first video is from a body camera worn by former Minneapolis officer Thomas Lane. It shows Lane approaching Floyd outside the Cup Foods store where Floyd was suspected of passing fake currency. Lane drew his weapon as Floyd sat behind the wheel of his SUV; when Floyd did not immediately respond to requests to make both his hands visible, a profanity-laden series of shouts began. Floyd said that he had been shot before; Lane continued to order Floyd to cooperate as Floyd begged not to be shot. Floyd began to sob; Lane attempted to remove Floyd from the vehicle. Other officers assisted and told Floyd to “stop resisting” as he was cuffed.

Lane left the driver’s side of Floyd’s vehicle to speak to two other people, including Shawanda Hill, Floyd’s girlfriend, and another occupant who was inside Floyd’s vehicle when officers approached it. “Why’s he getting all squirrely and not showing us his hands and he’s being all weird like that?” Lane asked. One of the two responded that Floyd had been shot before. Lane asked if Floyd was “drunk” or “on something.”

Lane then walked to the side of a nearby building where then-follow officer J. Alexander Kueng had detained Floyd.  The officers then walked across the street to a waiting police SUV. Floyd was told to stay on his feet and face the vehicle. Additional officers began to arrive.

Floyd yelled that he was “not guilty” during an agitated back-and-forth with the officers. Floyd then said he was “claustrophobic.”

Lane said Floyd was “still going inside the car.”

“I am claustrophobic for real, officer,” Floyd said while asking Lane to stay with him. “I wouldn’t do nothing to y’all — nothing,” Floyd said.  Shortly thereafter, Lane completed a pat down and said Floyd was “good.”

Floyd refused to get into the vehicle, saying, “I’m not that kind of guy.”

He continued to say he was claustrophobic and “scared as fuck.” He then complained about his breathing — before he was on the ground.

Floyd said he would prefer to get on the ground rather than into the police SUV.

“I’ll get on the ground — anything,” Floyd said.

Officers told him to “take a seat.”

Floyd and the officers struggled. He then said he could not breathe — and continued to repeat the complaint as four officers restrained him, attempted to drag him into the police SUV, and then put him on the ground.

The frantic video continues as officers struggled to hold Floyd to the ground.

Floyd tried calling out to his mother and to his family as he was pressed to the ground.

Floyd continued to say he could not breathe.

Later, one of the officers said Floyd had to be “on something.” Floyd continued to protest. One said there was a “weed pipe” on Floyd’s person; they then started to debate whether Floyd was also on PCP.

Floyd asked for water at one point.

Lane continued to hold Floyd’s legs feet. One voice asked if Floyd should be rolled to his side because of excited delirium.

“I think he’s passing out,” one officer said.

The voices of those watching from the sidewalk could be heard asking the officers if Floyd was okay.

“He might be a little scratched but he’ll survive,” one said in response to a question about whether Floyd was alright. “He’s breathing,” one then said.

Lane appeared to have relinquished the force he was using to hold Floyd to the ground while other officers, including Derek Chauvin, continued to apply pressure.

Lane then rode in the ambulance with Floyd. He told a brief version of the account to the paramedics. Lane said Floyd was trying to kick his way out of the police SUV. At one point, Lane checked for Floyd’s pulse in the back of the ambulance.

Lane was asked to help perform CPR on Floyd on the way to the hospital.

At one point in the ambulance, a voice said Floyd “had to be detained with physical force.”

Paramedics then struggled to attach a mechanical device to perform CPR on Floyd.

Lane exited the ambulance in a residential neighborhood and entered the cab of a fire truck. He then recounted some of the details to someone inside the fire truck. Kueng’s video (below) revealed that the ambulance took off for that area because a crowd was forming.

Lane and another individual talked about Floyd’s prognosis inside the fire truck as Floyd held the handcuffs which had been used to restrain Floyd.

Questions turned to whether Floyd was taking drugs. “He seemed very agitated and paranoid,” Lane said.

Lane checked to see if the ambulance crew wanted him to remain with them; they said they didn’t need his help. The CPR device on Floyd was no longer performing chest compressions. Lane got back into the fire truck and was told he would be able to get a ride back to the food store where the incident started.

The second video is from a body camera worn by J. Alexander Kueng.

Kueng’s video shows a store employee pointing out the vehicle which contained a suspect who attempted to pass a fake $20. Kueng walked with Lane to Floyd’s vehicle, spoke to a man in the passenger, seat, then went to the driver’s side when he noticed Lane was struggling with Floyd.

Kueng questioned Floyd while Floyd was seated on a sidewalk and leaning against a nearby building.

Kueng asked Floyd, “Man, do you know why we’re here?”

Kueng said, “We’re here because it sounds like you gave a fake bill to the individuals in there.”

“You understand that?” Kueng asked.

“Do you know why we pulled you out of the car?” Kueng asked. “Because you was not listening to anything we told you.”

“Right, but I didn’t know what was going on,” Floyd said.

“You listen to us and we will tell you what’s going on,” Kueng answered.  “When you’re moving around like that, that makes us think way more’s going on then we need to know.”

Later, as officers tried to walk Floyd to a squad car, one officer said he was “nervous” because Floyd kept reaching for his side.

Officers noted Floyd had “foam” coming from his mouth while asking if he was “on something.”

Floyd said he wasn’t on anything and that he was scared. (Autopsy reports later indicated the presence of drugs.)

The altercation continues in the videos above.

After Floyd’s unconscious body is put in the ambulance, Kueng returned to the card Floyd was in. While Kueng talked to one of the occupants of Floyd’s vehicle, Floyd’s girlfriend talked to a bystander who said the police had their feet on Floyd.

Kueng returned to the store where Floyd was accused of passing the fake currency.

During a conversation inside the store, Kueng said the ambulance left not for the hospital but for another area. A crowd was forming near the scene of Floyd’s arrest.

After leaving the store, Kueng approached Derek Chauvin, who was near Floyd’s vehicle. There, Kueng bagged the $20 bill Floyd allegedly used to purchase cigarettes; Chauvin asked if Floyd obtained “goods and services” with it. A group of officers then began to discuss what happened with Floyd.

The recording shuts off when the officers agreed their cameras should be shut off.