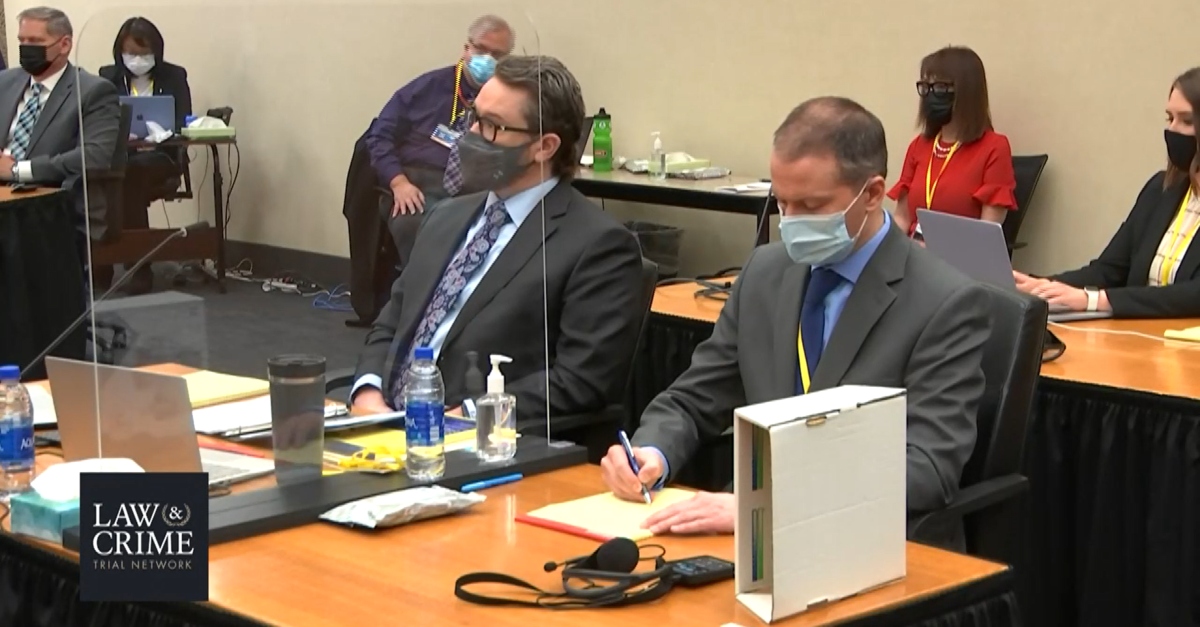 Both sides in the murder trial of fired Minneapolis police officer Derek Chauvin made their opening statements on Monday. Prosecutor Jerry Blackwell told jurors the defendant betrayed his badge by using excessive, fatal force on victim George Floyd, 46, on May 25, 2020. He primed the jury to dismiss other possible causes of death. Defense lawyer Eric Nelson took the opposite approach, insisting Chauvin followed his training that day. Health problems and drug use resulted in Floyd’s passing, he said.

The state showed jurors the tragic video in which the defendant kneeled on Floyd’s neck during an arrest over a $20 counterfeit bill at the Cup Foods corner store. Blackwell construed this as absolutely unreasonable, with Chauvin “grinding and crushing” Floyd until the very life was squeezed out of him. The prosecution noted there was road rash on the victim’s shoulder.

Floyd had not threatened anyone. He was unarmed, and handcuffed. The prosecutor used the word “defenseless.” Floyd’s breathing became shallower and shallower as time went by, but Chauvin’s actions continued on even after the victim had no pulse, and even after the ambulance arrived.

Chauvin did not let up even as a paramedic checked Floyd’s pulse, Blackwell said. He only stepped away when Floyd’s limp body was lifted onto the gurney.

Jurors will hear testimony that use of force has to be evaluated from moment to moment, and that the force used used in this case should have ended when Floyd was put on the ground. Blackwell noted that bystanders realized something was going wrong and demanded that Chauvin get off of Floyd’s neck.

This is Donald Williams. He has a background in security and mixed martial arts and continually tells them #GeorgeFloyd can’t breathe and says to Chauvin “you’re enjoying this… you’re a bum bro. You’re a mentally ill dumb, bro. Check his pulse.” @LawCrimeNetwork https://t.co/HILvVyYOpB

One of the witnesses, a firefighter, had wanted to check Floyd’s pulse before the ambulance arrived. Chauvin stopped her, the state said. Another witness, a 911 dispatcher, witnessed the arrest, and actually reported it because she found it so disturbing.

Blackwell said there will be testimony that Floyd should not have been put in the prone position because he was already handcuffed. There was the potential to obstruct the airways.

Nelson said those upset bystanders distracted officers. It was not just the people on the nearby sidewalk. Officers were also aware of others on the other side of police, and aware of cars stopping. The growing crowd, one member of which called Chauvin a “fucking bum,” caused cops to divert their attention from Floyd to the “threat” in front of them.

Nelson worked to present Chauvin’s actions as reasonable under the circumstances. Officers struggled to get Floyd out of his Mercedes-Benz. When confronted by police, he put drugs in his mouth conceal the substances from cops.

Surveillance footage showed the squad car rocking back and forth as police attempted to put the victim inside. This was not an easy struggle.

Also, Floyd was a physically bigger man than Chauvin. The initial 911 call reported him at being 6 to 6-and-a-half feet tall.

Nelson: Another clerk called 911 and described #GeorgeFLoyd as drunk. He’s not acting right. Officers Lane and Kueng arrived in Squad 320 just after 8 p.m. and approached the Mercedes-Benz @LawCrimeNetwork #DerekChauvin

In restraining Floyd, the defendant did what he was trained to do, according to the defense.

Use of force experts and a police conduct witness will testify that the victim’s size was no excuse for excessive force, Blackwell said. The prosecutor said a claustrophobic Floyd was trying to count himself into the squad car, but was afraid and said he could not breathe.

Both sides acknowledged that Floyd had health problems, as well as drugs in his system. Blackwell said the man would have lived were it not for Chauvin’s actions that day, however. He said that the victim, who had the synthetic opioid fentanyl in his system, lived with an opioid addiction for years, but those suffering from opioid overdoses fall asleep. They are not begging for their life. Floyd was struggling. He was not passing out. Instead, the victim’s behavior matched the pattern of someone dying from an oxygen deficiency.

There was no clotting in the man’s heart, and no evidence of heart injury. It was so unremarkable that the medical examiner did not photograph it, Blackwell said.

Nelson, on the other hand, said that police found pills containing meth, and traces of fentanyl, with Floyd’s DNA and saliva. A doctor found none of the tell-tale signs of asphyxiation. For example, there was no bruising, no evidence of airflow restriction, and no mechanical asphyxiation.