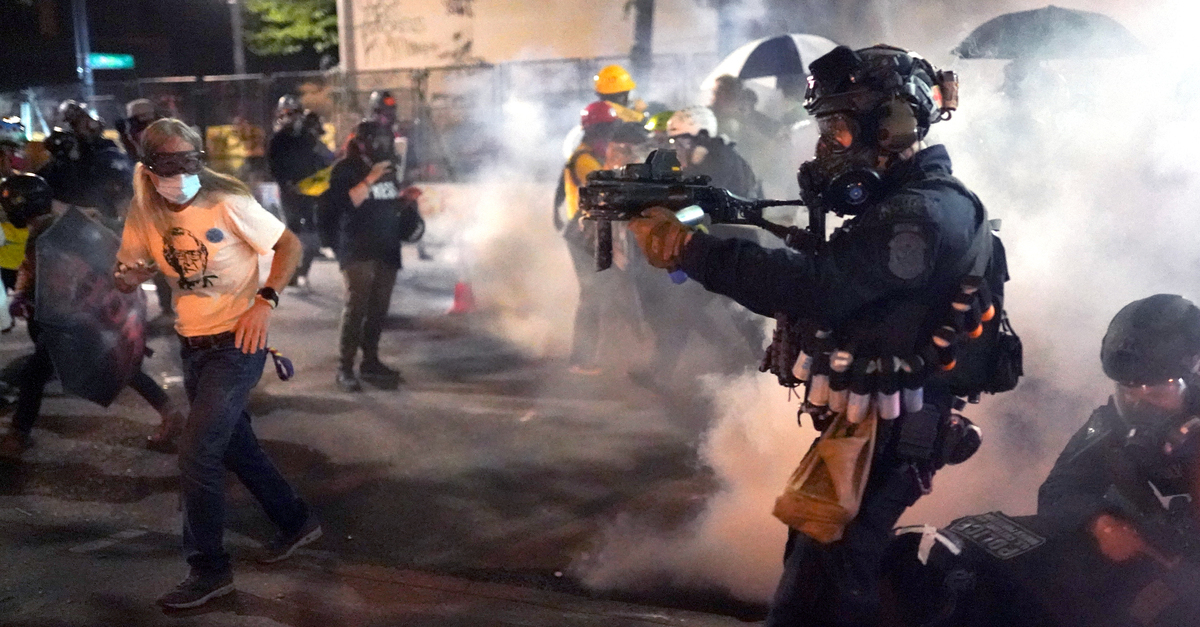 The American Civil Liberties Union (ACLU) of Oregon obtained an injunction on Thursday against the City of Portland and the Portland Police Bureau (PPB) which prohibits those government agencies from collecting or maintaining protest footage.

“The gist is that the City and PPB are enjoined from collecting or maintaining recordings of demonstrators not engaged in criminal activity,” noted attorney Alan Kessler, who worked on the case.

Filed on behalf of an unnamed Protester #1, Kessler described the temporary restraining order (TRO) as a legal victory “striking” a “blow against PPB surveillance.”

The City and its employees, agents, and all others acting in concert with it or on its behalf, including but not limited to the Portland Police Bureau, are temporarily enjoined from collecting or maintaining audio or video of protestors demonstrating in public spaces, except where the video or audio relates to an investigation of criminal activities and there exist reasonable grounds to suspect the subjects of the videos are involved in criminal conduct.

The final phrase provides a potential caveat for law enforcement and city officials to continue recording protesters and retaining copies of such recordings. While critics of the PPB and the city government are likely to view that caveat as providing ample pretext for largely evading the terms of the order, the order itself originally purports to limit the impact of the “criminal conduct” caveat.

That language reads: “For purposes of this Order, ‘criminal conduct’ does not include failure to disperse following the issuance of an order by PPB or another law enforcement agency to do so or other forms of passive resistance.”

Notably, however, the phrase appears to be stricken through on the actual order. But Kessler said activists shouldn’t sweat that apparent deletion.

Noting that failure to disperse and passive resistance are not crimes in tolerant Oregon, the attorney said he “wouldn’t think a judge is going to see it that way.”

“[U]nlawful assembly isn’t actually a crime in Oregon,” Kessler explained in response to a question about the common police tactic of quickly declaring a protest illegal and then attempting to arrest participants who don’t leave. “[T]hey can try it, but they’ll probably get nailed.”

The temporary restraining order is in effect until Monday, August 10, 2020. A hearing for a preliminary injunction is currently scheduled for August 7.

within the 10 days (or longer agreed period) typically then you go to a show cause hearing, which results in removing the TRO or putting in a “preliminary injunction” — the same thing as a TRO but for a longer term (i.e. while the lawsuit is going on)

The underlying lawsuit was filed on July 29 in Multnomah Circuit Court. The complaint seeks to end the PPB’s practice of live-streaming protests in downtown Portland.

In a statement, the Beaver State’s arm of the ACLU said the police recording of protesters “leaves Oregonians engaging in protected First Amendment activities subject to surveillance by federal law enforcement. The PPB livestream often zooms in on individual’s faces which makes protesters vulnerable to face surveillance technology.”

“The Portland Police Bureau’s livestream at protests is state surveillance and violates an Oregon law designed to safeguard against police abuses,” the group added.

The law in question reads:

No law enforcement agency, as defined in ORS 181A.010 (Definitions for ORS 181A.010 to 181A.350), may collect or maintain information about the political, religious or social views, associations or activities of any individual, group, association, organization, corporation, business or partnership unless such information directly relates to an investigation of criminal activities, and there are reasonable grounds to suspect the subject of the information is or may be involved in criminal conduct.

“We appreciate Judge [Stephen] Bushong’s order,” Jann Carson, interim executive director of the ACLU of Oregon said in a statement. “Today’s decision is an important step towards ensuring all people can exercise their rights to protest and assembly without fear of government surveillance.”

Read the full TRO below:

TRO – ACLU v. City of Portland by Law&Crime on Scribd

Editor’s note: this article has been amended post-publication to include a quote and a link.