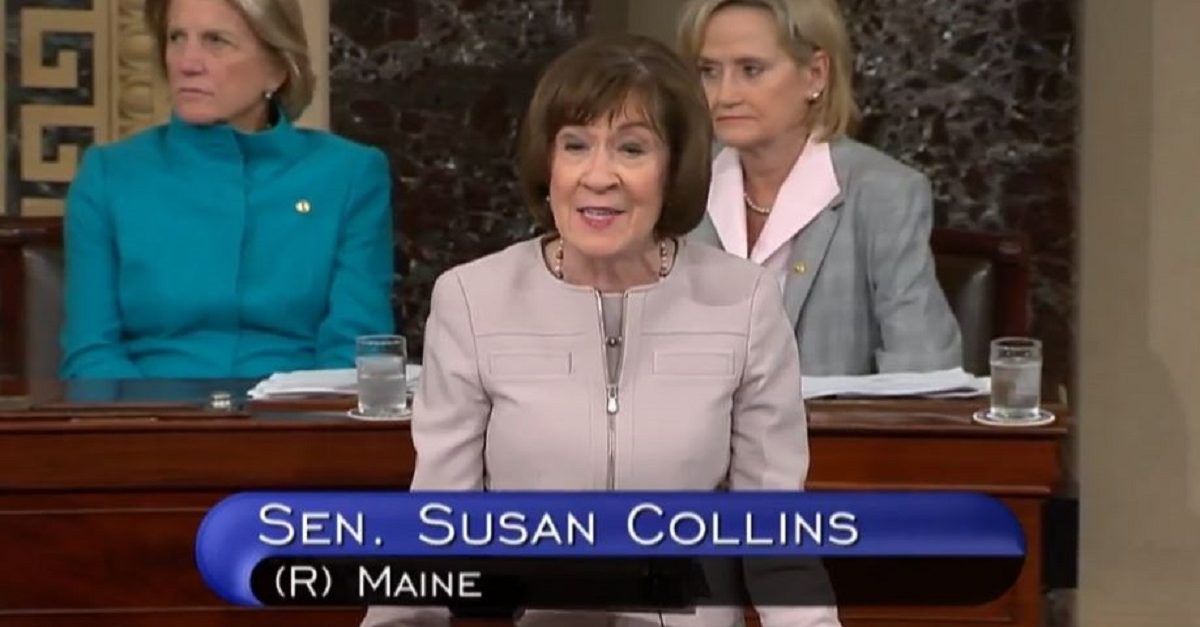 Sen. Susan Collins (R-Maine) had been one of several moderates in the Senate whose intention when it comes to voting on Supreme Court nominee Brett Kavanaugh‘s confirmation was a mystery. Friday afternoon, Collins announced that when the Senate votes on Kavanaugh on Saturday, she will vote yes.

Collins preceded her announcement by calling out left-wing politicians and interest groups for making their decision to oppose President Donald Trump‘s nominee before Kavanaugh was even named. She said that these decisions are not about going along party lines.

“My duty as a Senator is to focus on the nominee’s qualifications as long as that nominee’s philosophy is within the mainstream of judicial thought,” Collins said, noting that she voted for conservative Justices Alito, Robert, and Gorsuch, as well as liberal Justices Kagan and Sotomayor.

The public had their collective eye on Collins since early on in Kavanaugh’s confirmation process. The moderate Republican expressed concern over the future of abortion rights in the United States, and whether or not Kavanaugh would vote to overturn Roe v. Wade if given the opportunity. During his confirmation hearing, Kavanaugh discussed the significance he gives not just to Roe, but to Planned Parenthood v. Casey, which affirmed it. After Collins met with Kavanaugh and discussed this issue, she said she did not believe Kavanaugh would overturn Roe.

Collins said Friday that according to Kavanaugh, “precedent isn’t a goal or an aspiration, it is a constitutional tenet,” which leads her to believe that Roe v. Wade is safe.

Adding to her claim that Kavanaugh is not a far-right jurist but more of a centrist than critics claim, Collins noted that Kavanaugh has voted with D.C. Circuit colleague Judge Merrick Garland 93 percent of the time.

Collins referenced concerns that Kavanaugh would eliminate protections under the Affordable Care Act, but said she did not share that concern that Kavanaugh would do such a thing. She also claimed that critics were wrong in their characterization of Kavanaugh’s approach to government facilitation of access to birth control.

Sen. Lisa Murkowski (R-Alaska) also said she would not support Kavanaugh if she believed he would overturn Roe, but also appeared to be leaning towards supporting him after meeting. That has apparently changed in recent weeks, after Kavanaugh faced sexual assault allegations from Dr. Christine Blasey Ford and Deborah Ramirez. On Friday, Murkowski voted no in a cloture vote to end debate on Kavanaugh’s nomination. She has since stated that she will vote against him on Saturday.

Collins addressed the allegations against Kavanaugh by saying that while she recognizes that this is not a criminal trial, presumption of innocence is still relevant in light of the nominee’s otherwise positive record. She said this is the case even despite the serious nature of the allegations.

“It is when passions are most inflamed that fairness is most in jeopardy,” she said.

Collins did say that she believed that Ford had been sexually assaulted, just not necessarily at the time, place, or at the hands of the person she claimed.

“Nevertheless,” she said, “the four witnesses she named could not corroborate the events,” she said.

“We also learned some fact that raised some more question,” Collins said, such as the fact that Ford didn’t seem to recall who gave her a ride home on the night in question, and that no one has come forward to say they were the one who drove her home.

The Senator from Maine did come to Ford’s defense when it came to the matter of her allegations and identity becoming public knowledge against her wishes. Collins addressed the unknown leaker, calling their act “unconscionable.” She said she does not believe that Sen. Dianne Feinstein (D-California), who referred the matter to the FBI, was the one responsible for the leak.