LAPD Officer 'Did Not Identify a Crime' Against Amber Heard

‘We Did Not Identify a Crime’: Officer Who Responded to Alleged Domestic Incident Testifies Amber Heard Reported No Abuse and Did Not Appear Injured 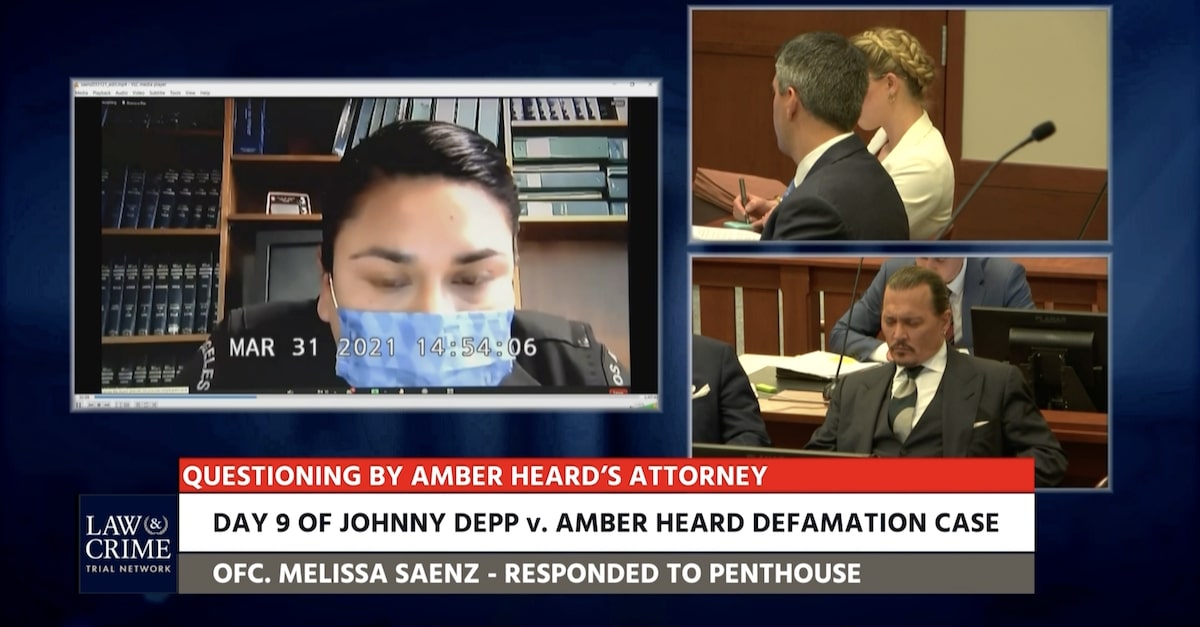 An officer who responded to an alleged domestic violence incident at Amber Heard’s penthouse half a decade ago testified that she determined that there had been no crime. Heard, who was still Johnny Depp’s wife at the time, did not claim to have been assaulted and did not appear injured, the officer said.

On May 21, 2016, Los Angeles Police Officer Melissa Saenz responded to Heard’s penthouse to find the Aquaman actress crying. Saenz said that she noticed that Heard face appeared to be flushed red with emotion, but she did not notice any injuries. Heard did not claim that she had been assaulted, testified Saenz, a 12-year veteran of the LAPD.

“We met with a victim,” Saenz said in a video deposition. “We checked the location. The husband wasn’t there, and that the victim advised us that she just had an argument. And that she wasn’t going to give us any further information. And because we didn’t identify a crime, we issued her a business card. Let her know that she could reach out to us later if she changed her mind and wanted to cooperate.”

Later that month, Heard filed a request for a restraining order against Depp, accusing him of throwing a phone at her face. She alluded to those allegations in a 2018 Washington Post editorial describing herself as a survivor of domestic violence and sexual abuse. In March 2019, Depp filed a $50 million defamation lawsuit over that editorial, which did not explicitly name him but alluded to her previous allegations. Heard later countersued over Depp describing her claims as a “hoax.”

Tuesday’s trial proceedings in that case ended with testimony from Saenz, who repeatedly testified that she would have filed a report on the alleged incident if she believed a crime may have been committed. Saenz said that she did not because she did not see anything to make her suspect that domestic violence had occurred. The Los Angeles Police Department did not mandate that officers activate body-worn cameras during such incidents until later, she said.

During her questioning, Heard’s attorney questioned the thoroughness of Saenz’s police work, which was previously criticized in a ruling by a U.K. court.

“It is notable that the officers took no contemporaneous notes,” wrote a judge in that case, who found that The Sun newspaper did not defame Depp by calling him a “wife-beater.” “While it is not for me to criticise the methods of another police force, the absence of contemporaneous notes means that their evidence does not carry the same weight as it would otherwise.”

The U.K. ruling also indicates that the Los Angeles police “significantly over-estimated the length of time that they were in the apartments.”

“Officer Saenz said it was 30-60 minutes,” the ruling states. “I have noted above the times that they were captured on the CCTV in the lift going up and then going down from the apartment. While there is no evidence as to the accuracy of the timer on CCTV, that would not affect the interval between those two which was 15 minutes.”

Depp insists that he is the victim of domestic abuse, claiming that Heard fabricated her allegations once it became clear he wanted to divorce her. Earlier on Tuesday, a forensic psychologist called by Depp’s legal team testified that Heard had borderline personality disorder and histrionic personality disorder. That psychologist, Shannon Curry, noted that former disorder is associated with an intense fear of abandonment, and she said that her testing indicated that Heard did not have post-traumatic stress disorder, as she has claimed.