Amber Heard: Johnny Depp 'Kicked Me in the Back' on Airplane

‘He Just Kicked Me in the Back’: Amber Heard Testifies That Johnny Depp Assaulted Her on Airplane in Front of Witnesses 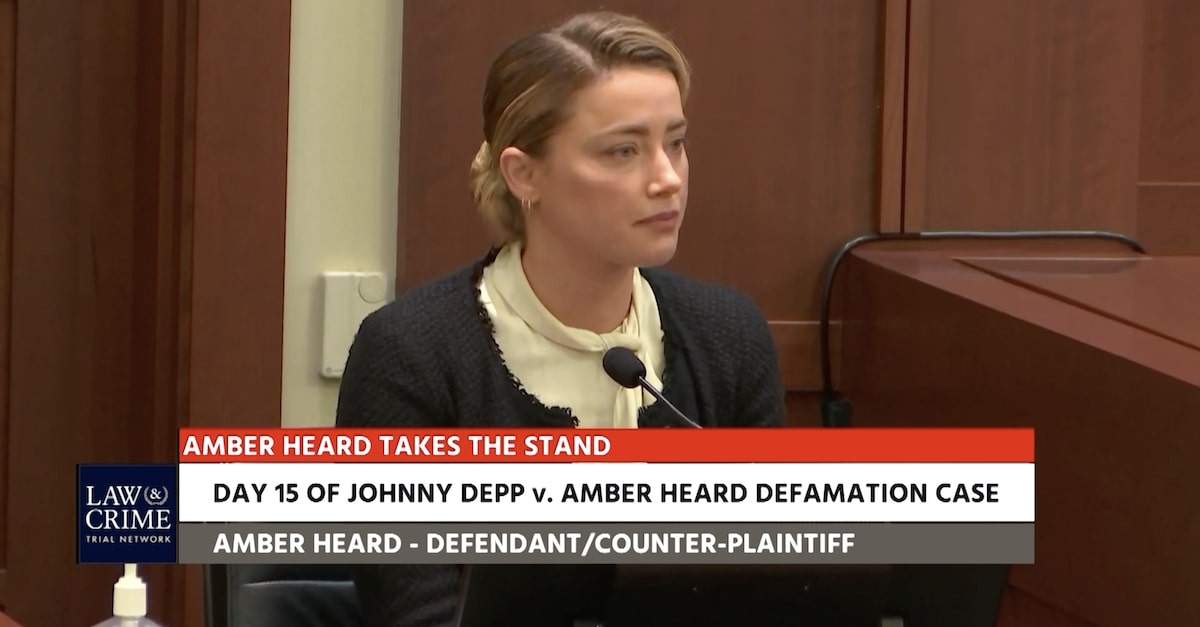 Amber Heard takes the stand for the second day of her testimony against Johnny Depp.

Eight years ago on a flight from Boston to Los Angeles, actor Johnny Depp flew into a jealous rage on an airplane about Amber Heard’s relationship with James Franco, berated her and then assaulted her in front of witnesses, Heard testified on Thursday.

As Heard tells it, the alleged incident marked the first time that Depp assaulted her in front of other people.

When she took the cross-country flight on May 2014, Heard had been shooting The Adderal Diaries with Franco. Heard notably described Depp throughout her testimony as a man “twice my age.” He is now 58, and she is 35. Franco, who is currently 44 years old, is considerably younger than Depp, who allegedly suspected that Heard was having an affair with him.

Heard claimed that Depp threw ice cubes and utensils at her, calling her a “go-getter,” a “slut,” and an “embarrassment.” She said that she moved seats multiple times to avoid him, to no avail.

“Johnny came to me each time, not the other way around,” Heard testified. “He sits down in front of me at one point. And because I’m not answering him, I was looking out of the window. And he slaps my face. And his friend is in our proximity. And I didn’t hurt me. It didn’t hurt my face. It just felt embarrassing.”

Now in her second day of testimony, Heard is defending herself against Depp’s allegations that she defamed him through a 2018 Washington Post editorial describing herself as a victim of domestic violence. She is also pursuing her own counterclaims against Depp for his legal team’s characterizations of those claims as a “hoax.”

The violence, Heard said, did not end with the slap.

“I get up slowly again, and I just resolved to just sit the rest of the time at the front of the plane,” Heard testified. “As I get up, he kind of kicks the swivel chair into my hip kind of just hits me. And I look at him. And he asked me: ‘What are you gonna do about it?'”

Heard said that she stared into Depp’s eyes in an attempt to “penetrate the monster,” her name for the Pirates of the Caribbean star’s alcohol and drug use. It is undisputed that Depp also used the word “monster” to describe his struggles with substances—including in a message to musician Elton John—but Depp testified weeks ago that it was language he internalized to placate Heard. She said her eye contact did not work.

“He just kicked me in the back,” Heard said, adding that she next felt herself on the floor.

She says she asked herself what happened and felt embarrassed by the lack of response from the other passengers.

“Nobody said anything,” she said. “Nobody did anything.”

Throughout Heard’s testimony, the Aquaman actress ran the gamut of intense emotion. She radiated joy at her memories of Depp’s marriage proposal, saying: “I felt like the luckiest woman in the world.” She wept time and again when discussing multiple alleged incidents of domestic violence.

A British judge assessed 14 alleged incidents, finding 12 of them—including the one on the airplane—proven to the civil standard. The case came before a U.K. court after Depp sued The Sun for calling him a “wife beater,” a claim the judge found “substantially true.” In that case, the judge found that the alleged plane incident was corroborated by contemporaneous text messages.

Depp hopes that a Virginia jury will find differently. Heard’s testimony is ongoing.