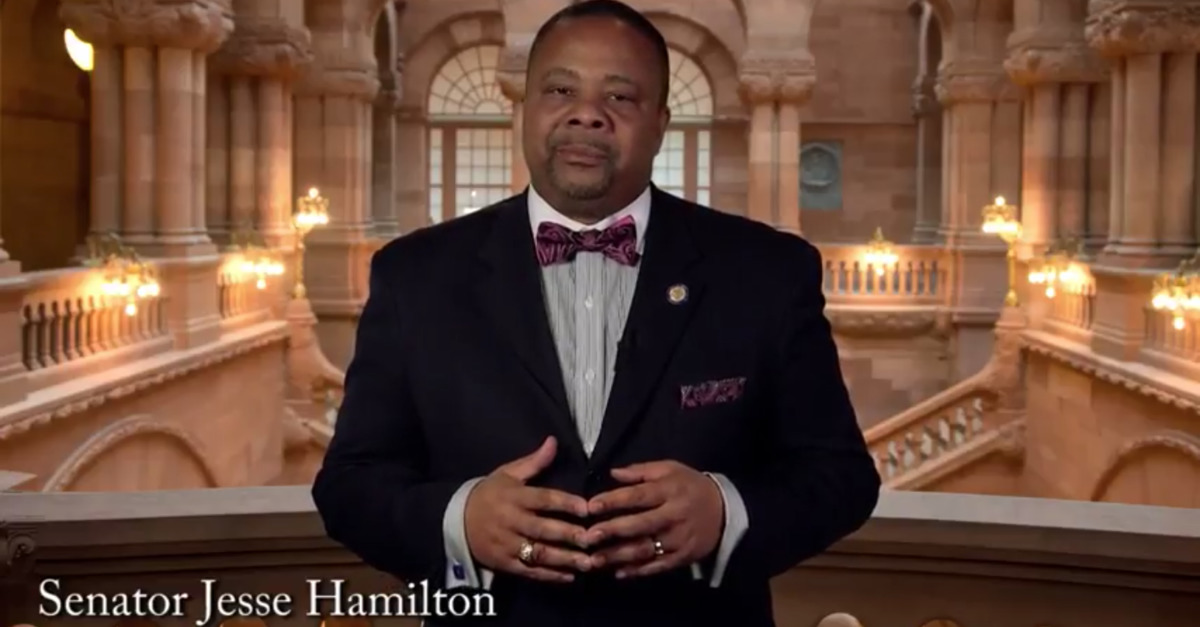 New York State senator Jesse Hamilton, a Democrat, is under fire after be accused of making anti-transgender comments to a constituent while campaigning for re-election in South Brooklyn on Tuesday morning. His staff says he was misinterpreted.

According to a post by Alejandra Caraballo in the closed Facebook group “Prospect Lefferts Gardens and Brooklyn Neighbors,” Hamilton was pressed about his support for the LGBTQ community. In response, Hamilton allegedly said, “I’m not for that third gender shit.”

Caraballo described how the situation unfolded. In her post, she wrote:

I ran into state senator Jesse Hamilton who was campaigning this morning in front of the Winthrop 2/5 stop. I asked him about GENDA (gender expression non discrimination act) and he tried to say he’s pro-LGBTQ and then literally says to me, “I’m not for that 3rd gender shit.” That just confirmed my vote for Zellnor Myrie.

In later comments, Caraballo was asked whether those were Hamilton’s actual words. She said, “Yes, those were his actual words. He tried attacking Zellnor as not supportive of the LGBTQ community and then casually dropped that line.”

Users in the Facebook group then tagged Raul Rothblatt, Hamilton’s director for community affairs, and asked him to address the transphobic comments. In response, Rothblatt wrote:

Senator Hamilton has been the bravest supporter of LGBTQ+ rights in the New York Senate. Two years ago, he was the first elected official to march with a gay pride group on the Labor Day Parade. To say he is homophobic is not credible. I have heard him in private and in public speaking out against homophobia. Full disclosure: I also was at the same subway station this morning with Jesse.

The group’s users continued to push Rothblatt for an explanation of the morning’s comments–many noting that there is a difference between homophobia and transphobia. Eventually, Rothblatt responded, “I just spoke to Jesse, and he reiterated his statement again which was that he opposes conversation therapy. That was his statement this morning.”

IDC members aren’t accustomed to actually campaigning. When they do, they say weird, gross, transphobic stuff. Another reason to vote out Jesse Hamilton and support Stonewall Democrats-endorsed @zellnor4ny pic.twitter.com/voczHVMeS3

Hamilton is technically a member of the Democratic Party. Somewhat controversially, however, Hamilton does not caucus with most other New York State senate Democrats. Rather, Hamilton and a small group of conservative state senators in New York are part of the so-called “Independent Democratic Conference” which allows the New York State GOP control over the Empire State’s smaller legislative chamber.

I’m comfortable enough in my masculinity that I AM all for securing full civil rights for “that 3rd gender shit,” as phony Democrat Jesse Hamilton calls it. I’d encourage any Democrat between Brownsville and Prospect Park to vote for @zellnor4ny Thursday. https://t.co/PuX1E41mLg

i feel so betrayed by jesse hamilton, who was supposed to fight for my rights and those of my friends. it’s still legal in NY to fire someone based on gender expression, because HE BLOCKED GENDA. and his “third gender shit” comments are completely destructive and inappropriate