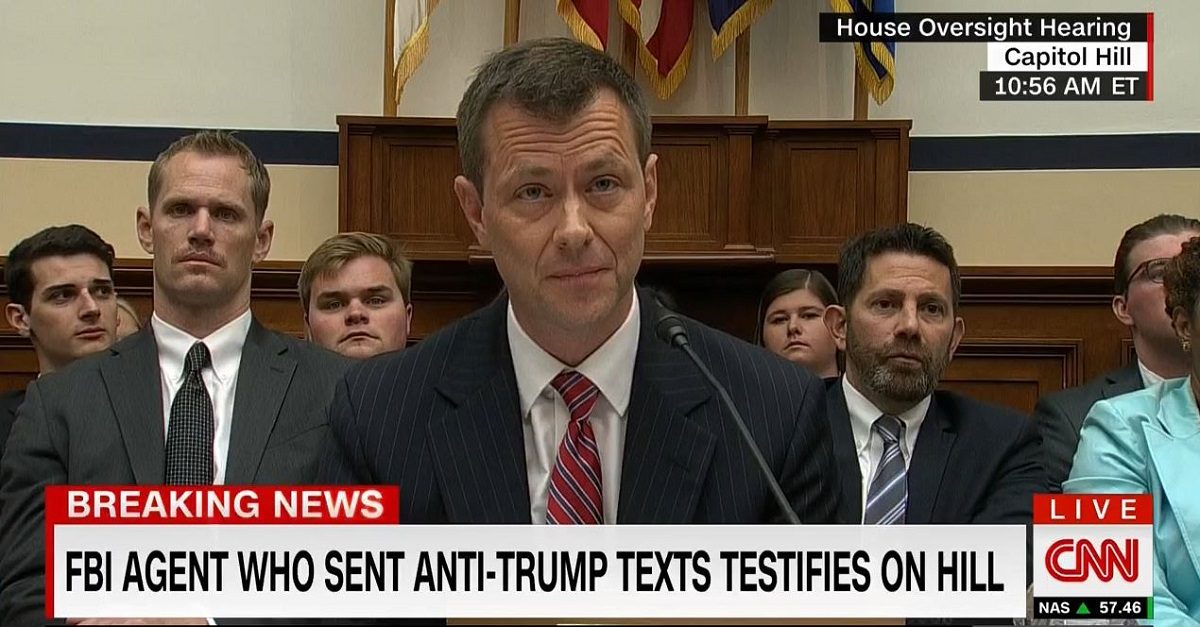 At Thursday’s House Judiciary Committee hearing, Chairman Bob Goodlatte (R-Va.) brought up the possibility of citing FBI Agent Peter Strzok for criminal contempt after he refused to answer questions regarding the investigation of possible Trump campaign ties to Russian efforts to interfere with the 2016 election.

Over and over, Strzok stated that FBI counsel instructed him not to answer questions having to do with an ongoing investigation. Goodlatte did not find this to be a legal basis for refusing to answer certain questions that were general in nature and had to do with the state of the investigation in the days after it began. As a result, Strzok could be held in contempt of Congress.

So what is that?

Every person who having been summoned as a witness by the authority of either House of Congress to give testimony … who, having appeared, refuses to answer any question pertinent to the question under inquiry, shall be deemed guilty of a misdemeanor, punishable by a fine of not more than $1,000 nor less than $100 and imprisonment in a common jail for not less than one month nor more than twelve months.

In order to hit Strzok with contempt, the Committee members first have to vote on whether or not to go that route. If the majority votes to hold Strzok in contempt, the full House of Representatives would then have to vote on a resolution for this. If they pass a resolution, they would then have two options to pick from in deciding how to move forward.

First, the House could instruct its sergeant-at-arms to arrest Strzok and bring him before the House presiding officer (usually the Speaker of the House). They could hold him in the Capitol jail, but this is an extremely rare thing that hasn’t been done since 1935. More likely, the Speaker of the House would refer the matter to the D.C. U.S. Attorney’s office for criminal contempt proceedings. The law then requires the U.S. Attorney to bring the matter before a grand jury.

If found guilty, Strzok could face a fine, or even spend between one and 12 months behind bars.

Based on a plain reading of the statute, Strzok’s refusal to answer would appear to be a violation. However, the risk of compromising ongoing investigations is something that courts take seriously. The FBI often successfully uses this same reason for not turning over documents in Freedom of Information Act requests.

A day earlier, FBI attorney Lisa Page, with whom Strzok had an affair and exchanged politically charged text messages that were the focus of the hearing, was supposed to appear before the House Judiciary and Oversight and Government Reform Committees. Page opted not to show up despite being subpoenaed, claiming she didn’t have enough time to prepare. She too could potentially face a contempt charge, as Goodlatte said he would “use all tools at our disposal to obtain her testimony.”