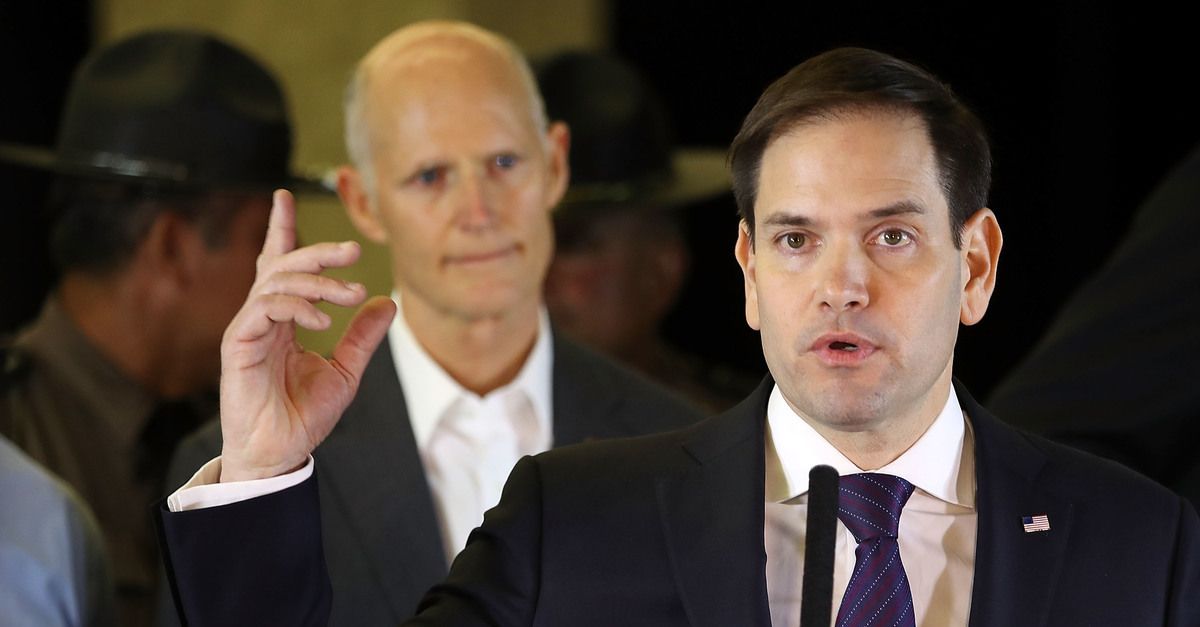 A federal judge dealt a devastating blow to Florida Governor Rick Scott on Thursday by ruling that the state’s law requiring signatures on ballots to match signatures on file has been applied in violation of the U.S. Constitution. This order also contains some epic trolling directed at Sen. Marco Rubio (R-Fla.).

Judge Walker offered a blunt appraisal of the current signature mismatch law passed by the Sunshine State’s Republican trifecta in 2016:

The precise issue in this case is whether Florida’s law that allows county election officials to reject vote-by-mail and provisional ballots for mismatched signatures—with no standards, an illusory process to cure, and no process to challenge the rejection—passes constitutional muster. The answer is simple. It does not.

The court then meticulously explains the process by which the now-ruled unconstitutional law has been applied.

“The right of voters to cast their ballots and have them counted is guaranteed in the Constitution,” Walker continued. “Once again, Florida’s statutory scheme threatens that right by rejecting votes based on signature mismatch without an opportunity to challenge that determination.”

In other words, Florida officials have been violating Floridians’ sacred right to vote–a right enshrined in the U.S. Constitution and upheld by federal courts for decades.

Beyond the win for Nelson and loss for Scott, Judge Walker also used a choice analogy to troll Florida’s junior Senator Marco Rubio.

Earlier this week, pretty much everyone in America made fun of Rubio for his clumsy attempt to invoke football in a tweet meant to cast doubts on the recount affecting the Senate race between Scott and Nelson.

“Imagine if NFL team was trailing 24-22 but in final seconds hits a 3 pt kick to win,” Rubio wrote. “Then AFTER game lawyers for losing team get a judge to order rules changed so that last second field goals are only 1 point. Well that’s how democrat lawyers plan to steal #Florida election.”

How exactly did Judge Walker take Rubio to the woodshed with this decision?

Consider the game of football. Football fans may quibble about the substance of the rules, but no one quibbles that rules are necessary to play the game. And no one quibbles that football referees make certain calls, under the rules, that deserve review. Indeed, not every call is going to be clear—the ultimate decision may hinge on highly subjective factors. Hence, a call will be overturned only when there is “clear and obvious visual evidence available that warrants the change.”

By heavily citing the NFL’s own recent rules patch, Judge Walker showcased his actual familiarity with the game.

“Among other things, the 2018 NFL Rules allow video review for plays involving possession, boundary lines, the line of scrimmage, and the goal line,” Walker trolled. “The NFL likewise provides review for disqualification of players. Coaches may challenge calls themselves by throwing a red flag, or, in certain circumstances, the referees may initiate review on their own. All that process. Just for a game. In this case, the Plaintiffs have thrown a red flag. But this is not football. Rather, this is a case about the precious and fundamental right to vote—the right preservative of all other rights…”

Such a move could certainly throw the race–or, football game–Nelson’s way.