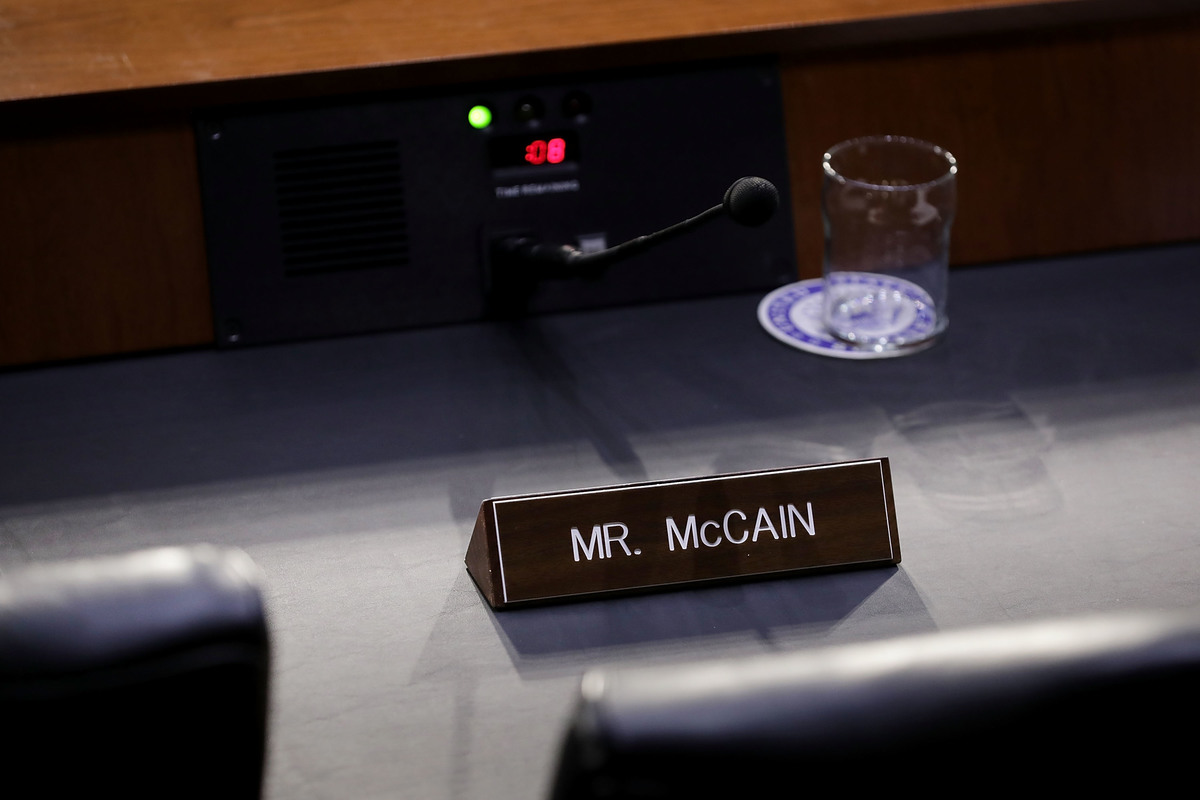 Though Arizona Democrats are currently–and publicly–keeping their “thoughts” with McCain’s family, the mostly revered senator’s passing could set up a scenario in which Republicans are forced to defend two Senate seats in 2018.

Throughout the country, Senate vacancies are disposed of in accordance with state law. Codified at AZ Rev Stat § 16-222 (2017), the law on point here begins as follows:

A. When a vacancy occurs in the office of United States senator or representative in Congress by reason of death or resignation, or from any other cause, the vacancy shall be filled at the next general election. At such election the person elected shall fill the unexpired term of the vacated office.

What happens in the interim? The statute continues. Section C notes, in relevant part:

For a vacancy in the office of United States senator, the governor shall appoint a person to fill the vacancy. That appointee shall be of the same political party as the person vacating the office and shall serve until the person elected at the next general election is qualified and assumes office…

Therefore, per Arizona law, the governor will appoint a replacement from the same political party as McCain–the GOP. This means, at the very least, that Arizona’s Republican governor Doug Ducey will select McCain’s Republican replacement after the recently departed senator is finally laid to rest and buried–as Ducey has himself indicated he plans to do.

So, what about the GOP’s collective sigh of relief that–in semi-crass terms–McCain didn’t die too soon? That is, so soon that his death would have triggered a special election to fill the now-empty Senate seat come November. Well, it may actually be a little too early for relief in that regard.

Recall: conventional wisdom on this front holds that McCain’s death occurred way past an alleged May 30 deadline. Apparently, the timeline here prevents the calling of a special election to fill the rest of McCain’s term in office–so Ducey can simply appoint his preferred replacement who’ll serve out the remainder of McCain’s term until 2020.

The potential issue here? This alleged–May 30 or May 31–deadline appears to be cobbled together from two separate timelines contained in subsection B of the statute. And subsection B outlines a series of requirements necessary to fill “a vacancy in the office of representative in Congress.” As both the statute and common understanding of U.S. politics makes clear, there is a distinction between a Congressional representative and a U.S. senator. Furthermore, the statute makes this distinction on multiple occasions.

The statute also notes: “for a candidate for office at an election held pursuant to this subsection, the following apply…” What follows are the timelines being pieced together for the allegedly past due date in question. Therefore, the statute can easily be read to suggest that the timelines/deadlines only apply to elections for the office under the subsection. And once again, this subsection apparently deals with a vacancy for a Congressional representative–not a U.S. senator.

(Additionally, the Arizona legislature more or less admitted as much about the law in question during a recent mad-dash by GOP legislators to revamp the statute–which stalled out after Copper State Senate Democrats blocked their efforts en masse. This, of course, would not be controlling in any potential judicial analysis but it makes the argument fairly clear to understand.)

In other words, the much-repeated deadline said to be preventing two Senate elections in Arizona this year may not actually exist.

What does exist, however, is guidance from Arizona’s Republican Secretary of State Michele Reagan. An article from AZ Central explains where seemingly every political journalist is getting this idea:

In other other words: the statute on point here is fairly ambiguous as to its actual meaning and application under the current set of circumstances. This statute has never been tested before. Ducey’s replacement for McCain’s seat will mark the first time in the state’s entire history that a governor has had to appoint a new senator because of a death in office.

So the idea that Democrats have to grin and bear a missed opportunity may just be that: an idea and nothing more. This idea relies upon one interpretation of a statute that’s never really been challenged. And there are other highly plausible interpretations.

The plain language of the law here appears clear and easy enough to understand. Again, the statute notes, “When a vacancy occurs in the office of United States senator…by reason of death…the vacancy shall be filled at the next general election.” There’s nothing about any kind of deadline in this section of the statute. Now, of course it would be reasonable–and even helpful–for Arizona to adopt some sort of deadline in the event of a senator dying while in office. So, in a sense, this is an argument in the deadline’s favor.

But that’s not always how laws are interpreted. Oftentimes, judges will look to the legislature’s apparent silence on an issue as simple proof that said legislature simply didn’t intend to legislate on the issue in question. And that’s certainly a possibility here.

The Arizona Secretary of State believes the alleged gap–if there even is a gap–here was plugged by the timelines contained in subsection B. But a lawsuit could easily argue otherwise. If Democrats are serious about contesting McCain’s historical Senate seat this year, expect such a lawsuit to be filed soon.