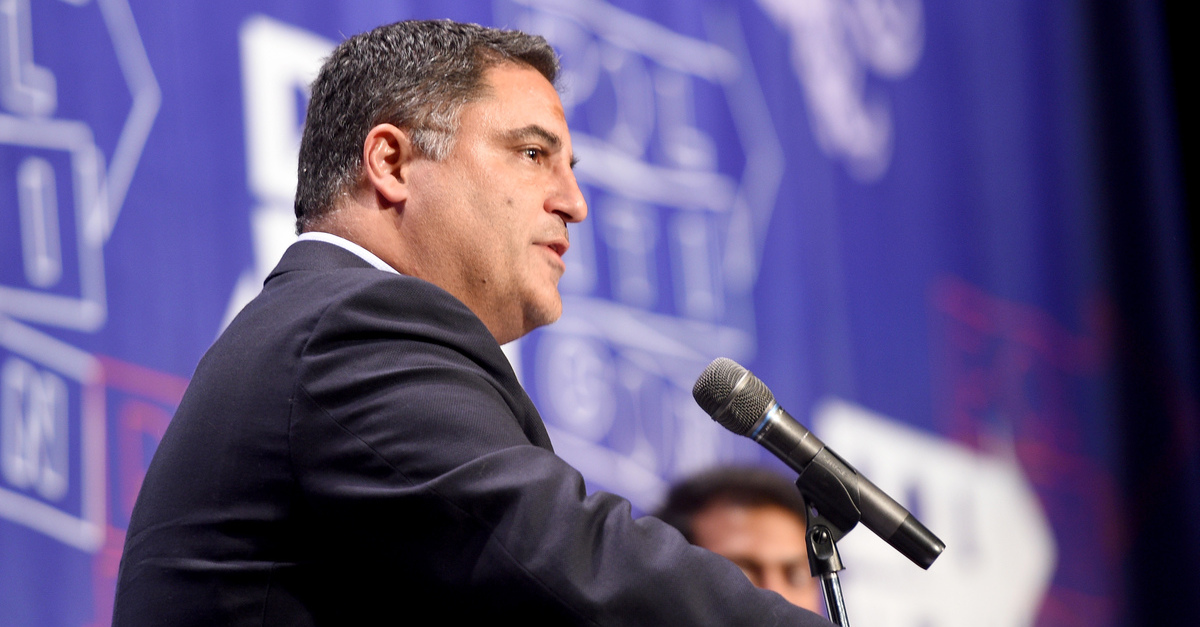 UPDATE: Roughly 40 minutes after this story was published, the New York Times issued a correction on its story. The Times story, which shows that it was updated at 6:40 p.m. EST on Dec. 16, said the following:

An earlier version of this article referred imprecisely to a remark by Cenk Uygur, a radio host who is running for a California congressional seat. When David Duke, the white supremacist, appeared on his show and denied being a racist, Mr. Uygur was replying sarcastically when he said, “No, of course not.”

Liberal media mainstay The New York Times recently published a story about a progressive congressional candidate that, based on the available evidence, appears to have intentionally misrepresented the candidate’s views. Because of this apparent and alleged (by the candidate) misrepresentation, the publication and the author of that article could be subject to a false light tort claim in California.

On Friday, December 13, the Times published Jennifer Medina‘s story headlined “Bernie Sanders Retracts Endorsement of Cenk Uygur After Criticism.” The piece was largely a recitation of the online controversy that swirled after the Vermont senator and Democratic presidential candidate endorsed–and then quickly un-endorsed–Uygur’s anti-establishment campaign to replace former congresswoman Katie Hill in California’s 25th Congressional District due to the candidate’s readily-accessible history of shock jock-style commentary and more.

One portion of that article stood out to many commentators as an egregious misrepresentation of what Uygur has said via The Young Turks show and TYT Network, which he owns and operates. Medina’s story references a confrontational interview Uygur conducted with well-known racist, conspiracy theorist, onetime Republican elected official and former Grand Wizard of the Ku Klux Klan, David Duke.

During that interview, Uygur shouts at, mocks and vehemently disagrees with Duke–accurately describing him as an antisemite. The host also refers to his guest as a “loser.” Near the end of their interaction, Duke makes the absurd claims that he’s “not what you’d call a racist” and Uygur sarcastically replies, “No, of course not.”

Here’s how the Times and Medina describe that interaction:

Mr. Uygur [has] hosted white supremacist figures, including David Duke. In one clip that circulated on Twitter, Mr. Duke ends an interview by saying, “I am not, what you call a racist,” to which Mr. Uygur replies, “No, of course not.”

The obvious discrepancy here was quickly noted by commentator and Justice Democrats co-founder Kyle Kulinski who tweeted out an extended portion of the Duke interview in which Uygur repeatedly raises his voice while taking the white supremacist to task.

This is stunning! @nytimes @JennyMedina claimed @cenkuygur said David Duke is “of course not” a bigot. This is the interview she was citing! They should immediately retract and apologize! pic.twitter.com/WUiM1xvX2U

A chorus of additional voices piled onto the Times‘ coverage.

Former Washington Post columnist Dan Froomkin wondered: “How is it possible this article has not been corrected?”

“If the NYTimes can lie about [Cenk Uygur], they can lie about you,” wrote The Hill‘s Krystal Ball. “They’ll twist your words, pretend not to hear your sarcasm and make you sound like you’re saying the exact opposite of what you are saying. This is outrageous and they should immediately retract and apologize.”

“There is no reasonable person that would watch this clip and not think David Duke was absolutely destroyed by [Cenk Uygur].” added Massachusetts Democrat and congressional candidate Brianna Wu. “This is what journalists do, hold powerful people accountable. The @nytimes should retract their untrue characterization.”

“This is lazy journalism,” wrote HuffPo’s Jessica Schulberg. “Anyone who watches the easily findable interview would see that [Cenk Uygur] is being sarcastic when he says ‘of course not.'”

Outrage aside, the story’s misrepresentation of Uygur’s conversation with Duke ticks all the boxes for a false light claim in California–which would be the proper jurisdiction for filing such a lawsuit.

Here, the third and fourth elements are easily satisfied and would not plausibly be in dispute because Medina’s story was specifically about Uygur, mentions him by name repeatedly and because the Times is the third- or fourth-most popular newspaper in the country. As a potential plaintiff, he was clearly identified and the story clearly meets the threshold for public disclosure.

This leaves the elements of falsehood, offensiveness and fault. We’ll address each element in turn by using the model jury instructions referenced above as a guide for how a claim might pan out.

First, Uygur would have to show that the New York Times and Medina publicized information or material that showed Uygur in a false light. Here, the false light which could plausibly be alleged is that the story suggested Uygur is friendly to and/or agrees with “white supremacist figures” due to Medina’s failure to note the sarcasm used by the Young Turks host.

The fact that Uygur made the utterance in question is immaterial–that is, not a defense–because the false light tort is not concerned with purely false statements. Rather, false light deals with false implications made by misrepresenting the truth.

The classic case describing a falsehood is Gill v. Curtis Publishing Co. In that case, Ladies Home Journal published an article describing “love at first sight” as dangerous and wrong with a photo of a couple entwined. There was nothing specifically false written about the couple and the photo of them was clearly real; their spooning embrace actually occurred. But the implication was that they were doing the “wrong” sort of love. They sued the magazine and won.

Here, Medina and the Times reproduced a true statement made by Uygur but failed to acknowledge the tenor of his conversation with Duke and, perhaps most importantly, failed to point out that Uygur’s response was a sarcastic retort. The implication here is arguably quite obvious: Medina and the Times failure to provide any context gives the implication that Uygur was agreeing with Duke–when, in fact, the opposite occurred.

Second, Uygur would have to show that the false light created by the publication would be highly offensive to a reasonable person in Uygur’s position. Accepting, for the sake of argument, that the New York Times and Jennifer Medina created the false implication that Uygur agrees with a Holocaust denying white supremacist, the only question is whether a reasonable person would be offended were such a lie imputed to them.

This is also a fairly easy element to dispense with. In California, courts have considered the test in two ways: (1) would the plaintiff’s sensibilities reasonably be disturbed or humiliated by such a false light misrepresentation; or (2) would an ordinary person object to being misrepresented in such a way. Uygur, himself, has already rejected the characterization and the second question isn’t really much of a question at all because very few people would accept having their views conflated with those of David Duke.

Third, Uygur would have to show, via clear and convincing evidence, that the Times and Medina knew the publication of his statement would create a false impression about Uygur or acted with reckless disregard for the truth or that the Times and Medina were negligent in determining the truth of the information or whether a false impression would be created by the statement’s publication.

Here, again, Medina and the Times reproduced a true statement that arguably would lead a reader to believe that Uygur actually agreed with Duke. The truth, again, is that Uygur did not agree with that statement and employed sarcasm to mock the man who claimed he was not racist. The likely question here is whether the Times or Medina actually understood that Uygur was being sarcastic–if they did, then there’s a valid argument that the would-be defendants acted with reckless disregard here. The major issue here would be whether Medina and the Times had access to–or were aware of–such additional information.

According to Uygur, they had exactly that information.

“When @jennymedina contacted me for her story I thought we had a shared understanding the Duke clip was obviously out of context,” Uygur tweeted. “She was immediately sent the full, combative debate as proof. That she completely ignored it [and] still published this lie is absolutely unconscionable.”

To hear Uygur tell it, not only was Medina aware that the clip she quoted from lacked the context of the broader “combative” interview, she told Uygur she was aware the clip was taken out of context and was “immediately” given the necessary context to accurately report on the exchange–but ultimately decided to ignore the facts in favor of a narrative that misrepresented Uygur.

If there’s textual evidence of this exchange between Uygur and Medina, that would be devastating to the reporter and the Times were they to claim they simply didn’t know the whole truth.

“The intentional and malicious reporting by @jennymedina has made me question anything I’ve believed through reporting by the @nytimes,” tweeted TYT host and executive producer Ana Kasparian. Due to Kasparian’s proximity to Uygur and TYT, her statement suggests some knowledge of the events leading up to the story that cast Uygur in the false light.

Kasparian also echoed a legal term of art touching upon the strongest defense the Times or Medina could have–that they didn’t act with “actual malice” by publishing Uygur’s statement out of context. Since Uygur is a public figure, he would have to show Medina and the Times not only disregarded the truth but that their conduct rose to the standard of actual malice–a typically heavy burden.

In Solano v. Playgirl, Inc., an actor won a claim against the nude magazine for using his image on the cover and implying that his nude image would be contained within. In the actual malice discussion the court noted how “during the editorial process someone raised concerns” about the suggestiveness of the actor’s photo on the cover.

Here, there’s an open question as to whether Medina actually discussed receiving the full context of the interview with her editor(s) but there is evidence that she was aware the interview was “combative” and simply chose to ignore the context. Furthermore, Uygur has stated that Medina agreed with him about said context and then published the false light representation anyway. That would be a knowing misrepresentation of the truth.

But let’s dismiss that for now. Assuming that maybe Medina didn’t view the full video after being provided with it by Uygur, a jury could even still reasonably infer that she and the Times acted with reckless disregard for the truth. That might be a closer call, but a judge could still send the question to the jury on that fact alone.

Law&Crime repeatedly reached out to Medina and the New York Times for comment and clarification but no response was forthcoming at the time of publication.

Editor’s note: this story added an update post-publication that the Times corrected its story.