‘Have the Courts Recognized FOMO?’: Lawsuit Against NFL Over Blown Call Is as Weird as Everyone Hoped 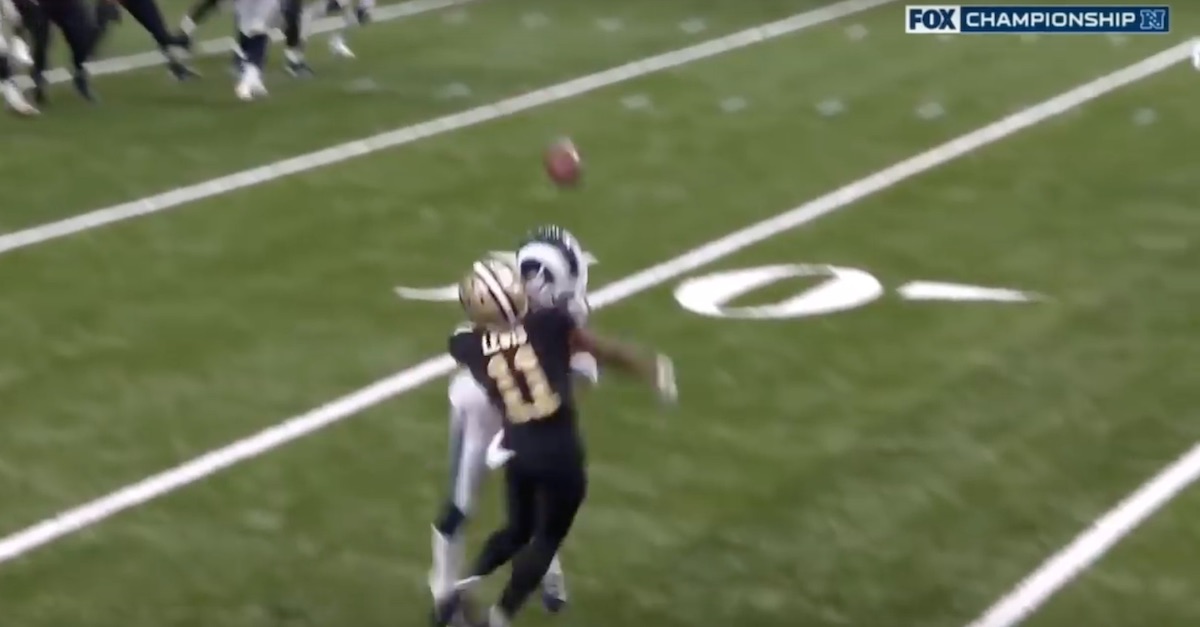 Two season ticket holders who have filed a lawsuit against the NFL over the no-call in the NFC Championship game that ended up costing their New Orleans Saints a Super Bowl appearance have gotten their day in court. It was as weird as everyone hoped.

As Law&Crime reported before, Louisiana lawyer Frank D’Amico Jr., who calls himself on his firm’s website “The Strong Arm of the Law,” filed a civil lawsuit against the NFL on behalf of Tommy Badeaux and Candis Lambert. Here’s D’Amico Jr. on the right holding exhibit A proof of the civil wrong:

In the initial complaint, D’Amico demanded a hearing before the Super Bowl, and that’s exactly what he got on Monday. The Super Bowl will, of course, take place on Sunday, Feb. 3, and the Saints will be nowhere to be found.

D’Amico is suing the NFL and league commissioner Roger Goodell for “Past, present and future mental anguish and emotional trauma,” “loss of enjoyment of life,” and “distrust of the game which has become the National pastime.” D’Amico has said that the “impact of the non-call is egregious and demands recourse,” and that Badeaux and Lambert have lost their faith in the NFL.

“As a direct result of the said incident, plaintiffs herein have been left bereft and with no faith in the National Football league for fairness despite the league’s own rules to correct such errors, along with emotional anguish, monetary loss for ticket holders, who purchases tickets with the presumption of integrity and fairness,” the lawsuit continued.

The local court reporters had a field day with the details of the bizarre scene, plus the back-and-forths between D’Amico and NFL attorney Gladstone Jones.

There are more lawyers in court than the number of spectators and media members combined. https://t.co/7DUXzpZWhH

The plaintiffs have a veritable army of lawyers at their disposal compared to the NFL, but D’Amico showed his Petition’s prayer (the legal term is “prayer for relief”) on a “big screen.”

Mr. D’Amico is attempting to answer the Judge’s questions. He shows Judge his Petition’s prayer on the big screen. Prayer seems like a good term in this case.

Attorney Donald Chick Foret quipped that “Prayer seems like a good term in this case.” One might even call it a Hail Mary?

“Under the rule, the commissioner can take any necessary corrective measure, including re-starting the game from the point of the incident or from the beginning,”  as New Hampshire Law Associate Dean Michael McCann previously pointed out.

That came up again on Monday.

"We are not asking for money damages," Frank D'Amico Jr. says of the two plaintiffs against the NFL over the blown PI call in the NFC title game. They want Commish Goodell to take action under NFL Rule 17 re: a "calamity", he says.

Getting Goodell to replay at least a portion of the NFC title game is "the only suitable remedy, in our opinion," says plaintiffs' lawyer Frank D'Amico Jr. about fan lawsuit.

“We’re not trying to stop the Super Bowl from going forward,” D’Amico said. “We’re asking a court to compel the commissioner to follow the rules.”

Alongside D’Amico representing Tommy Badeaux was Roderick Alvendia, who claimed his client had the right to get a shot at Super Bowl tickets via “lottery.”

“Have the courts recognized FOMO?” asked Todd A. Price of the Times-Picayune.

Have the courts recognized FOMO? https://t.co/q0ygHe8a5m

Gladstone Jones replied, saying that the commissioner’s discretion regarding Rule 17 does not exist for ordering a penalty flag, that the league has been investigating, and acknowledging that the fans have a right to be upset.

“The NFL gets it. When its fans are upset, the NFL is upset,” he said. “It’s a call the National Football League would have liked to see made.”

Gladstone Jones, lawyer for NFL,, says Rule 17 is "all about" the commissioner's discretion, but that no such discretion exists for ordering a penalty flag.

Gladstone Jones, lawyer for NFL:
‘The NFL gets it. When its fans are upset, the NFL is upset…It’s a call the National Football League would have liked to see made.”

Jones says NFL has reviewed tape, talked to refs, to Saints owner Gayle Benson, coach Sean Payton, etc. over blown call. "This is not something that's been laying at the doorstep" of the NFL, unreviewed.

Is the case unprecedented? Judge Susie Morgan and others seemed to think so.

Judge says: “I haven’t seen a case like that”.

Nothing was resolved and Judge Morgan ordered the attorneys to meet in her chambers at 5 p.m.

D’Amico, for his part, hopes that all of this will result in “an investigation” with published results.

I asked D’Amico on the courthouse steps what would be a win for you? He said “we go back to state court and then there is an investigation “.

Discussion is now moved to having an investigation and publish the results.