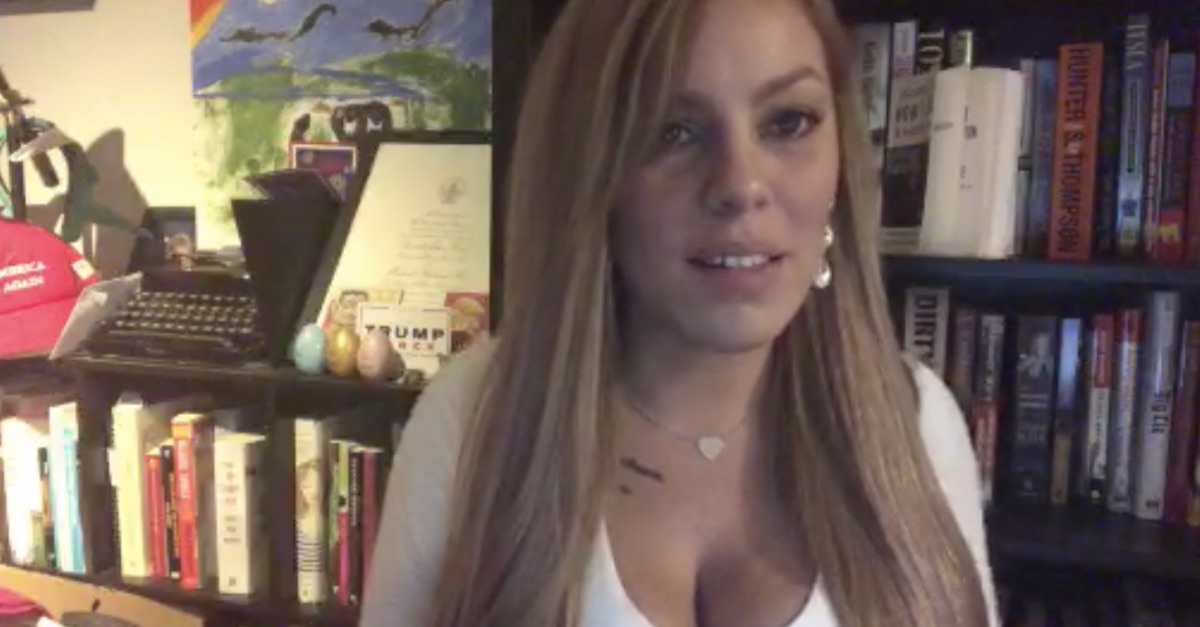 A lawsuit brought by Gateway Pundit writer Cassandra Fairbanks against Splinter News’ Emma Roller was dismissed by a federal judge Thursday, and the word “trolled” was featured prominently in the first line of opinion.

Federal Judge not only dismissed the Cassandra Fairbanks/Robert Barnes lawsuit against Emma Roller, but called Fairbanks a troll in the very first line of the Opinion. Cc: @BradMossEsq https://t.co/628HRL5FFe pic.twitter.com/kuOLu7VozL

“Plaintiff Cassandra Fairbanks trolled the web through Twitter, releasing a photo of herself and a fellow journalist in the White House press room making a gesture widely recognized as the ‘okay’ hand symbol but also speculated at the time to be a ‘white power’ symbol,” Judge Trevor N. McFadden began.

The judge said Fairbanks was obligated to support her defamation claim by “alleging facts that support a finding of actual malice on the part of Ms. Roller.”

“Because Ms. Fairbanks has failed to allege such facts, Ms. Roller’s Motion to Dismiss under the Federal Rules of Civil Procedure will be granted,” the judge said. “None of these arguments comes close to satisfying the First Amendment’s demanding standard for public figures bringing defamation actions.”

The opinion says that there was a debate at the time as to whether the “okay sign” was being used by the alt-right to mean “white power. Roller linked to an Anti-Defamation League (ADL) site to support that. As Law&Crime reported previously, the ADL stated that the gesture Fairbanks used was not a white power signal, and that the nefarious meaning behind the gesture is a “hoax.”

“They’ve become so easy to troll that you don’t even have to make an effort anymore,” Fairbanks responded to Roller in one instance. “The outrage is cracking me up” she tweeted in another.

“Please tell me you guys made the OK sign to troll off this fantastic lefty hysteria,” documents record Fairbanks responding to another tweet.

Fairbanks’ attorney, Law&Crime columnist Robert Barnes, filed the lawsuit last year against Emma Roller when she accused Fairbanks of making a “white power hand gesture” in a picture with Mike Cernovich. Roller eventually took down the tweet you see below: 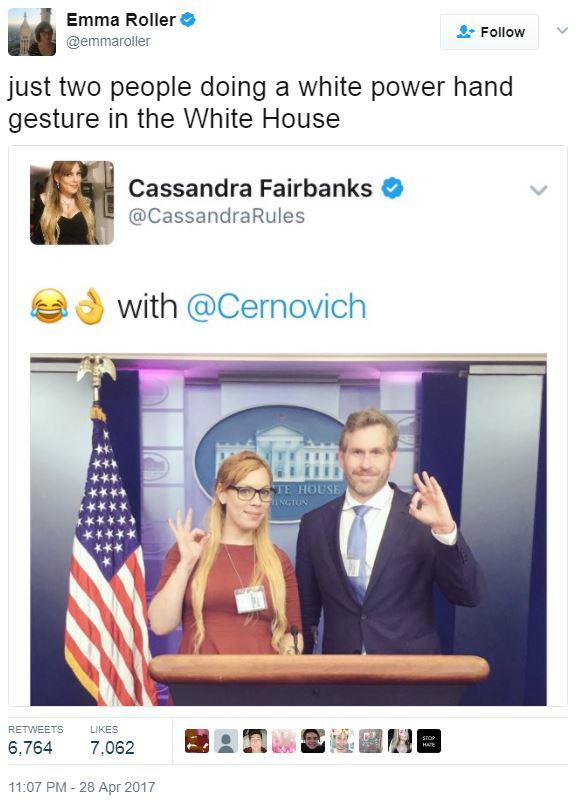 Fairbanks responded to the dismissal Thursday by telling Law&Crime that they “were lightly trolling — but not in the way that they claim.”

“When giving speeches, President Donald Trump does the ‘okay sign’ when he is making a point. He does it so often that Trump supporters began doing it as a sign we support the President,” she said. “Unbeknownst to me at the time, 4chan decided to create a meme saying it meant ‘white power,’ which even the ADL has debunked.”

“We were lightheartedly trolling in the ‘we support Trump and are in the briefing room invading the mainstream media’s space’ kind of way — not in a ‘white power’ way. It is absolutely absurd to call either of us a white supremacist. I’m Puerto Rican for goodness sake, I wouldn’t even be allowed in an ethno state,” she added.

Gizmodo Media Group spokesperson David Ford said in a statement that the case against Roller was an attempt to intimidate a reporter who had an eye on the political fringe.

“We believe this suit was a clear attempt to intimidate reporters who scrutinize the activities of those on the fringe and we’re pleased that the Court applied the strong First Amendment protection for public debate and dismissed this case,” he said.