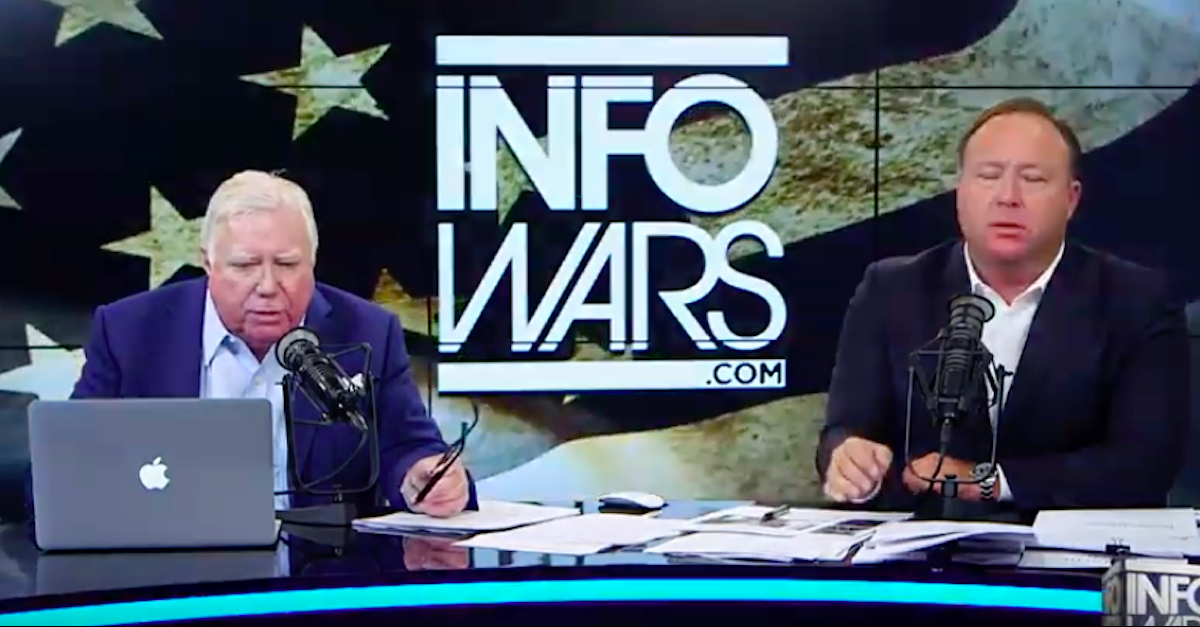 Jerome Corsi, the right-wing author who had a very public falling out with former associate Roger Stone, now seems to be at odds with his former employers. On Thursday, Corsi filed a lawsuit against InfoWars, Alex Jones, Jones’ father David Jones, and InfoWars host Owen Shroyer. Corsi was once a regular on InfoWars’ programming.

In the complaint, Corsi alleges that Alex and David Jones–as owners of InfoWars–and Shroyer, have worked in concert with Stone “to defame, intimidate, coerce and threaten” him and his attorney Larry Klayman, “to try to improperly influence the Mueller Russian collusion investigation and to coerce false testimony from Plaintiff Corsi favorable to Stone in his upcoming criminal prosecution.”

The lawsuit basically claims that InfoWars was an extension of Stone in carrying out his alleged smear campaign and threats against Corsi.

Corsi previously filed a complaint against Stone in a separate lawsuit, where he accused the political operative of threats. That case is ongoing. The new complaint against InfoWars was filed by Klayman, who also named himself as a plaintiff.

The lawsuit kicks off with what seems to be reminders of conspiracy theories that Alex Jones has promoted through InfoWars, such as the notion that the Sandy Hook school shooting was a hoax. There was also mention of the infamous “Pizzagate” conspiracy theory, which asserted that a child sex ring was being run out of the basement of a Washington, D.C. pizzeria.

The complaint then goes on to list ways in which Stone allegedly threatened Corsi, before describing how the defendants in this case allegedly conspired with Stone. The complaint points to a video posted by The Daily Caller, where Shroyer and Stone appeared together, with Shroyer saying he would act as Stone’s mouthpiece while Stone is under a gag order in his criminal case.

“The other Defendants, like Stoyer, are also surrogates of Stone,” the complaint says.

The lawsuit does not limit its allegations to statements or actions that have taken place during Stone’s criminal case. It also points to alleged defamatory statements in videos going back to Oct. 26, 2018. On that date, the complaint says, Jones said on the air that Corsi “seemed to be extremely mentally degraded to the point of what I would call dementia,” that Corsi was seen at a restaurant where security “thought he was dead in the elevator,” and that “whatever comes out of his mouth ain’t the truth.” Corsi notes that Stone was also in the same video.

After a list of allegedly false statements from Stone about Klayman himself, mostly accusing him of being a terrible lawyer, the complaint then goes back to statements that Stone made on InfoWars about Corsi, specifically related to allegations that Corsi was willing to lie about Stone under oath to Special Counsel Robert Mueller‘s office. Stone’s ongoing criminal case involves alleged false statements about communications he had with Corsi about WikiLeaks. Corsi continues to point out in the complaint that he has not been accused of any wrongdoing.

In addition to defamation claims, Corsi and Klayman also accuse InfoWars, the Joneses, and Shroyer of unfair competition. They claim that they–like InfoWars–appear on the radio and in online videos, and that the alleged defamatory statements against them are “highly likely to mislead and influence supporters’ decisions to provide financial support and sales to Defendants instead of Plaintiff.”

They also present an assault allegation, claiming that the defendants threatened them “in a similar manner that co-conspirator Stone has used to make death threats to at least one material witness involved in Special Counsel Mueller’s Russian collusion investigation.” This claim appears to try and put these threats under the definition of assault that includes intentional acts that cause reasonable apprehension of immediate harm or offensive contact.

Law&Crime reached out to InfoWars for comment, but they have yet to respond.