Shame on You For Congratulating Mom in Viral Child Beating Video 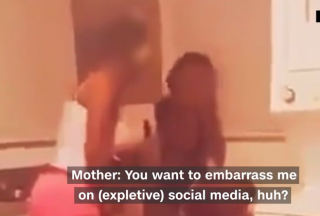 The Facebook Live video of a Georgia mother beating her 16 year-old daughter went viral this week, as viewers lined up on either side of the debate over the wisdom of corporal punishment.

According to the mother, the 16 year-old girl had been acting trampy by posting sexy pictures of herself on Facebook and having sex in the family’s home. Mom was understandably compelled to impart a lesson about appropriate behavior; she did so by filming a four-minute beating with a side of screaming, cursing, and public shaming. “You’re only f—–g 16! And you wanna be a THOT!” The video ended with the girl whimpering in the corner, while mom adjusted her hair and asked for the video to be made viral while she continued the well-deserved beating. So, misuse of social media is apparently an apple-and-tree situation in this household. Well, at least I learned the meaning of “THOT” (“that hoe over there”).

Predictably, the video did go viral, and the mom received heaping servings of both criticism for her over-the-top discipline and praise for her stalwart parenting. Local police investigated after learning of the video, and no charges were filed; the Department of Children and Family Services is now following up. Meanwhile, commenters of the world over are rushing to this mother’s defense, citing the extreme difficulty of raising a teen today, as well as the age-old logic: “I was beat and I turned out just fine.” I think more fitting letters would be SMDH.

Let’s be clear. Beating your children is not okay. Beating them on camera and distributing the footage on social media is especially not okay. I don’t want to hear any nonsense about how parents have the right to use corporal punishment on their children or about how this mother had all the best intentions.   This video doesn’t show a parent productively disciplining a child. In my opinion, it goes beyond that. Had the violence, screaming filmmaker been this kid’s father, and had the victim been her mother, it would have been a different story. DCFS might well have removed the child from their custody based on the danger of exposure to domestic violence. The fact that the child was the actual victim, and not simply an observer hardly makes the incident less extreme.

The line between appropriate discipline and child abuse can sometimes be less clear than is convenient. Still, the factors law enforcement considers when evaluating a parent’s right to discipline include the purpose, the severity, the effect and the context of the discipline. Humiliation is never an appropriate form of discipline, and a parent does not have the right to publicly shame a child, no matter how much that parent or her peers believe the child might benefit from that shaming.

Supporters of the mother have pointed to a public post by the teen herself, apologizing for having embarrassed her mother and assuring the public that she understands and loves her mother. The girl’s contrition is proof of success of her mother’s unorthodox methods, the defenders argue. But this girl’s affection for her mother is the root of the problem here. This sixteen-year-old has been taught that the person who loves her most in this world will beat and shame her. She has been taught that her home is a place where violence thrives and where problems are handled with cruelty and indignity. And that, right there, is the fuel that propels the cycle of violence. When this sixteen-year-old is next beaten, next humiliated, next treated without respect, she will receive that abuse with the knowledge that being victimized isn’t mutually exclusive with being loved. Violence and shame at the hands of her mother will give way to violence and shame at the hands of her lovers and friends, until she eventually uses violence and shame against her own children. Every congratulatory post for this mother’s tough parenting is equally to blame. If we can’t recognize abuse when we, as detached adults, see it in living color, a frightened child has no chance.