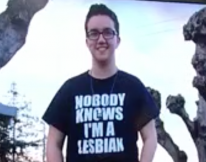 Sierra High School of Manteca, California reached a settlement with a female student it sent home for violating its dress code. Taylor Victor, 16, arrived at school in August 2015 wearing a shirt bearing the phrase “Nobody knows I’m a lesbian.” According to the complaint filed in October, school officials sent her home, claiming the shirt “promoted sexuality” and was potentially “gang related.”

After the dismissal, Victor, a junior who came out the year before, and her father met with the school and discussed the dress code. Principals Greg Leland and Dan Beukelman explained that students were not permitted to display “personal choices and beliefs on a shirt,” and that violators could be expelled. Victor filed a federal lawsuit, enlisting attorneys from the American Civil Liberties Union, who argued that the public school violated her rights by censoring her personal beliefs. Victor stated that she wore the shirt in order to show other students that they should be proud of who they are.

As a result of the settlement, the school will modify its dress code to allow students to express themselves, and have administrators go through professional development training. They agreed to pay Victor $1 in nominal damages, and $63,000 in attorneys’ fees. She is now permitted to wear the shirt without being subject to punishment.

The same shirt has been at the center of lawsuits in other parts of the country as well.