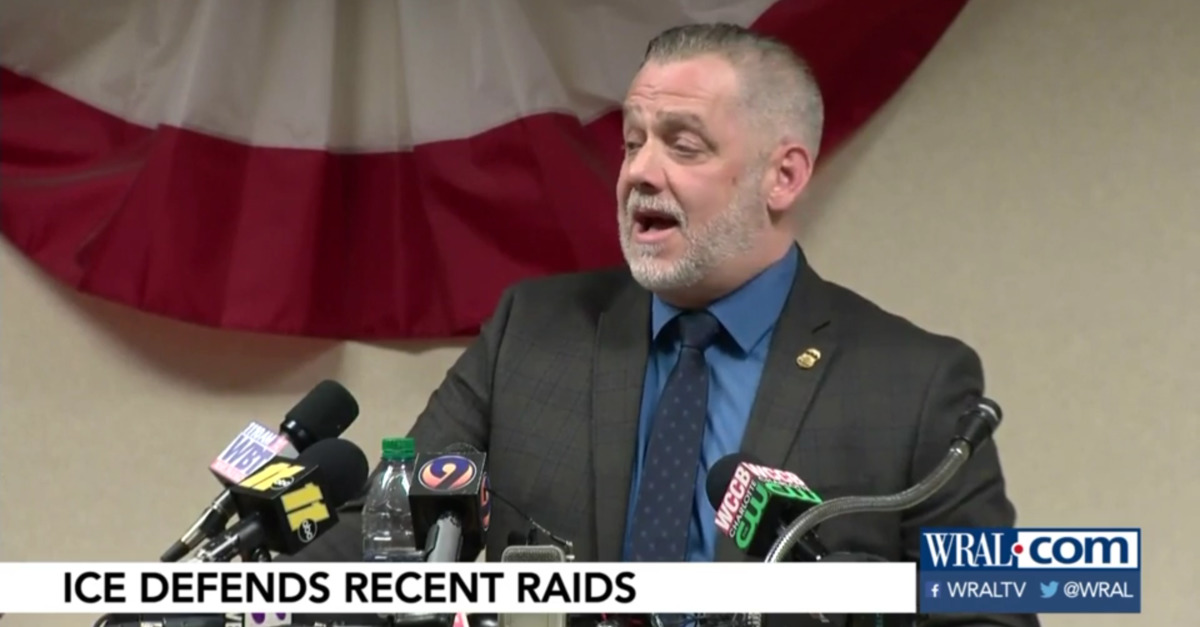 Over the past week, nearly 230 people in North Carolina have been rounded up by black-jacketed Immigration and Customs Enforcement (ICE) agents. And local sheriffs are not at all happy about the wide-ranging immigration raids.

“The recent actions of ICE agents are making persons in our community afraid of law enforcement,” Durham County Sheriff Clarence Birkhead said in a statement. “The decision I made to not honor ICE detainers was in part to help all of Durham’s people feel safe and encourage our residents to feel like they can trust my deputies – and law enforcement in general.”

As Law&Crime previously reported, ICE officials threatened North Carolina with “increased enforcement activity”–deportation raids–last December after several sheriffs announced they would no longer collaborate with the agency by holding undocumented immigrants in custody after they had already posted bail under the auspices of the 287(g) program.

The 287(g) detainer program is used by ICE to keep undocumented immigrants in jail based on their immigration status alone. A typical detainer request asks local law enforcement to detain an individual suspected of an immigration violation for an additional 48 hours–after they would have already otherwise been released by authorities–so that ICE agents have time to show up and take them into custody.

Many North Carolina sheriffs campaigned on ending their offices’ cooperation with ICE’s much reviled 287(g) program–and at least one such office never had any sort of cooperation agreement with ICE in the first place.

“It really forces my officers to go out on the street to conduct more enforcement operations out in the community, at courthouses, at residences, doing traffic stops,” Gallagher said at a press conference on Friday night. “We don’t want to be out doing this at-large enforcement. It’s much more dangerous for my staff, the general public and those being arrested.”

William Saenz is the communications director for immigration advocacy group El Pueblo. In comments to local NBC affiliate WRAL, Saenz slammed ICE’s latest series of raids–noting that many of the people detained were “family breadwinners.”

“That’s borderline political persecution,” Saenz said. “And the fact that these communities helped to vote you out because you were creating greater insecurity–your response is to essentially destroy their lives and separate families.”

Gallagher also attempted to stoke fear by claiming that Tarheels “would be shocked at the types of individuals” rounded up by his agents.

Local sheriffs dismissed that criticism–noting that once conditions of bail are met, accused criminals are often released from jail.

“The Wake County Sheriff’s Office has no role in immigration enforcement,” Wake County Sheriff Gerald Baker said in a statement. “[It] makes no difference whether a person is in this country legally or illegally. If he or she breaks any law in this county, they will be arrested and prosecuted. Any individual released from the Wake County Detention Center has met requirements of bail set by the courts. We release individuals by order of the courts.”

Gallagher seemed adamant, however, about making good on ICE’s threat from late last year about increasing the agency’s deportation raids in the area.

“The new normal is you will see more visible ICE presence out in the communities,” he said.