With Scalia’s Death, Conservatives Could Lose These Court Battles 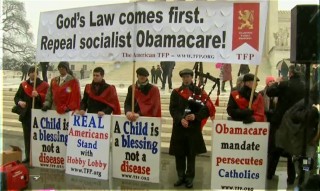 With the U.S. Supreme Court’s future in limbo for the next 11 months as the Senate fights off President Obama’s attempt to nominate a new Supreme Court Justice, the death of Scalia means that the court will likely be split 4-4 on many critical issues that come before them.

SCOTUS legal experts say one of two likely scenarios will happen: 1) In a 4-4 decision, the Supreme Court will basically affirm the lower court’s decision — that means whatever the lower court decided is the decision (for now) 2) the cases will be scheduled for reargument until a new Justice is appointed.

“There is historical precedent for this circumstance that points to the Court ordering the cases reargued once a new Justice is confirmed. Whether that precedent will be followed is not perfectly clear, because it is uncertain when a new Justice will replace Justice Scalia,” Tom Goldstein wrote on Scotusblog.com.

If the cases are scheduled for reargument, then the outcome is largely dependent on who wins the election in November, and who is appointed as the new Supreme Court Justice. However, if the court issues a 4 to 4 decision, LawNewz.com took a look at the cases that could be affected and deal a blow to conservative causes. The cases involve everything from voter rights, unions, and the so-called contraceptive mandate:

However, it is important to note that any 4-to-4 decisions would carry no binding precedent meaning the U.S. Supreme Court could take up another similar case in the future. If on the other hand, the Justices decide to set the 4-to-4 cases aside for reargument, they will remain in legal limbo.

“It stays with whatever status it has, unless there is a motion for some kind of change pending final resolution.” Rick Hansen, who is a University of California-Irvine professor told LawNewz.com