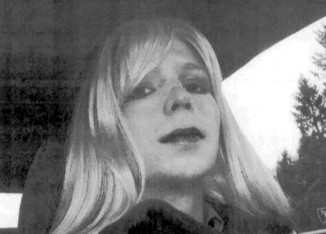 The American Civil Liberties Union (ACLU), along with a number of other groups, sent a letter to Barack Obama last week that asked the 44th president to commute Chelsea Manning’s sentence for disclosing classified material.  Manning is currently in the seventh year of a 35-year sentence at the United States Disciplinary Barracks at Fort Leavenworth.  The White House reportedly already declined to comment on the ACLU letter at a daily press briefing last week.  However, the White House may still be forced into issuing a formal response on this matter thanks to a separate petition drive set up on Whitehouse.gov back November.

In a tweet published on Sunday, Manning referenced the petition and noted that it has now surpassed the 100,000 signature threshold that may require a White House response within 60 days.

I don’t know what to say. I am just grateful that I am not forgotten. You’ve given me hope. =’) #timeserved pic.twitter.com/iKne8iA5EA

The official “We the People” White House petition website states, in part:

With We the People, you can easily create a petition online, share it, and collect signatures. If you gather 100,000 signature in 30 days, we’ll review your petition, make sure it gets in front of the appropriate policy experts, and issue an official response.

The terms of the website say they will do their best to provide an official response within 60 days of a petition obtaining the threshold 100,000 signatures.

The Manning petition clearly surpassed the 100,000 signature threshold, but does that mean the White House will respond?

It seems rather doubtful that the White House will respond, despite the petition surpassing the threshold number.  Here is why:

There is caveat in the terms on the “We the People” website that says, “In some cases, the White House response might not address the facts of a particular matter to avoid the appearance of improper influence (such as in specific procurement, law enforcement or adjudicatory matters).”

According to NBC News, Manning’s legal team formally petitioned President Obama last month to commute Manning’s sentence.  To date, there is no indication that the Obama White House has made a decision on that request.  Therefore, Manning’s case would likely fall under the caveat where the White House does not have to respond in order “to avoid the appearance of improper influence” in “adjudicatory matters.”

The White House likely relied on this same basic principle to avoid commenting on the recent ACLU letter too.

At that point, it is pretty much anyone’s guess as to what will happen with pending “We the People” petitions.  There is no guarantee Trump will continue the practice of responding to these petitions in his administration.

LawNewz.com reached out to the ACLU to ask for their thoughts on this issue and we will update this article when we receive a response.