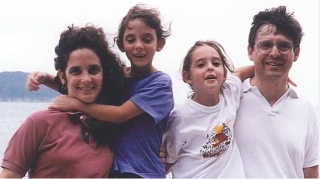 President Obama’s Supreme Court Nominee, Chief Judge Merrick Garland, shares his story and his thoughts on being nominated to sit on the nation’s highest court in a new video just release by the White House—along with an exhaustive list of Garland’s credential and supportive quotes from Republican Senator Orrin Hatch, Supreme Court Chief Justice John G. Roberts, and more.

The sentimental video package opens with a vintage picture of Garland in a plain white polo, hair blowing in the wind as he stands on the beach accompanied by the tender melodic sounds of optimism and justice. As the 63-year-old introduces himself in the confines of a modern cherry wood legal chamber, he quickly pivots to talking about Lynn Rosenman Garland, his wife of 18 years who he met a rehearsal dinner. “Somebody managed to put us sitting next to each other, and we always thought was an accident, but maybe it wasn’t. She is the most honest, straightforward person you can imagine.”

Garland goes on to talk about his two daughters, humorously remarking, “We have two spectacular daughters. Very athletic, very smart in math and science. They’re better at virtually all sports than I am.”

As the music hits its affection crescendo, Garland, choking back tears, says of the nomination, “When I’m standing with the President and he announces my nomination, I actually think it will feel like an out-of body experience…My mother will watch on TV, she’s still alive, she’ll be crying and my father…will be very proud.”

“I think the rule of law is what distinguishes our country from most other countries,” Garland says alluding to the fair and impartial judgments all people deserve, regardless of sex, race or otherwise. “On the one hand we have to make sure that people don’t settle their differences violently, and, on the other hand, make sure that there is a justice department that works and follows the Constitution…and I think that’s what judges are supposed to do.”

When watching the video, one can’t help but feel like this is part of the Obama Administration’s operation to push Garland’s nomination. It very much has a—you’ve heard about his qualifications, but get to know to the husband, the father—nostalgic feeling. Despite the descriptive sarcasm above, the video is quite touching, inspiring and reflective of Garland’s life work.