Trump’s Syria Strike May Get The U.S. in Some Legal Hot Water | Law & Crime
Opinion

Trump’s Syria Strike May Get The U.S. in Some Legal Hot Water 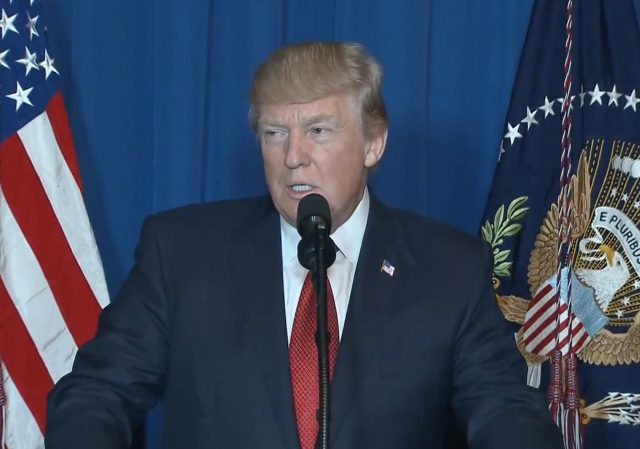 Earlier this week, President Donald Trump told reporters that news of the latest “heinous” chemical weapons attack in Syria, believed to be ordered by Bashar Al-Assad, had him reevaluating the situation in that country.

“My attitude toward Syria and Assad has changed very much,” President Trump said at a news conference. “It crossed a lot of lines for me,” the President said, referring to the chemical weapons attack.  During the campaign, Trump sometimes suggested Assad was the best thing for Syria, whereas Obama’s official policy was regime change in Damascus.  Staying coy as ever when asked about possible action, Trump made sure to tell reporters, “I’m not saying I’m doing anything one way or the other, but I’m certainly not going to be telling you.”

Late Thursday night, we found out what Trump was going to do about it and he made it very clear.  He ordered at least 50 cruise missiles launched at a Syrian airbase.  Reports as to the damage caused by the attack are still coming in, but he clearly sent a message.

While there has been some debate about the legality of the unilateral attack under domestic law, less has been said about potential international law implications.

LawNewz spoke with Professor Dakota Rudesill, Director of The Ohio State National Security Simulation, and an expert in the area of national security.  The professor explained that international law general prohibits use of force against another state, except under certain circumstances.

The first exception, is if the United Nations Security Council passes a resolution authorizing use of force. As we saw with Iraq back in 2003, that is a very cumbersome, difficult process, and clearly did not happen here.

The second use of force exception provides a country has a right to self-defense or anticipatory self-defense.  For example, in the 1967 Six-Day War, the Israelis claimed their actions were justified in launching a first strike on Egypt under the doctrine of preemptive war.  President George W. Bush also sort of revived the term after 9/11 to justify the invasion of Iraq under the idea that it needed to be rid of chemical weapons.

Finally, there is a third, far more ambiguous and unsettled area of international law that might justify use of force.  That is the idea that states are allowed to “intervene militarily in other countries to prevent bad acts” that will threaten collective international order or when “states violate the human rights of non combatants,” Rudesill said.  According to the professor, the United States has never “formally recognized the duty to prevent atrocities,” rather, they say “it is morally legitimate” action to take, but do not formally recognize it as a legal obligation to  do so.

This third point became the center of attention in the 1990s with Kosovo, and to to a less extent Rwanda.  In both cases you had human suffering, but in Kosovo, Bill Clinton decided to intervene with NATO, among other reasons, to stop genocide against a group of non-combatant civilians. The former President has since referred to his decision to not intervene in Rwanda one of his “biggest regrets.”

So, under these three generally accepted exemptions to international law’s prohibition on attacking another country, does the strike in Syria fall under any category?

According to Prof. Rudesill, the answer is likely no.

“Here again [as on the domestic front], the [Trump administration] is going to come under a lot of criticism.

He believes the administration will have a tough time “to make an argument based on an imminent threat to United States forces, its territories, or to its allies.”  The idea of  preemption or self-defense of its “interests” being threatened by Assad is a much more controversial idea under international law and would be even shakier ground to stand on, he said.

The strongest argument, that he still sees as a long shot, would be that the Syrian refugee flow due to Assad’s actions threatens the collective international order.  However, that issue seems to be tied more to Turkey at the moment and they were not hit with cruise missiles.

The bottom line, according to the professor, is Trump is likely to receive criticism at home and abroad over his decision. That may change, however, if perhaps the Trump administration makes Syria a focal point of a new U.S. policy.  But that would only insulate him for criticism of future attacks.