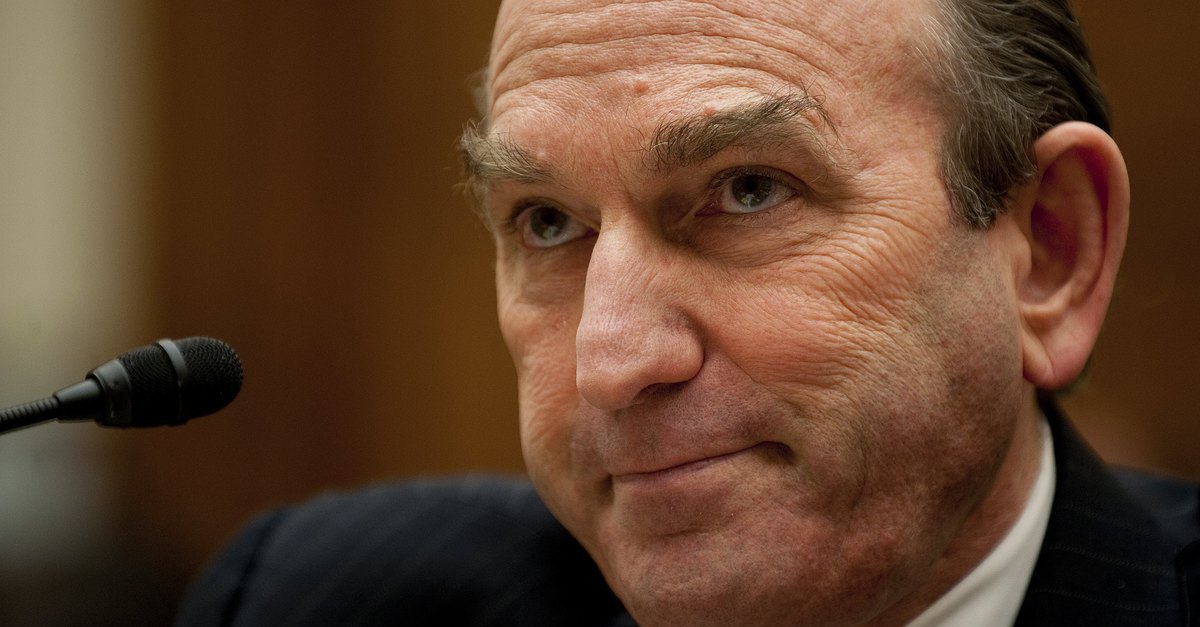 President Donald Trump is officially pushing for regime change in the Bolivarian Republic of Venezuela. On Thursday, the White House released a statement recognizing opposition leader Juan Guaidó as interim president in defiance of the country’s democratically-elected president Nicolás Maduro.

The man recently selected to lead the United States’ controversial overthrow efforts is so-called “abettor of genocide,” Elliott Abrams. A notorious neoconservative and coup plotter, Abrams pleaded guilty to crimes during the Iran-Contra affair but was later pardoned by then-president George H.W. Bush on the recommendation of once-and-likely-future attorney general William Barr.

Abrams’ was previously passed over for the number two position at the U.S. Department of State early on in the Trump presidency for writing a disparaging article about then-candidate Trump in May 2016 for the Weekly Standard. His star, however, appears to have risen once again.

And critics have taken notice.

Allan Nairn is a famed investigative journalist who documented a great deal of Abrams’ work as Ronald Reagan‘s assistant secretary of state for democracy, human rights, and labor from 1981 to 1985. Nairn recently took to Twitter in order to denounce Abrams an “abettor of massacres” who ultimately structured U.S. policy in Latin America toward abetting genocide.

#ElliottAbrams does indeed represent longstanding US policy. The problem is that that policy is to be willing to abet genocide, as the US did in Guatemala (under Abrams), as a Guatemalan court ruled last September after hearing evidence in a genocide trial in which I testified. https://t.co/QKWBaDfuVS

One of Ríos Montt’s key policies was a series of massacres and other war crimes perpetrated against various indigenous Mayan groups.

According to the Holocaust Museum of Houston, more than 200,000 people were slaughtered; exactly 626 villages were destroyed; and nearly 1.7 million people were displaced in a country with a total population of just over 7 million. Abrams never had a problem with those massacres and repeatedly criticized human rights activists and other critics of U.S.-backed Guatemalan death squads.

As the mass killings were taking place, Abrams fought in Congress for military aid to Ríos Montt’s bloody regime. He credited the murderous dictator with having “brought considerable progress” on human-rights issues. Abrams even went so far as to insist that “the amount of killing of innocent civilians is being reduced step by step” before demanding that Congress provide the regime with advanced arms because its alleged “progress need[ed] to be rewarded and encouraged.”

Buoyed by Abrams’ work, Reagan once said that Ríos Montt was “totally dedicated to democracy.”

Years after the dictator was ousted from power, Guatemala instituted a legally binding truth and reconciliation commission to look into the crimes that had occurred during Ríos Montt’s tenure. Sanctioned and mandated by the United Nations, this legal inquiry was known as the Commission for Historical Clarification (CEH). This commission later released an official report titled, “Guatemala: Memory of Silence.”

The CEH found that women comprised some 25 percent of all human rights victims. “They were killed, tortured and raped, sometimes because of their ideals and political or social participation, sometimes in massacres or other indiscriminate actions,” the report noted. Regarding children, the CEH “confirmed with particular concern that a large number of children were also among the direct victims of arbitrary execution, forced disappearance, torture, rape and other violations of their fundamental rights.”

The report’s “fundamental conclusion [is that] that genocide was committed” against the groups mentioned above.

The CEH’s findings were later officially endorsed by the Guatemalan legal system when Ríos Montt was convicted of genocide by Guatemala in 2013. The CEH’s findings were again endorsed by Guatemalan courts in May of last year when several high-profile former military officials were convicted of crimes against humanity for their roles in the massacre. In September of last year, a Guatemalan judge reiterated that genocide occurred there as a direct result of policies “imposed to protect the United States.”

Nairn previously brought up Abrams’ role in Guatemala’s genocide in 1995. In response, Abrams laughed about it.

The year was 1995. A young Elliott Abrams taught us how to laugh. Maniacally. When Allan Nairn brought up his involvement in the mass murder and torture of indigenous people in Guatemala. pic.twitter.com/N2nfDQAUrf

Now, human rights activists are concerned that Abrams might be tempted to resort to these methods of democracy and diplomacy.