Trump is Right, Conflict-of-Interest Rules Don’t Apply to Him 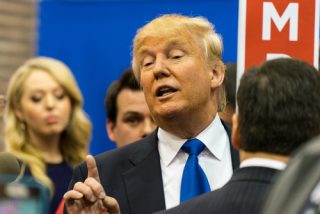 During a meeting with The New York Times, President-elect Donald Trump basically shrugged off concerns about his businesses, telling reporters that “[t]he law’s totally on my side. The President can’t have conflicts of interest.”

Trump on his businesses/conflict q’s: “The law’s totally on my side, the president can’t have a conflict of interest.”

Setting aside the troubling ethical implications of such a statement, from a purely legal perspective, Trump is right.  Both the Vice President and President are exempt from federal rules that prohibit executive branch employees from participating in matters in which they have financial interests.

In fact, 18 U.S.C. Section 202 specifically states, as relating to Section 208 which deals with financial interests:

“Except as otherwise provided in such sections, the terms ‘officer’ and ’employee’ in sections 203, 205, 207 through 209, and 218 of this title shall not include the President, the Vice President, a Member of Congress, or a Federal judge.”

The theory behind exempting the President and Vice President from this law is that they need to carry out their constitutional duties without legal restraints.

“On top of the language of Section 208, there has been a long debate over the application of ethics laws to the president. The position of the Justice Department in the 1970s was that such laws did not apply to the president–even before the insertion of the express exemption, ” George Washington Law Professor Jonathan Turley wrote in his blog.  However, in years past, presidents have taken steps to separate their business dealings from their political life, which is perceived as core principle of good governance.

Despite the ethic rule exemption, legal experts have pointed to a constitutional clause, which they say would cover President Trump when he takes office. The “Emoluments Clause,” which says that “no person holding any office of ”” the United States “shall, without the consent of the Congress, accept of any present, emolument, office, or title, of any kind whatever, from any king, prince, or foreign state.” In a recent interview, George Washington law professor Steven Schooner said that Trump could have an “impeachment issue because you have foreign states basically paying money to the Trump Organization by using their hotels.”

However, not all legal experts believe this clause applies to the President. “George Washington was not stupid or dishonest. He took diplomatic gifts and he didn’t ask for congressional consent and he didn’t get it. If he didn’t follow the Emoluments Clause, there is no reason to think President Trump has to either,” Seth Barrett Tillman, a lecturer at Maynooth University Department of Law told LawNewz.com in a recent interview.

And while Trump is right to say conflict-of-interest rules don’t apply to him, other laws governing this type of behavior do like the federal bribery statute and the Foreign Gifts and Decorations Act which explicitly prohibits the President from accepting gifts from foreign governments or international organizations except as permitted under the law.

And, interestingly, as President, Trump will have no legal protection from lawsuits that stem from his private life, thanks to a 1997 Supreme Court ruling after President Bill Clinton was sued by Paula Jones in a sexual harassment case.