Legal Scholar: ‘Wildly Inaccurate’ to Accuse Trump of Violating Constitution With His Businesses 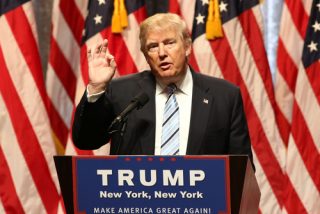 On Monday, LawNewz posted an article citing legal experts that said President-elect Donald Trump‘s conflict-of-interest with his hotels and other businesses raise serious impeachment concerns.  Several prominent experts have now come forward with similar theories stating that Trump could have an “impeachment issue because you have foreign states basically paying money to the Trump Organization by using their hotels.” These experts base this on an obscure provision of the U.S. Constitution called the  “Emoluments Clause,” But, Seth Barrett Tillman, a legal scholar, who has spent 8 years actually studying and writing about this clause, told LawNewz all of these so-called experts have it completely wrong and are “wildly inaccurate.”

He said if they had thoroughly investigated this clause, they would have come to the same conclusion that he did: the clause doesn’t apply to the president. In fact, there is some pretty convincing evidence that it doesn’t. Take for example, President George Washington.

“George Washington was not stupid or dishonest. He took diplomatic gifts and he didn’t ask for congressional consent and he didn’t get it. If he didn’t follow the Emoluments Clause, there is no reason to think President Trump has to either,” Tillman, a lecturer at Maynooth University Department of Law told LawNewz.com in an interview.

The Emoluments Clause says that “no person holding any office” of the United States “shall, without the consent of the Congress, accept of any present, emolument, office, or title, of any kind whatever, from any king, prince, or foreign state.” Some legal experts have interpreted this to mean that President Trump is barred from receiving foreign gifts.  But Tillman points out this clause was never intended to be enforced against the president.

“While (George Washington) was president, Washington received two gifts from officials of the French government — including a diplomatic gift from the French ambassador. Washington accepted the gifts, he kept the gifts, and he never asked for or received congressional consent. There is no record of any anti-administration congressman or senator criticizing the president’s conduct,” Tillman wrote.

“It is unfortunate that those that are speaking first and loudly haven’t familiarized with the literature regarding the Emoluments Clause,” Tillman said. “The President can accept gifts without trespassing on this clause. They are constitutionalizing an issue that should not be constitutionalized.” Tillman added that Trump could potentially be held liable under laws like the Foreign Gifts and Decorations Act, and federal bribery statutes. But bottom line, he said, this is a good governance issue not a constitutional one.