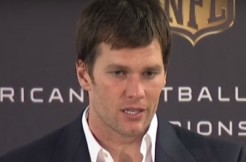 Tom Brady, the starting quarterback for the New England Patriots, announced on Friday that he’s dropping his legal action against The National Football League. In a January 2015 playoff game, he was linked to an alleged plot to deflate several balls, which would make them easier to throw. The league issued a four-game suspension. That was postponed because Brady resisted the claim in federal court, but he has now decided to concede. This announcement comes after an appeals court reinstated his suspension in April.

Brady will sit out the first four games of the 2016 season, scheduled to begin in September. “Deflategate” captured lots of attention because he’s one of the most successful quarterbacks in recent years, having led the Patriots to three Super Bowl victories.
–