‘No Exception for Awkward’: Judge Tells Stone and His Lawyers What’s What, Sets Trial Date 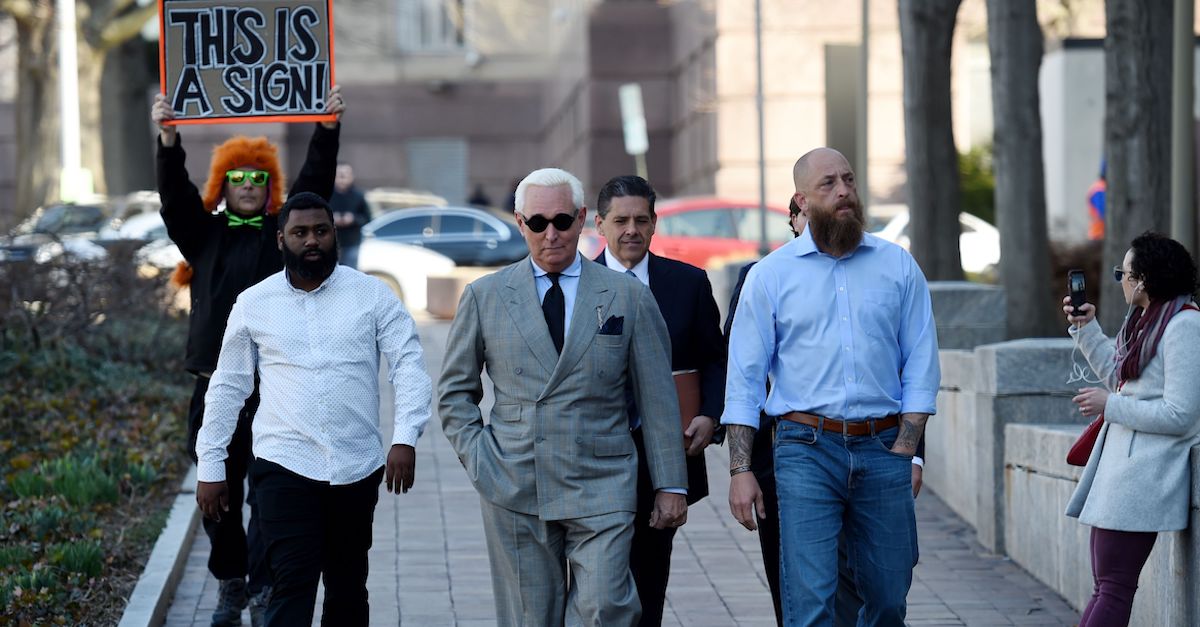 Roger Stone returned to U.S. District Judge Amy Berman Jackson‘s courtroom Thursday morning for a status hearing. It happened after Stone’s attorneys made their best effort to explain what the deal was with the re-release of a book titled The Myth of Russian Collusion.

Stone’s lawyers previously filed a status report at the judge’s command. Judge Jackson wanted them to detail their efforts to “come into compliance” with her gag order, which, in her view, was abundantly clear about prohibited communications. The gag order stated that prohibited statements about Robert Mueller‘s investigation included “posts on Facebook, Twitter, Instagram, or any other form of social media.” It also said Stone “may not comment publicly about the case indirectly by having statements made publicly on his behalf by surrogates, family members, spokespersons, representatives, or volunteers.”

The fact that the book specifically attacked Special Counsel Mueller as a “crooked” agent of the deep state, and commented about ongoing investigations, was of great concern to the judge.

Judge Jackson made it clear at the start of the hearing that she wanted Stone to sign an updated gag order today. She also wasn’t impressed with the defense attorneys’ response that telling her about the book release would have been “awkward.”

“I’m not sure that’s a very strong response from a very experienced litigator and officer of the court,” she said. “There’s no exception for awkward.”

“The last thing you should worry about is whether telling the court would be an uncomfortable experience,” she added. It should be obvious, but not being entirely forthcoming with a federal judge is not a good idea.

Prosecutor Jeannie Rhee said that the exhibits Stone’s lawyers included with their most recent filing appear to contradict the idea that Stone wasn’t aware of when the book was shipped and available for purchase.

Prosecutor Rhee notes that Stone’s own submissions to the court contradict his assertion that he didn’t know exactly when his book shipped and was for sale. One communication on Feb. 26, she noted, indicated that the book “had not been selling particularly well so far.”

Stone attorney Grant Smith, the exhibits showed, reached out to Tony Lyons of Skyhorse Publishing over email on Feb. 26 (five days after the gag order was issued) and demanded to know what was going on with the book.

“The mere publication of the new portions of the book could land Roger in jail for contempt of the judge’s order,” he said, with clear urgency. “We are trying to establish data points and provide legal advice. I can not give you more information without violating the attorney client relationship at the moment. I need this immediately. This is not a some made up emergency.”

Lyons did not understand why this was relevant.

“This all happened prior to the court order, so I don’t see how it’s relevant. I just don’t have the staff to do it this week,” he said, adding that the book hasn’t sold well. “We printed about 13,000-14,000 copies. We shipped most of them and they are all around the country in bookstores. They are not selling particularly well so far, but hopefully that will change.”

“That should be sufficient, right?” he asked, hoping that Smith’s asks had been answered. Rhee argued that this bit about book sales not going “particularly well” contradicted representations of Stone’s knowledge. Judge Jackson said that she hasn’t had been able to examine the exhibits yet and is still mulling over the book issue.

Smith also wanted to know if there was an ebook. Lyons confirmed that there was, and then asked, “Both were live long before the gag order, so we should be good, right?” Smith was not so sure about that.

“Hopefully,” he replied. This gave credence to the idea that the lawyers didn’t know what was going on and Judge Jackson acknowledged this; she also said she supposed “they probably should have inquired.”

Jeannie Rhee says they think the exhibits Stone's lawyers gave the judge re: comms with the publisher about dates of publication and distribution conflict with some of Stone's representations about what he knew. Jackson says she hasn't had time yet to study the exhibits in detail

In another bit of news, Stone’s trial date has been set for November 5. Both parties expected that the trial would begin in fall 2019. Mueller said in an earlier filing that the government “anticipates that its case-in-chief at trial, including expected cross-examination of its witnesses by the defense, will take approximately five to eight days trial days to complete.”

Stone is expected back in court for another status hearing on April 30.

Stone’s lawyers previously apologized to the judge for giving her the impression that, when they filed a motion to clarify the gag order, they were attempting to generate publicity for the book. Judge Jackson has already reminded Stone that he is “not on a book tour.” Stone is charged with multiple crimes, namely: a count for obstructing an official proceeding, five counts of making false statements, and one count of witness tampering.

“We regret that the Court drew a contrary impression,” Stone’s lawyers said. “That the New Introduction ‘had been sent to a publisher in January and was scheduled for release in February’ is now certain.”

“There was confusion. We apologize for the confusing representation about publication,” they added.

Recall: Judge Jackson sternly responded to two new Stone publicity issues (and, no, we are not talking about Crosshairsgate). Stone’s Instagram account recently shared an image that said “Who framed Roger Stone” on it. Stone has been barred from making any public statements about his views of his case, whether by phone, Instagram, email or text. The image caught the attention of the Special Counsel’s Office. Even more concerning for the judge, though, was the re-release of The Myth of Russian Collusion.

Stone’s attorneys tried to argue that because the book was authored before the gag order was put in place on February 21 it’s wasn’t a problem. Judge Jackson slammed their motion to clarify the gag order on the grounds that there was no need for clarification.

The judge wanted to know why there was a “misrepresentation” about a book “that is critical of the ongoing investigation by the Office of Special Counsel.”

“On March 4, without providing any explanation for the misrepresentation in the motion, defendant informed the Court that the use of the word ‘imminent’ had been a ‘misnomer’ because the book is already for sale,” she said, adding that it really doesn’t matter anyway because “there is no question that the order prohibited and continues to prohibit the defendant from making any public statements, using any medium, concerning the investigation.”

“It does not matter when the defendant may have first formulated the opinions expressed, or when he first put them into words: he may no longer share his views on these particular subjects with the world,” she said.

In the end, Stone’s attorneys took the heat for this. They admitted they were clumsy, but claimed that they were not hiding anything about the book in question.

“There was/is no intention to hide anything. The new introduction, post February 21, 2019, presented a question we tried, obviously clumsily, to address. Having been scolded, we seek only to defend Mr. Stone and move ahead without further ado,” they said.