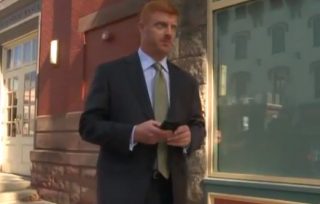 Yesterday, former Penn State assistant football coach Mike McQueary won a civil trial verdict against his former employer for defamation and misrepresentation against him due to his role as the only witness in the Jerry Sandusky criminal case. While he was originally seeking four million dollars, the jury of eight women and four men awarded McQueary over seven million.

This verdict is nonsensical at every level and should offend the sensibilities of everyone who cares about justice. It should also scare the crap out of any institution which deals with children and their potential abuse.

While I have no connection to Penn State, I have covered the so-called “Penn State Scandal” as closely as anyone in the world and I believe that I know more about the real story there than even Jerry Sandusky (who I have interviewed in prison multiple times) does. While I strongly believe that the narrative in the case accepted as “conventional wisdom” by the news media is very wrong, the verdict in the McQueary case is completely insane even if everything most people believe about the case is actually true.

In short, McQueary had absolutely no legal, or even moral, case here. What happened was that the jury pool has been so polluted by five years of over-the-top media coverage condemning Penn State (much of it self-inflicted because the university has accepted, for PR purposes, blame and responsibility for things they didn’t do) that they clearly just felt sorry for the former coach who is now un-hirable because of his connection to the “scandal.”

McQueary’s claim was based on two elements. The first is that Penn State defamed him by originally backing the two administrators who were charged in the case with obstructing the Sandusky investigation (five years later, there has never been a trial on those allegations and almost all of those charges have since been dropped).

This assertion is absurd on its face. McQueary was neither named in the statement by Penn State’s then President Graham Spanier, nor, according to Spanier’s consistent and un-contradicted testimony, was his identity even known to Spanier at that time (one of the key facts people would be stunned to know is that at the time of Sandusky’s arrest, not only did Penn State’s president not know McQueary was the witness, but Sandusky did not either).

How in the world can someone, especially a public figure as McQueary clearly was, be defamed when their identity is neither known, nor even mentioned, by the people whose statement was allegedly defamatory? Perhaps even more troubling, how the heck is simply defending the presumption of innocence of one party (the two charged, and then highly respected, Penn State administrators Tim Curley and Gary Schultz) “defamation” against someone whose testimony in a grand jury was in conflict with them? The mind truly boggles at the potential dangers of such a precedent being set here.

The second key element of McQueary’s lawsuit was that Penn State made a misrepresentation to him about how they would handle his report of having “seen” (actually, more accurately, heard) Jerry Sandusky taking a naked shower alone with a boy on Penn State’s campus. However, there is not a shred of evidence which was presented to suggest that this was the case and, in fact, there was plenty of information provided, including by McQueary and those testifying on his behalf, that this allegation is false (it should also be pointed out that McQueary’s claim here is NOT that he was forced to be part of a cover up, which pretty much destroys the entire cover-up theory because he is the only witness in the case and it’s not much of a cover up without that person).

McQueary’s own father testified, along with family friend who is a doctor, that nothing Mike told them the night of the episode indicated that it was “sexual,” or that he should go the police. That is why the plan was devised for him to call head coach Joe Paterno the next day. This alone would seem to discredit any notion that McQueary told the administrators something which demanded that they do more than what they did in response to his description (which, contrary to popular/media belief, was report it to Sandusky’s employer, The Second Mile charity, which knew very well the almost fourteen-year-old kid who was with Sandusky at that time).

However, even if we presume (without evidence) that the testimony of Curley and Schultz saying that what McQueary reported was not remotely criminal is worthless because they are protecting themselves, there is still plenty to discredit Mike’s allegation. Specifically, Penn State’s legal counsel testified at the civil trial that he was told right after McQueary’s meeting with Paterno (which was immediately relayed by Paterno to his superiors) that Mike’s report was of “horseplay.”

But the most devastating evidence against McQueary’s claim that his report back in the 2001 (tellingly, McQueary got the date, the month, and the year of the episode dead wrong in his first two testimonies) contained some sort of horrific sex act, comes from his own testimony in December of 2011. At a preliminary hearing he claimed that he had told people in the football program that Sandusky should not be hanging out around the locker room. That sounds like really solid evidence that he really did see/hear/report something awful. However, on cross-examination, McQueary admitted that he only started to feel that way ten years later AFTER investigators had come to him for help in a sex abuse inquiry against Sandusky. Clearly, McQueary’s view of what he had witnessed had changed dramatically in the ensuing decade.

It appears that the jury, brainwashed by five years of awful media coverage, simply presumed facts never presented and assumed that the Penn State administrators had already been convicted of crimes (which they never will be). In short, Penn State is “bad” and McQueary is “good” because he helped bring the horrible Loch Less Monster that was Jerry Sandusky to justice. Clearly motivated by sympathy/emotion rather than logic/law, they gave him five million dollars in punitive damages, even though the evidence at trial overwhelming indicated that when he was let go from his job along with the vast majority of the staff after Paterno’s shocking firing, it was purely for football reasons and had nothing to do with his role in the Sandusky case.

So, in the end, Mike McQueary, a guy who, at best, saw something bad happened to a kid, ran away without doing anything at all to get the boy out of danger, and did a poor job of articulating to superiors what he supposedly witnessed, is rewarded with an over seven million dollar judgment. So now I guess anyone who says anything at all to a superior remotely about child abuse which doesn’t result in an immediate arrest can sue over a decade later if the person they report ends up getting convicted of such crimes? Gee, that doesn’t sound like a Pandora’s Box just waiting to be opened!

Of all the insane-making elements of this unjust verdict, the most bizarre is that McQueary is now owed over twice as much money by Penn State as the boy (so-called “Victim 2” who has given numerous statements saying he was not abused in the shower and who was never called to testify at Sandusky’s trial). Think about that. The guy who, at best, botched witnessing and reporting the event, may get twice as much money as the person Penn State paid for being the kid who was there that night (and allegedly the victim)!

By the way, next Friday, that now twenty-eight-year-old man is scheduled to finally testify for the very first time in during Sandusky’s next appeal hearing. I plan on being there. If he tells the truth about that night then the complete insanity of the McQueary civil verdict will be breathtakingly obvious, maybe even to the completely clueless news media covering this case.

This is an opinon piece. The views expressed in this article are of this author.

John Ziegler is a nationally-syndicated radio talk show host and documentary filmmaker. You can follow him on Twitter at @ZigManFreud  or email him at [email protected]