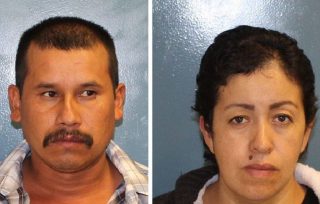 Cecilia Bravo Cabrera and Francisco Yanes Valdivia were a married couple living in California. But it turns out that Valdivia was already married to Rosalina Lopez, whom he wed in Mexico in 2007. Now, Cabrera has been missing since June, presumed dead, with her husband and his other wife arrested for her murder, according to the Tulare County Sheriff’s Office.

Sheriff Mike Boudreaux announced the arrests on Tuesday, but kept quiet on the details of the case. “Clearly, this is a circumstantial case, but we are both comfortable and confident in our belief that Cecilia Bravo Cabrera was murdered,” he said, adding, “I am confident these are the people responsible for her death.” The Sheriff’s office said in a Facebook post that there is digital forensic evidence against Valdivia and Lopez, who had also previously threatened Cabrera’s life.

Cabrera was last seen at the Tachi Palace Casino after midnight on June 9. Authorities say, hours later, her car was found burned out in an orchard. California Highway Patrol officers then went to her house and learned that she had gone out with her husband the day before. Cabrera’s children didn’t know where she was, and she had gone silent on social media, where she had been active up until her disappearance. Her body has yet to be found.

Bourdreaux said that Valdivia, who is Mexican, married the American Cabrera to obtain legal U.S. citizenship, according to the Sacramento Bee. Valdivia was already incarcerated for a marijuana offense and was supposed to be released this week, before he and his other wife were charged with murder.