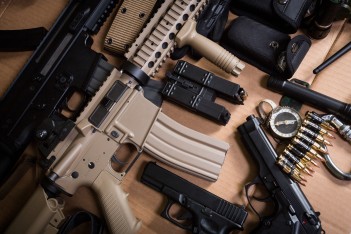 U.S. Senators on Monday failed to obtain the necessary 60 votes to move forward with all four gun control proposals related to background checks, just over a week removed from the largest terror attack on U.S. soil since 9/11.  The attack at the Orlando nightclub was also nation’s deadliest mass shooting.

The measure failed by a 53-47 vote, with two Republican Senators, Mark Kirk and Cory Gardner voting against proceeding with the plan and Democratic Senator Joe Donnelly supporting it.

Democratic opposition was led by Sen. Chris Murphy who The Hill reports called the proposal “a shield for members who do not want to do the right thing.”  Instead, along with Senators Charles Schumer and Richard Blumenthal, Murphy offered a Democratic counterproposal to require background checks on “for most sales or transfers of guns,” the report states.

Republican Sen. Kelly Ayotte told reporters she had concerns that Sen. Murphy’s proposal was “very broad,” but she reaffirmed her belief that it is “important to fix the current system.”

But the Senate was not done with the issue, failing to obtain the necessary 60 votes to move forward on two additional gun control proposals a bit later on Monday.

Sen. John Cornyn offered a proposal to allow the Attorney General to place a 72-hour hold on the purchase of a gun made by a suspected terrorist.  Any person who had been the subject of a terrorism investigation within the past five years would be subject to the 72-delay under this proposal.  During the 72-hour period, the DOJ would be able to investigate the buyer and obtain a court order to stop the purchase.

Sen. Cornyn’s proposal failed by a vote of 53-47 with critics reportedly arguing the bill would force the federal government to prematurely disclosure some terrorism investigations.  Democratic Senators Joe Manchin and Joe Donnelly voted in favor of the Cornyn proposal, but Republican Senators Susan Collins, Jeff Flake and Mark Kirk voted against it.

Sen. Majority Leader Mitch McConnell pressed hard for passage of the Cornyn proposal, telling Democrats the measure reasonably addressed all matters that allowed the Orlando shooter to obtain a weapon.

Democrats, however, had their own ideas and largely supported a proposal put forth by Sen. Diane Feinstein.  According to the report, Feinstein’s proposal differed from Cornyn’s in that it would allow the Attorney General to block the sale of a gun to anyone that had been under a terror investigation in the past five years.  Furthermore, the proposal provided if there was “reasonable suspicion” an individual has or will be involved in a terror attack, the Attorney General was empowered to block the sale of a gun or explosive to that individual.

The Feinstein measure failed by a vote of 47-53 with Republican Senators Mark Kirk and Kelly Ayotte breaking ranks and voting for passage with the Democrats.  Meanwhile, Democrat Heidi Heitkamp voted against the proposal.

Critics of the Feinstein proposal, including Sen. Cornyn, said while everyone seemed to agree “that terrorists should not be able to purchase a weapon…. [t]he question was whether [they could come to agreement] to do so in a way that’s constitutional.”