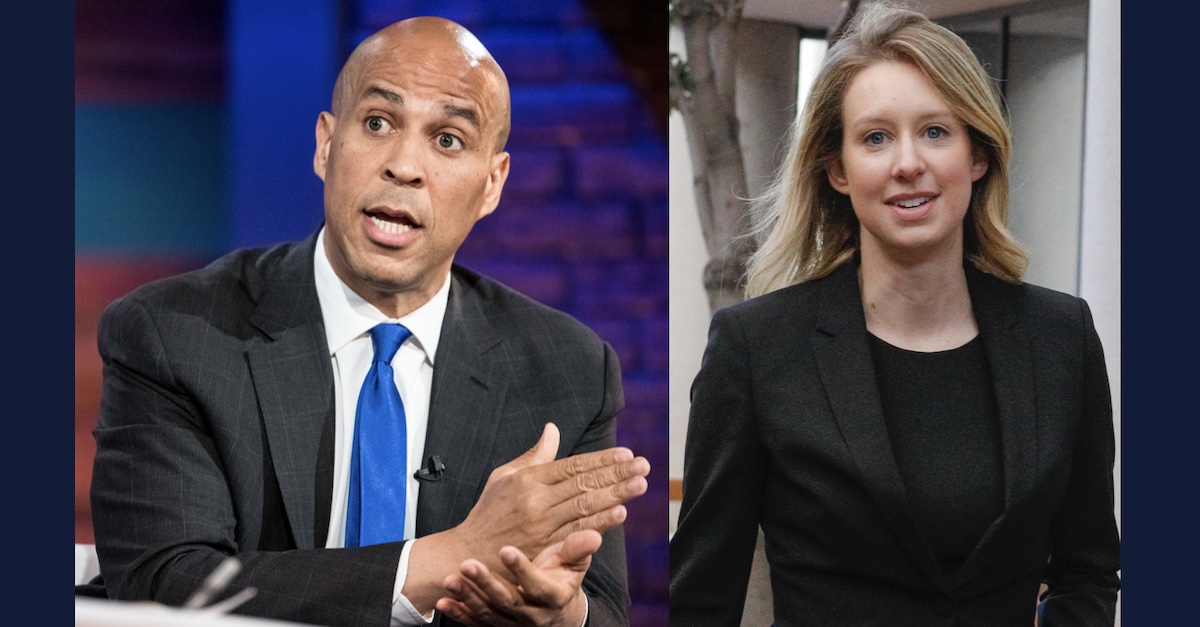 Senator Cory Booker (D-N.J.) has turned his criminal justice reform efforts to convicted fraudster Elizabeth Holmes, asking a federal judge to impose a “fair and just sentence” on the Theranos founder, whom he describes as a years-long “friend.”

“As author Bryan Stephenson has said, each of us is more than the worst thing we’ve done. I firmly believe in the possibility of rehabilitation and in the power of redemption for anyone,” Booker wrote in a two-page letter dated Sept. 9 and released on Thursday evening. “And I believe that Ms. Holmes has within her a sincere desire to help others, to be of meaningful service, and possesses the capacity to redeem herself.”

The prominent senator’s letter was one of roughly 130 that Holmes’s attorneys submitted late on Thursday, seeking to bolster their argument that their client is “a singular human with much to give” if spared a prison sentence.

Booker, whose letter was released through Holmes’s defense team, echoed the same sentiment in his letter.

“From my faith, I believe in, and try to hold myself to the difficult standard of unconditional love. Thus, although our communications have been more limited in recent years, I continue to consider Ms. Holmes a friend,” Booker continued. “I still believe that she holds onto the hope that she can make contributions to the lives of others, and that she can, despite mistakes, make the world a better place.”

Touting his criminal justice reform record, Booker did not write his letter on official letterhead, but a spokeswoman confirmed its authenticity in an email to Law&Crime.

“Sen. Booker is unavailable but I would point you to the Senator’s letter for his comments on this matter,” Maya Krishna-Rogers wrote.

The letter is addressed to U.S. District Judge Edward J. Davila, who is scheduled to sentence Holmes on Nov. 18.

Booker said he knew Holmes for “about six years” before she was charged in 2018 in a wire fraud case related to her fundraising efforts for Theranos, which she touted as a revolutionary blood-testing company built on unprecedented technology. Holmes started the company after dropping out of Stanford University, the senator’s alma mater. They met at a public policy conference hosted by the late Arizona Republican Sen. John McCain (R-Ariz.), Booker wrote, “bonding at a dinner when we discovered we were both vegan – there was nothing to eat, and we shared a small bag of almonds.”

Elizabeth Holmes and @CoryBooker met at a public policy conference hosted by John McCain, “bonding at a dinner when we discovered we were both vegan – there was nothing to eat, and we shared a small bag of almonds.” pic.twitter.com/SuWZ7VTiqg

Booker does not appear to have publicly acknowledged his friendship with Holmes until now, but he tweeted a link to an op-ed she wrote in 2015, writing, “Compelling read from @Theranos founder Elizabeth Holmes: ‘People should be able to get any lab test on their own.'”

Compelling read from @Theranos founder Elizabeth Holmes: “People should be able to get any lab test on their own.” http://t.co/ncVC3PyXbi

His letter to Davila, a 2011 Barack Obama appointee in the Northern District of California, doesn’t recommend a specific sentence, but Holmes’ lawyers at the Washington, D.C.-based Williams & Connolly LLP are asking for home detention or, if Davila deems a prison sentence necessary, one of 18 months or less.

Filed late Thursday, their 82-page memorandum said that accepting a home detention sentence “may seem a tall order given the public perception of this case—especially when Ms. Holmes is viewed as the caricature, not the person; when the company is viewed as a house of cards, not as the ambitious, inventive, and indisputably valuable enterprise it was; and when the media vitriol for Ms. Holmes is taken into account.”

“But the Court’s difficult task is to look beyond those surface-level views when it fashions its sentence. In doing so, we ask that the Court consider, as it must, the real person, the real company and the complex circumstances surrounding the offense conduct, and the important principle that ‘no defendant should be made a martyr to public passion,'” the memo reads, citing a 2012 opinion by Southern District of New York U.S. District Judge Jed Rakoff, regarding the insider trading case of former Goldman Sachs director Rajat Gupta.

A federal jury on Jan. 3 convicted Holmes of three counts of wire and one count of conspiracy to commit wire fraud, following a three-month trial that brought huge crowds to the San Jose federal courthouse, including some Holmes fans who dressed as her. Davila earlier this week rejected her three motions for new trial, setting the stage for another wild day as reporters from around the country descend on his courtroom for what could be the final chapter in a saga that’s led to documentaries, podcasts and a general obsession among some. Sentencing is scheduled for next Friday at 10 a.m.

Holmes’ co-defendant and former boyfriend, ex-Theranos chief operating officer Ramesh “Sunny” Balwani, is scheduled to be sentenced Dec. 7 after being convicted of 12 counts.

Spanning 282 pages, Holmes’ support letters begin with an eight-page letter from her partner and father of her young son, William “Billy” Evans, who told Davila “you hold the life of my partner in your hands. The letter details a relationship that began post-indictment, with Evans saying he met “Liz” at a friends charity event in fall 2017, where he was “captivated by her childish wonder and authenticity.” They stayed “just friends” for six months, Evans wrote, as he was “admittedly hesitant to dive in given all that had been said, Liz had been consistently vilified in every piece of media imaginable.”

“It wasn’t just a few bad articles in the WSJ [Wall Street Journal], it was a character assassination that had been amplified in an echo chamber of a thousand loud voices,” Evans said.

Evans included four pages of family photos showing he and Holmes vacationing, spending time with their son, sleeping and one of Holmes working from a hospital bed. 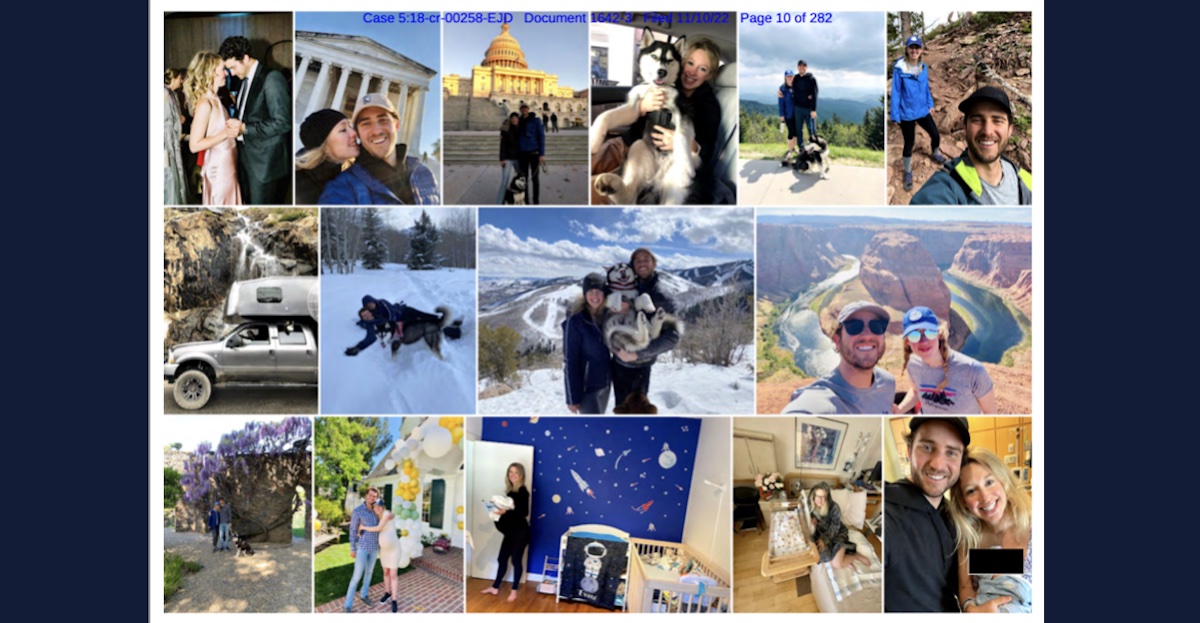 The letters also include a three-page one from William Foege, who was director of the Centers for Disease Control and Prevention from 1977 to 1983, that said he “became involved with Theranos when Senator Sam Nunn asked me to visit and get a briefing on what Theranos was doing.”

“He was on the board of Theranos and his request resulted from his days as Senator from Georgia and our contact when I worked on the smallpox eradication program at CDC,” Foege wrote.

Much of Holmes’ lawyers recommendations regarding total loss calculations, which are essential to wire fraud sentences, are redacted from the public court filing, but they’re arguing prosecutors can’t prove the $1.54 million she got in salaried compensation between 2010 and 2015 was connected to criminal activity. They’re also arguing prosecutors can’t prove “a substantial loss”, and even if Davila believes they can, Holmes still deserves a sentence below the standard guideline range.

They also say Theranos wasn’t a Ponzi scheme — “it was a real company,” which prosecutors don’t dispute.

“It developed valuable, innovative technology (assays, hardware, and software), including inventions and advancements that were recognized as innovative by the United States Patent & Trademark Office. It had real commercial relationships and provided real services to customers. The investments were not used to line Ms. Holmes’ pockets or those of anyone else; to the contrary, the investments went toward the company’s mission to make health information more accessible,” according to the memo.

Evans describes Holmes’ deep bond with their son, and her lawyers write in their memo that she “is deeply devoted to her partner and son, and plays an integral and irreplaceable role in their lives.”

“Ms. Holmes has lived her life with a purpose to change the world for the better, on scales large and small. These basic qualities motivated her in founding and leading Theranos, and they continue to shine in the way she lives her life today. She is the person her friends turn to when they need support, regardless of what is going on in her life,” according to the memo. “ Ms. Holmes lives with this kindness, purpose, and selflessness despite significant personal trauma that occurred before and during the time period of the offense, and from which she is still recovering.”

Prosecutors have not yet filed their recommendation.