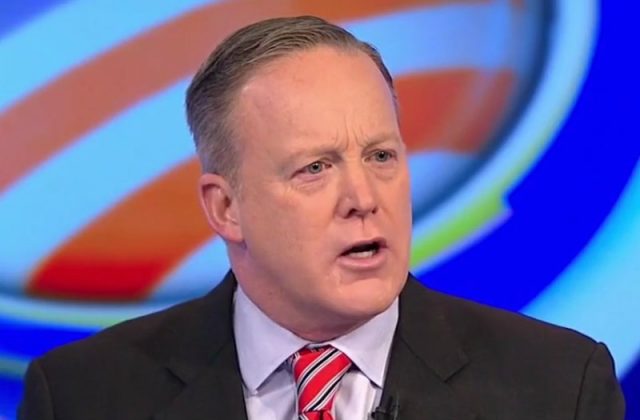 Okay this is weird. This morning, Axios’ Mike Allen reported that former White House Press Secretary threatened legal action against him.  Here’s how it went down. Allen was reporting on Spicer’s copious note taking practices, and contended they could potentially be a gold mine for Special Counsel Robert Mueller’s investigation. Reportedly, Spicer took notebooks full of notes when he was at the RNC, Trump campaign, and the White House.

When Allen asked for comment from Spicer, here is what happened:

When we texted Spicer for comment on his note-taking practices, he replied: “Mike, please stop texting/emailing me unsolicited anymore.”

When I replied with a “?” (I have known Spicer and his wife for more than a dozen years), he answered: “Not sure what that means. From a legal standpoint I want to be clear: Do not email or text me again. Should you do again I will report to the appropriate authorities.”

So what exactly could Spicer do from a legal stand point? Well, unless there is more to this story, not a whole lot of anything. A reporter is breaking no law by asking a source for comment on a story he is writing about. In fact, that is pretty standard journalist practice. Perhaps if Mike Allen sent him texts all of the time, and Spicer thought it was “harassment,” he could file a police report. Even then though, he would have a pretty heavy burden to prove that Allen was go beyond NORMAL journalism.

Ah, the full Spicer. First do something stupid, then follow up with a belligerent response that shows no understanding of the situation. https://t.co/jipDXIPtCF