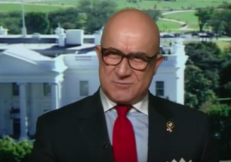 The investigation is focusing on foreign payments made to Flynn’s now inactive company, the Flynn Intel Group, and whether these transactions were legal. Payments of interest include money from Inovo, a company based in the Netherlands but led by Turkish businessman Ekim Alptekin, and three Russia-based companies, the Reuters report detailed.  Two different sources familiar with Flynn’s business proceedings reported that Kian played a key role in monitoring the contract with Inovo. Kian was also present during Flynn’s September 19th meeting with the president of Turkey’s son, who also serves as his foreign minister and energy minister.  The two registered themselves as foreign agents afterwards.

The FBI’s intent with Kian is unclear: it is unknown if Kian is being criminally investigated for lobbying alongside Flynn or if the FBI is simply seeking to gain more information on Flynn’s business operations.

Elijah Cummings (D-M.d.), the top Democrat for the House Committee on Oversight and Government Reform, separately expressed his interest in Kian in an email to Reuters: “I have an interest in Bijan Kian and his interactions with General Flynn based on specific documents already obtained by the Committee,” he wrote.

Neither Kian nor the FBI have publicly commented on the matter.